Yesterday I had a client that was worried about her seven month old puppy being aggressive.  In the exam room the dog was energetic and sweet with no signs of behavioral problems.  As I questioned the owner and delved into the behaviors I realized that the owner was describing normal play behaviors.  It's actually not uncommon for an average pet owner to be confused, as some play behaviors in dogs can appear aggressive.  And since animal behavior is a strong interest of mine, that's today's blog topic.

Here is a recent picture of my two dogs:  Inara on the left and Yvaine on the right. 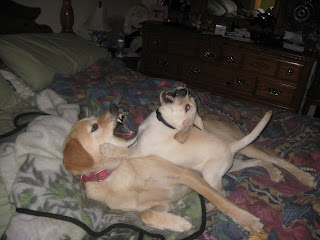 Looks pretty fearsome, right?  That's actually them just playing around and neither one is aggressive.  In animals, play behavior is often practice for life as an adult.  Carnivores will practice stalking and hunting.  Social animals will practice behaviors that will determine social hierarchies.  It's just like human children playing "house" or pretending to have jobs.  Childhood is a good time for any animal to start learning and honing skills they will need to be successful later in life.  So in pets you will see behaviors that may seem like hunting, aggression, and so on.

So what indicates play?  There are some key behaviors and body languages you can look for.
1.  The most common and universal behavior is the "play bow".  In dog language this is an invitation to play.  The front end will be down and the hind end raised.  Whenever you see this the dog is in play mode, even if there are seemingly aggressive vocalizations. 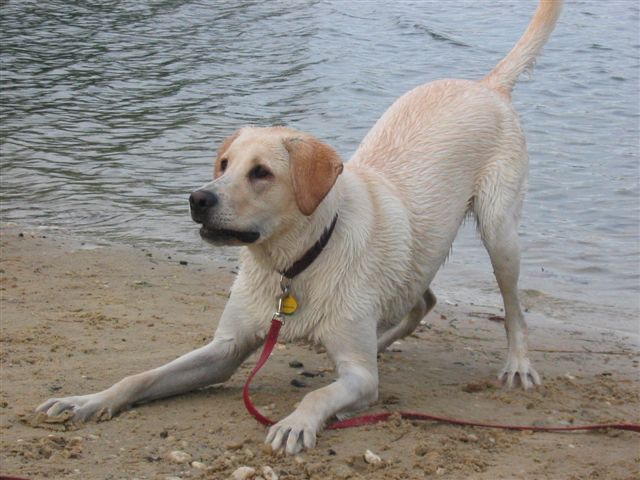 2.  Another common behavior is a "play face".  This is universal across animal species.  The eyes are wide, the mouth somewhat open, ears normally erect and alert, and the face relaxed.  Like the play bow, this is a sign of playfulness. 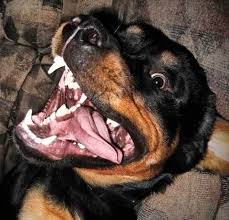 3.  Wagging tails are also a good sign.  However, some dogs will wag when they're nervous or uncertain.  If a wagging tail is seen with the above behaviors it's play.  If there are raised hackles, fierce barking, or bite attempts, it's a sign that the dog is uncertain how to react to the situation.
4.  Many dogs will bounce from side to side or forwards and backwards when they are wanting play.  Like the play bow this is an invitation behavior.  Basically the dog is saying "Hey, come get me!  Play with me!"
5.  Barking and even growling, when combined with the above behaviors, is merely an indication of play.  It's like kids yelling and shouting at each other during wrestling or a ball game.
6. Dogs don't have hands and fingers to manipulate their environment.  Instead they use their mouths and teeth to interact and grab things.  So biting or grabbing during play is common and normal.  It may not be desired, and should be discouraged and trained out of the dog.  However, it's not a sign of aggression.

Looking for these behaviors should tell you when a dog is playing.  If you're worried about aggression here are some signs to look for.
1. Raised hair on the back and neck (though Inara will do this during play sometimes, so with her I've had to look at the other behaviors).
2.  Tail straight or lowered and not wagging.
3.  Ears back or down.
4.  Persistent growling for several seconds or minutes and not just for brief spurts.
5.  Lunging with fierce barking.

Dog's don't commonly show all of the signs at once for any behavior, so look for some of the signs and use your best judgment. If you don't know the dog and there are any signs of aggression, please do not interact with that dog!  If you're worried about your own dog's behaviors, find a vet who is skilled with animal behavior and have him or her evaluated.
Posted by Chris Bern, DVM at 11:31 AM