Chameleons are really interesting animals.  Their tongues are the most classic part of them but the rest of their anatomy is equally interesting.  My favorite part is their eyes, being able to move and focus independently.  The eyes are normally prominent, so it was unusual to see a patient with them bulging.

The client drove a good while to get to me since I'm one of the few vets in my area that will see exotic pets.  When I heard that the lizard had bulbous eyes I immediately started thinking about an abscess or vitamin A deficiency, both of which can cause swelling of or behind the eyes.  But when I examined him I started to realize that the appearance didn't fit with either problem. 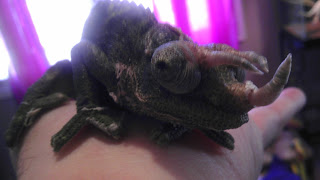 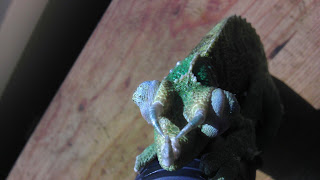 This had been going on for about a month, gradually getting worse, and was suspected to have started after falling from his foliage.  As it worsened the chameleon's appetite decreased, likely in part because of pressure and discomfort behind the eye as well as difficulty moving the eyes to see the food.

The swelling appeared to be behind the eye itself, within the socket.  I carefully lanced the swelling and was surprised to get a large amount of blood from the puncture.  Even more shocking was that the swelling reduced behind both eyes, even though I only lanced one side.  This meant that there was an injury behind the sockets in the space between the eyes.  However, I couldn't figure out why the blood was still liquid rather than clotted and how he had been bleeding to some degree for so long without getting even worse.

Never having seen anything like this I made a couple of phone calls.  One was to a local exotics specialty practice to speak to the lead doctor there.  He had never heard of this before even though all he did was non-traditional pets.  My next call was to a vet friend of mine in Oklahoma who has extensive practical experience with reptiles.  I managed to stump him as well.  Neither of these experts could figure out what might be going on, and more importantly how to fix it.

This is one of those situations where we elected to do nothing because we couldn't figure out something safe to do.  If we kept draining the swelling we could cause anemia or infection and surgery at that location would be highly risky.  The owner could hand-feed him and elected to do so, hoping for the best.

I really hate not being able to figure out a problem!  Thankfully the client was very understanding about the unique problem and the fact that three vets had no idea what was going on.

Veterinary medicine is not an exact science.
Posted by Chris Bern, DVM at 10:13 PM