In early 2012 I posted about a surgery I did to remove a prolapsed hemipenis on a gecko.  Earlier this year I did a similar surgery on a chameleon, and last week I was faced with a California king snake with the same problem.  This was an interesting case because the snake was 20 years old and the owners had acquired him about 18 years ago.  They had cared for him well for the last nearly two decades without any problems at all.

When I examined him the prolapsed hemipenis was pretty obvious.  What they hadn't really noticed was the bruising on his tail beyond the cloaca (yes, snakes have tails).  The skin in that area appeared damaged and dying, as if it had been injured there.  A compression injury could have caused the lesion as well as prolapsed the hemipenis, but he wasn't taken out of his tank much and there was nothing he could have pinched himself in.  You can see the bruising well in these photos. 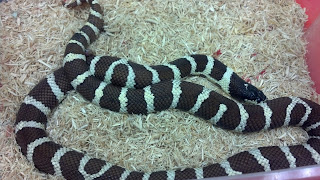 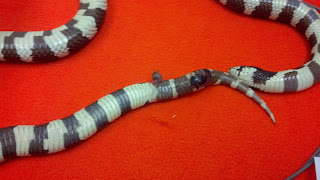 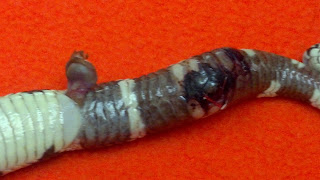 After being anesthetized it was easy to ligate and remove the hemipenis.  Since he was unconscious I decided to remove the dead and devitalized skin, expressing a large amount of clotted blood and bruised tissue.  The healthy skin was sutured together and the wound closed. 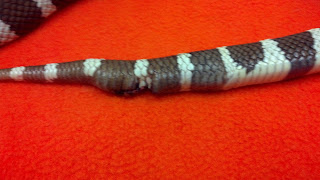 I expect him to make a full recovery, but I don't think we'll ever know how he became injured.  This was a fun case for me as I don't get to see snakes as often as I like and this was a nicely behaved one.
Posted by Chris Bern, DVM at 10:38 PM