Back in July, I received a question about a very strange case (you can review it here).  Last week I received this update from Denise.

I am sure you remember me, I have the cat 'Skeeter' and you ran a post on her and helped me when her wrists had broken down.  I wanted to update you.  Skeeter deserves to be on the show Medical Mysteries.

When the 8 kittens went to kitten food, I had them on Purina One Chicken and Rice Kitten.  At about 6 or 7 mos old I believe, could have been sooner, I switched them to Diamond Naturals Kitten food.  If you recall she was about 10 mos when I noticed the wrists breaking down.

A few months later I switched her and all my others back to Purina One Chicken and Rice.  The second week of October (she was at this time 13 mos old) I noticed she was not toeing in so much and that her wrists were straightening out.  I attached two photos taken the 13th, showing how they were straightening out on their very own.  Today they are almost perfect, I need to get updated photos.

We did not go for surgery or any treatment and she has not been spayed even.  With my daughter having a baby we opted to hold off, more monetary wise than anything and hoping to get her to CSU when we move back to Denver.  Skeeter's wrists broke down even more in August and September and I was really getting worried about her legs and healthy lifespan.  But wham, all of a sudden they fixed themselves.  Nothing else has changed, I am not sure if the food is what caused it and corrected it with switching back or what happened.  Maybe a calcium deficiency in the Diamond?  I would think that Diamond beats Purina in nutrition but my cats have always done very well on it, healthy, happy, super shiny coats, and now the mystery cure for her.

One thing I am so glad about is, that I did not have the money for surgery and we were forced to wait, or we probably would have had he go through the surgery. She would have had both front legs fused for life and the problems that probably would have come later from the surgery, and for nothing.  Her legs just keep getting stronger.  Right now I suppose it is a mystery if they will stay corrected, but it so far it appears they will.  She is back to retrieving and playing like she did prior, she is back to herself.  She is a beautiful cat and this is just amazing.

Do you have a clue?   I am just so elated and was so stoked when I noticed they were correcting them self.  So bizarre but a true blessing! 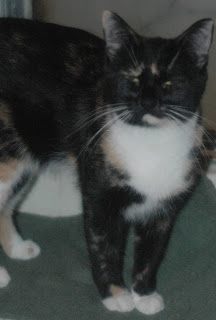 That is certainly a strange situation.  Purina ONE is a good food, and the Purina company overall does good nutritional research.  But I don't think it would be significantly different than Diamond, which is also a good food.  I doubt it was a single deficiency in the food, as you would notice it with your other kittens.  Also, a severe calcium deficiency would have resulted in more problems than dropped wrists.  Honestly, I think that they probably healed on their own as she continued to grow and develop.  A very, very odd case! I sometimes tell clients that pets will get better in spite of us rather than because of us.  In the end, I'm not bothered by this as long as the pet is better.  Keep me updated on Skeeter!