***WARNING:  Graphic images in this entry!  Proceed at your own risk!  Seriously gross stuff ahead!***

Heat and humidity are never good when you're dealing with skin irritation and wounds.  Here in the southeastern US there are certain things we can just about count on in the Summer because of the kind of climate we have.  Maggots are one of those things.

I've dealt with these situations countless times over my career, and the scenario is always similar.  The dog or cat spends a lot of time outside and isn't examined closely by the owners.  In some cases the pet is severely matted and skin irritation develops under the mats.  In other cases a wound is caused by a bite, puncture, or other source.  In either situation there is exposed, damaged, open tissue.  This kind of environment draws the attention of flies, who lay their eggs on the diseased tissue.  The eggs hatch and the larval flies (maggots) begin feeding on the dead tissue.

In one way, this isn't a bad thing as this kind of maggot only eats dead or diseased tissue, thus leaving healthy tissue behind.  However, that doesn't clear up the infection, and as long as the condition progresses there will be more and more necrotic tissue on which the maggots can feed.

One of my first maggot cases was back in my first year of practice.  A heavily matted mixed breed dog came in and there was a strong odor from its back.  We realized that there was heavy skin infection under a thick layer of mats and so we began to trim the matted fur away.  As we did so we quickly saw a writhing mass of maggots.  This was about a 30 pound dog and the entire back of the dog's fur came off as one giant mat.  Underneath the skin had become infected, and since the dog was kept mostly outside it developed a horrible case of maggots.

Here's the gross part of that story.....one of the staff was named Earl.  He was a really nice guy, very good with the animals, incredibly caring and fun, and pretty much immune to the things that happen in a vet clinic.  Earl took the dog to the back to bathe it and wash off the maggots and diseased tissue.  A minute or two after he went to the tub area we heard a horrible scream.  All of us rushed back there to see Earl retching and spitting onto the floor.  Apparently he had put the water sprayer on high, and when he first started washing the dog the spray hit the maggots at just the right angle and force to cause them to fly up into his face.  And his mouth was open!  He got a big faceful and mouthful of maggots!  I will never forget that moment.

More recently a family brought in their elderly, outdoor cat for lethargy and diarrhea.  At least, they had assumed it was diarrhea because of the wetness and horrible odor from around the cat's hind end.  When I took a look at it I quickly noticed the moisture was to one side of the rectum, more on the thigh.  And then I lifted up a matted area of fur, revealing a deep, gaping wound filled with maggots. 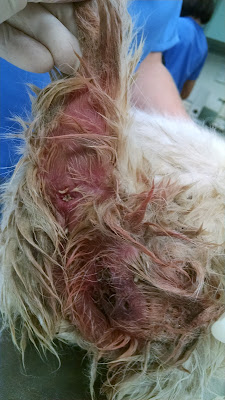 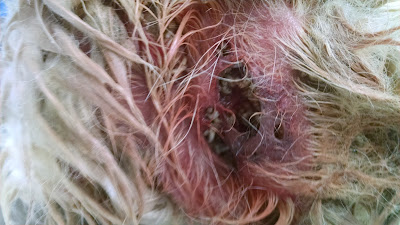 That was definitely not what I expected to see when they brought the cat in for "diarrhea", but it didn't surprise me considering the heat and humidity of a Georgia summer.  If you look closely at the top photo you'll notice that some of the maggots were crawling out of the rectum.

Here are a few pictures with better lighting, where you can better see the maggots and extent of the wound. 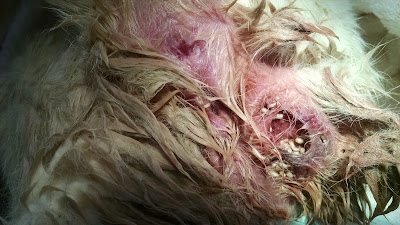 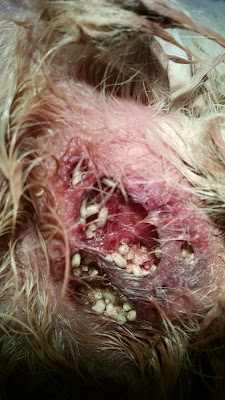 I almost took a short video to show just how disgusting this really is.  All of those maggots were moving and writhing, obviously enjoying their meal.

I suspected that this was caused by a bite wound that went undetected under the cat's long fur and mats.  As I mentioned previously, the wound was a great location for flies to lay eggs, and because there hadn't been treatment the infection had destroyed a significant amount of tissue.  While there was a decent chance of eventually curing this cat, it would have involved an incredible amount of treatment, including major reconstructive surgery.  The total treatment would have easily run into several thousand dollars, mostly due to the necessity of surgery, skin grafts and so on.  Because of the amount of treatment needed, the owners elected euthanasia.

Since this cat spent most of her time outside and was difficult for the owners to catch, they didn't realize the problem was this bad.  So I don't blame them for letting this go so long.  But this is a cautionary tale for pet owners with pets who stay outside.  Be very observant of your pets, as this could have potentially been caught earlier with a daily brief exam.
Posted by Chris Bern, DVM at 7:22 PM