Proud To Be American

Today is Independence Day, considered the birthday of the United States of America.  And I have to say that I'm very proud to be an American.  In fact, I think the world would be a much worse place without the USA.

America and Americans have done amazing things.  We have helped revolutionize technology and industry.  We have helped stop dictators in two World Wars and fought against more during the Cold War.  Our economy has helped stimulate global trade.  We have been a country steeped in innovation and independence for our entire history.  The American entertainment industry has set standards around the world.   American brands and characters are recognized in every country.

Does this mean that the rest of the world doesn't matter?  Or that America doesn't fail?  Or that it doesn't have faults?

While Americans have made significant contributions to science, we don't want to ignore the discoveries of Europeans, Chinese, and others.  Linnaeus and Copernicus are just as important as Edison and Ford.  While we have helped innovate technology, the Japanese often do better.  Our automobiles are generally very good, but the Swedes, Germans, Japanese, and even Koreans have learned to make them just as well.

We have made plenty of mistakes as a country.  We treated the American Indians abhorrently.  We were one of the last to outlaw slavery.  We failed in our war efforts in Vietnam and Korea.  Bad fiscal policies lead to global market crashes in the 1930s and 2000s.  We have upset allies, rattled our saber when we should have sat at a negotiation table, funded evil people who eventually became our enemies, and oppressed our own citizens.  Even today we have problems with violence, racism, poor national policies, and numerous conflicts between our people.  And I am less than thrilled at several very bad decisions by the US Supreme Court in the last couple of weeks.

But through it all we survive and grow.  Though racism is not eliminated (an never will be in my opinion), the situations are far, far better in 2015 than they were in 1955.  Though we hear a lot about violent crimes and mass shootings, FBI statistics show that violence as a whole has been trending downward for decades.  Though we may not dominate the global economy as we once did, we are often finding ourselves still being innovators.  And despite bad things that people may say about America, we are still such a desirable place to live that millions of people break the law and risk their lives to come here.

Yes, I'm patriotic and a nationalist.  But I also understand and respect other countries and cultures.  My own father is an immigrant, and though he may disagree with many of the things happening in the US (especially from the Right Wing side of things), I don't think he would look back and think it was a mistake to move here and become a citizen.  I also love talking to people from other countries and visiting those other lands.  Being proud to be an American doesn't mean that I hate or discount other countries or their citizens.

This is all a long way of saying "Happy 239th birthday, America!"  I still pray for God's blessings on us, and that we will overcome the challenges and differences that face us.  While I look forward to visiting other places around the world, I will never want to call anywhere else my home. 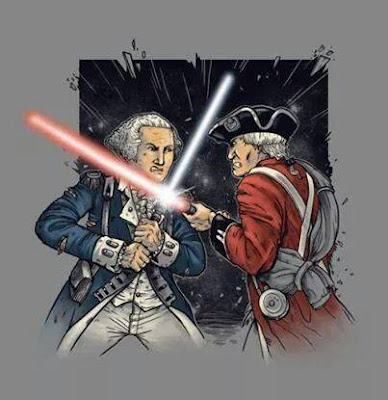