Every year I see several cases of dogs being bit by snakes.  So the inevitable question comes up, "are snake bites really deadly?"  Here's my typical somewhat tongue-in-cheek reply...."It depends".

The "depends" relies heavily on the type of snake.  Even among venomous snakes some are much more deadly than others.  Thankfully in my area we only really have to worry about copperheads and cottonmouths (water moccasins).  Neither of these is particularly deadly with a single bite.  However, there are several snakes in the US that can cause fatality (especially coral snakes and some rattlesnakes), and you should always take them seriously.  If you have any questions about the lethality of venomous snakes in your area, check with your vet (especially those of you in Australia....from everything I've read your country is out to kill you!).

Most of what people seem to know about snake bites originates in Hollywood myth and hype.  If a snake bites you need to put a tourniquet on and suck the venom out of the wound!  You need to elevate the limb!  You have minutes to get to a doctor and be given antivenin or YOU WILL DIE!  Thankfully none of that is true, and while a known or suspected snake bite is absolutely an urgent case most pet owners aren't in areas with truly lethal snakes.  Those of you who are.....ignore the rest of this blog!

So what do you do if your pet is bit by a snake?  The first thing you do is stay calm.  Don't panic as that can make the situation worse.  The next thing you do is call a vet and get your pet seen immediately.  If you live in an area with highly venomous snakes the veterinary staff will be able to tell you exactly what you need to do, even if that may be going to a local emergency clinics.  Most snake bites don't require antivenin to treat, so few vets carry it.  Local human hospitals and veterinary emergency clinics will stock antivenin if there is risk in the area, so your primary doctor may refer you to an veterinary ER rather than coming to them first.  For most other snake bites it would be considered urgent enough to go to an emergency clinic if your vet is closed, but not an immediate life or death situation.

Don't try to put a tourniquet on the wound, suck the wound, or anything else you've seen in movies.  Leave it alone and get your dog to a vet right away.

Most bites that I've seen have been from copperheads, simply because they are the most common venomous snake in the areas I've lived.  Typically with this kind of snake there will be an intense local reaction with inflammation, tissue damage, and secondary infection.  The area around the bite looks really bad, but the dog is overall okay.  There is a risk of clotting disorders due to the body's reaction to the venom so a vet typically runs blood tests as part of the treatment and will instruct the owner to watch for unusual bleeding, bruising, and so on.  But a single bite shouldn't be fatal unless the dog has an anaphylactic reaction.  I've seen Yorkshire terriers bit in the face who still survived and just had a bad localized problem.

Here are photos from a dog I recently saw who was bit on the paw.  Most snake bites are on the paws or the face, because the dog is either stepping on a snake it doesn't see or is putting its muzzle close to examine the animal.  You can clearly see that the dog's left leg is significantly swollen as a reaction from the bite.

Both legs next to each other for comparison. 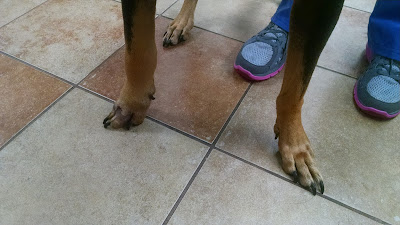 A closer look at the normal leg. 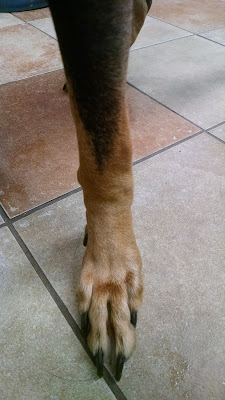 The leg that was bit. 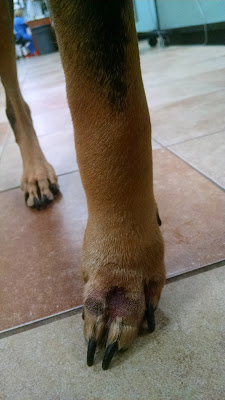 The wound itself was minimal and the dog was acting normal other than a little sore in that leg.  All blood tests were normal and we treated with antibiotics and pain medication.  The leg healed well and the dog will be fine.  In cases of severe local reactions there could be a need to surgically remove damaged tissue, but this isn't common.

Again, please understand that I'm talking about mildly venomous snakes and my comments shouldn't be extended towards every kind of snake bite.  There are significant variations in the kind and strength of venoms, so you should always take a bite seriously and seek immediate veterinary care.

As I've never actually treated a patient for a potentially lethal snake bite, I'd love to have comments from vets who have done so!
Posted by Chris Bern, DVM at 1:22 PM