I had a rather scary problem today, and one I've faced before.  A terrier-mix had been having mysterious pain for a week or more.  Another vet had taken radiographs and noted extensive fusing of many vertebrae in the spine, a condition called spondylosis.  This certainly can cause pain, and I've seen those cases before.  The dog was placed on two analgesics and sent home for observation.  Unfortunately the pain didn't go away.  The owner thought it was in the neck and not the back.  Ironically, the only part of the spine that the other vet didn't get images of was the neck.  It was also puzzling because the pain wasn't consistent or repeatable.  When I examined the dog I manipulated the neck without any problems, resistance, or pain.

I've begun to appreciate modern technology in aiding a diagnosis, but not in the way many might think.  One of the keys to this case was the video the owner took with her digital camera.  Since the pain was sporadic and mainly happened at night, she took the video so a vet could see what was going on.  The dog's posture and actions certainly seemed to indicate neck pain.  But without symptoms in the clinic, this was puzzling.  Well, we knew a problem was in the neck, so we took x-rays of that area.

When I looked at the film my breath caught.  The problem was immediately obvious and was a serious one.  This is an image of the neck of a normal dog. 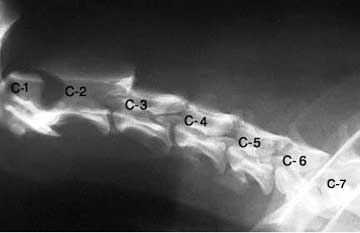 The first vertebrae (here labeled C-1) is the atlas and the second one (C-2) is the axis.  The atlas articulates with the skull and supports the head.  Most of the mobility of the head is going to come from the interactions of these two vertebrae with the skull.  In the center of the vertebrae is a hollow tunnel through which the spinal cord runs (labeled "sc" below).  In the above image the spinal cord would run where the letters and numbers are. 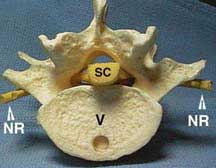 This dog had a severe dislocation of the atlas and axis.  Below is an image from the 'Net and not from this case, but my patient was very similar.

The scariest part of this is that this dog is a ticking time bomb.  At any time the dog's neck could shift more severely, immediately causing damage to the spinal cord.  This can cause paralysis from the neck down, but more importantly can cause problems with the heart and respiratory system since the nerves controlling these vital organs run through the neck.  I've seen a couple of cases like this and have always shuddered when I saw the radiographs because of the potential harm that could have happened during the exam.  When a patient has neck pain we will manipulate and bend the neck in all directions to see if we can isolate where the problem is.  Unfortunately in this case that manipulation can damage the spine.

Thankfully, this is a treatable problem.  Surgery can be performed to place pins or plates between the vertebrae once they are realigned, keeping them from moving out of place again.  Patients normally do well after this surgery and can lead normal lives afterwards.  This dog has an appointment with a surgical specialist and will hopefully have the procedure done soon before this particular bomb goes off.
Posted by Chris Bern, DVM at 10:51 PM