Most of the surgeries veterinarians perform are spays and neuters and are very routine.  But it's not uncommon to do more advanced and uncommon procedures.  Monday was one such surgery, as I removed a dog's eye, a surgery called "enucleation".

The dog is an old poodle who had a history of eye problems.  His left eye had been injured many years ago and was shrunken and useless.  His right eye had developed a cataract, so he was essentially blind.  Last week the right eye suddenly became worse and the eye protruded.  Apparently the globe (eyeball) had slightly popped out and the eyelids had slid behind it, trapping the eye in front of the lids.  Infection developed and this was extremely painful.  There was no saving the eye so the decision was made to remove it.

**WARNING!!!!!**  If you're squeamish don't scroll down through the rest of the blog.  I'm posting some pretty graphic images.


This is what the eye looked like just prior to surgery and after shaving and surgical prep.  He is already under anesthesia at this point. 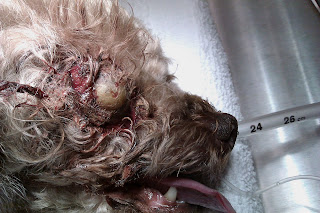 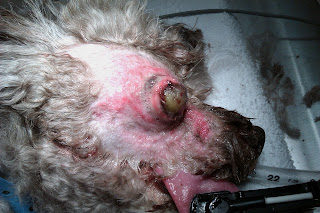 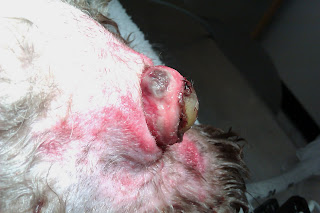 The cloudiness of the eye is a combination of cataract and pus.  The dog was completely blind, so the eye was only causing discomfort.  There was also severe damage to the eye so there wouldn't have been any benefit to putting it back into position.  The surgery is actually not very difficult and can be done by most general practitioners.  It's simply a matter of carefully cutting the muscles and connective tissues, gently freeing the globe from its attachments.  After cutting the optic nerve at the back of the eye, the globe comes out easily. 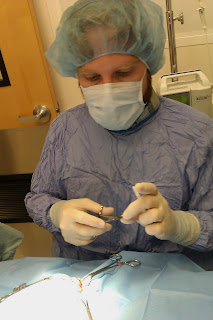 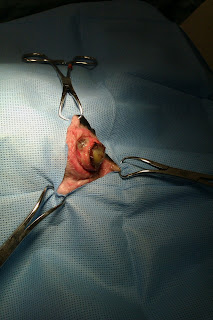 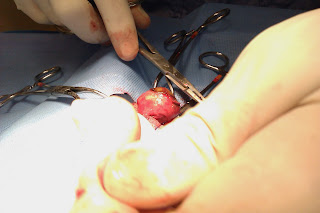 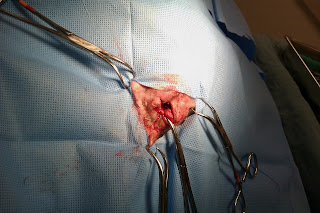 The last photo is of the empty socket after the globe has been removed.  The third eyelid and tear gland are removed and then the edges of the eyelid are cut away.  The eyelids are sutured closed so that the socket and tissues are protected.  In some cases a false eye is placed in the socket, but most vets don't do this and it is purely for appearances with no medical benefit.  Here's a picture of the patient after the surgery was finished. 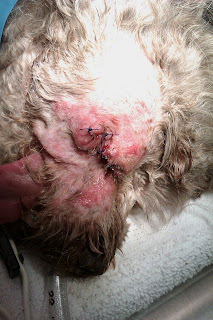 Dogs do quite well after the surgery and will go home with antibiotics and pain control.  Sutures will come out in 7-10 days and by then they are usually back to normal.  Since this kind of surgery is done because of severe damage to the eye, the dog is already blind prior to surgery, so removing the eye only improves their quality of life.
Posted by Chris Bern, DVM at 10:54 AM