This past weekend my family attended ConNooga, a multi-genre sci-fi/fantasy/animation/comic/etc. convention in Chattanooga, TN.  My wife was in charge of the ConNooga Kidz track, about 16 events that were geeky and kid-friendly.  As part of her job she managed to contact and arrange for a celebrity guest, one of the biggest ones the con has had....Ms. Debi Derryberry.

Now I'm sure that the name doesn't ring a bell to most of you.  But you certainly know her work.  She is a mostly a voice actress, though she has done commercials and live acting as well.  She's most well known as the voice of Jimmy Neutron, and more recently as Draculaura on Monster High.  But she's been in dozens of movies, TV shows, and video games, such as Final Fantasy, Crash Bandicoot, iCarly, and even Toy Story (she was the voice of the three-eyed aliens).  Since my wife arranged for her to come, we ended up being her hosts through the weekend, making sure she got to and from the airport, taking her to the store, and making sure she got to all of her panels.  In other words, we spent a lot of time with her.

Debi is simply a sweetheart!  She was very down-to-earth and fun to be around.  We had contacted her in large part because my daughter loves Monster High and Draculaura is one of her favorite characters.  So for the first day or so my little girl was star-struck and could do nothing more than grin and giggle.  Debi has a 10 year old son of her own, so she was comfortable being around our kids (and even enlisted my son to help pick out a gift to take back to her boy).  She also has a line of music CDs for children, and has focused a lot in this area.

Debi amazed me with not only her talent and overall "niceness", but how open she was to expand the experience.  My daughter's other favorite character is Clawdeen, the daughter of the werewolf. When we were out at the store, Debi called the actress who voices Clawdeen and got her on the phone just to talk to my daughter!  My little girl got to have a one-on-one conversation with her two favorite characters, speaking in the proper voices.  I don't think I've ever seen her grin so wide.  Then at the Monster High panel with many other kids, Debi managed to get in touch with another actress who voices three characters on the show, and had her talk to the audience in all three voices.  Additionally, she was texting with the show's producer, taking questions from the audience.

This was an amazing experience for my family, as we've never spent this much time with a celebrity.  I'm grateful to Debi for treating us so well, especially our children, and hope to meet up with her again in the future. 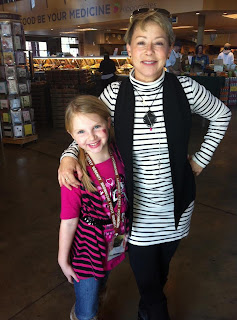