A Tumor Or An Alien?

My technology detox went well (though my son complained daily about being bored because he didn't have TV or video games), so it's back to blogging.

Today I wanted to share a case I had from a few months ago.  Really the case was pretty straight-forward, but the images are cool.  The dog had a mass on it's back that had been there for a year or two but had recently begun growing larger.  I've seen a lot of things in my career, but this one actually impressed me.

Fair warning...some of these images are graphic to the faint of heart, but certainly aren't the worse ones I've shown.  Proceed at your own risk.

These pictures are from the beginning of the surgical removal.  The dog is anesthetized and the area shaved and prepped for surgery.  Notice how long the dog's hair is.  Now imagine this ulcerative, oozing mass covered with matted hair!  Yep, that's what I saw on the initial exam. 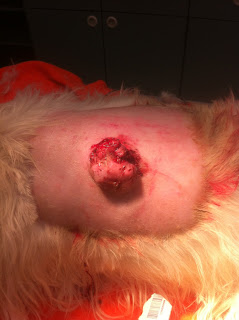 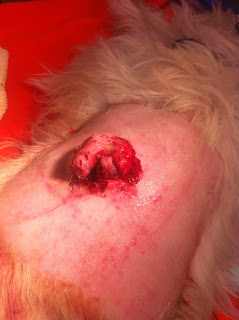 That's a pretty impressive mass.  I half-jokingly wondered if there was an alien somewhere in there, ready to pop out like the "chest burster" in the Alien movies.  Sadly, such was not the case.

The mass was pretty routine to remove, though there were a lot of large blood vessels going into it and I kept having problems with bleeders.  Nothing that vets don't face almost daily, though, and all vessels were easy to clamp and tie off.  As bloody as this may seem to some people, the actual loss to the patient is minimal and doesn't require a tranfusion. 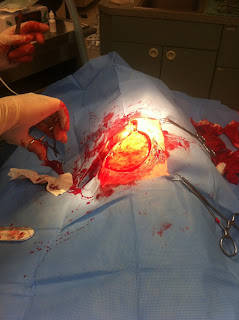 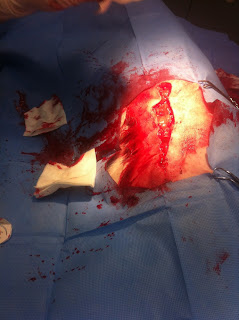 Many people aren't aware, but skin is constantly under slight tension.  When you cut through skin that tension is relieved, causing a gap.  When you remove part of the skin (including a tumor) the gap becomes even more prominent.  When you have a large mass and want to get 2cm margins around it (to make sure it's all removed) you can end up with a pretty large defect, and closing such a large wound can be challenging.  Thankfully, we are trained in doing so!  There are actually several neat tricks and techniques you can do to get the edges touching each other so that healing is faster.

And here are the "after" pictures!  A bit tight, but considering how much I had to remove I was very happy with the results. 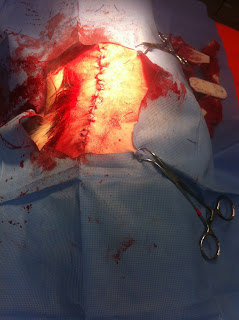 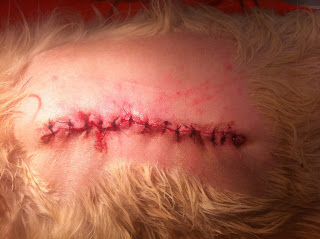 So what the heck was the tumor?  I'm glad you asked!  We sent it off for pathology and it came back as a hair follicle tumor.  It was benign, just locally aggressive, so the outcome was really good.  The patient did well and the incision completely healed.