I take out several bladder stones each year, and it's come to be a pretty routine and fun surgery for me.  I've posted about these before (here and here) and normally don't want to repeat myself.  However, this case was pretty remarkable and worth sharing.

Most stones that I remove are pretty small, no more than a centimeter or so in diameter.  You can see pictures of typical sizes of stones in the above links.  But this one was quite different.  The patient was a 100 pound Rottweiler that we started seeing this year.  Way back in February she was having bloody urine problems and we felt a possible mass in the abdomen.  Antibiotics resolved the issue then, but during exams for other issues over the last few months we kept noticing an abdominal mass.  The owners always declined doing x-rays.  Earlier this month she started having severely bloody urine and antibiotics didn't help this time.  I was convinced that she had a bladder stone and finally the owner agreed to radiographs.  Lo and behold, there was a large stone!  And thankfully they agreed to the surgery.

All of this is pretty typical.  But the size of the stone wasn't.  Here's a picture during surgery (don't worry, only a little gross). 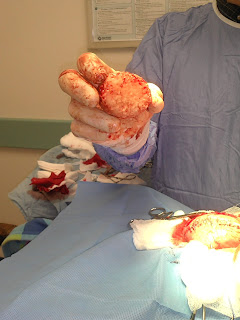 There was only one stone, and it was rather big.  The bladder wall was also extremely thickened and inflamed, much thicker than a normal bladder.  That wasn't too surprising considering that this stone has been sitting there rubbing against the inside of the bladder for at least 4-5 months.

Here's a better photo to appreciate the scale, with the stone cleaned up. 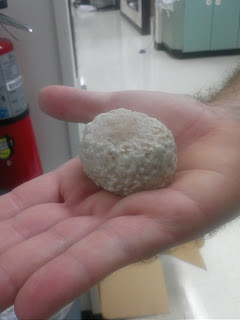 Yes, this came out of a dog's urinary bladder! Is it any wonder that she was having bloody urine?  And just for fun here's a picture of what it looked cut in half. 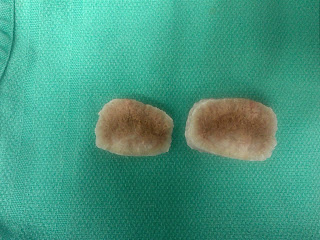 The analysis of the stone showed that it was mostly struvite, which is the most common stone type I see.

All of that is very interesting and this was a really big stone.  But it's actually not the largest one I've removed!  About nine or ten years ago I removed one from a dog that was flatter and had a larger diameter.  Instead of filling up most of my palm it covered my entire palm!  Unfortunately I took that out long before I had a digital camera so I don't have any pictures of it.  It was pretty amazing, though!  And to this day, that remains my record urinary stone.