Anyone who reads this blog long enough, or just looks at my favorite links, will quickly learn that I am a geek.  I have been reading comic books since I can remember reading anything at all, and have continued to keep up with current comic plots and lore.

One of my favorite characters is Hawkeye in Marvel Comics.  I've been following him since he was a secondary character in Iron Man and of course enjoyed his appearances in the Thor and Avengers movies.  Though he has made his appearance throughout Avengers titles and even some solo mini-series, it has been a long time since we've seen stories about him on his own.  So it was with great excitement that I picked up his brand new series.

What I didn't know until reading it was that a vet clinic plays a central role as a key location!  I was surprised and pleased to see that Clint (Hawkeye's real name) taking care of a dog that gets hurt during his battle with some gangsters.  However, as I read I started to see some flaws.  I hate to say it but that annoyed me a little, as I doubt the artist or writer talked to a vet before creating the issue.  Here are the pages I'm talking about. 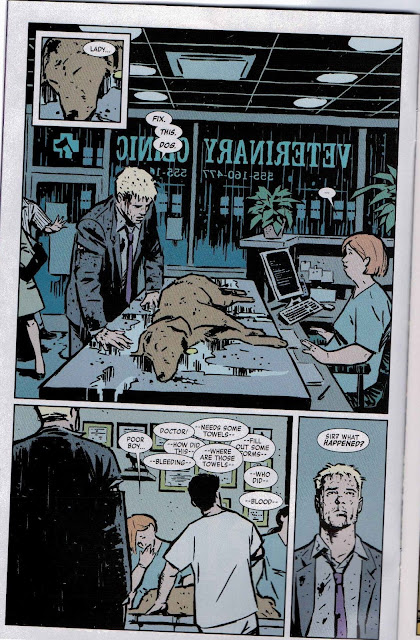 Doesn't look bad, does it?  But I have never seen a front desk that is large enough to put a full grown dog on it!  That kind of counter would be extremely difficult for any client to work on and reach across.  I've never seen a vet clinic that has anything other than standard width desks and counters.  Still, a nice little introduction. 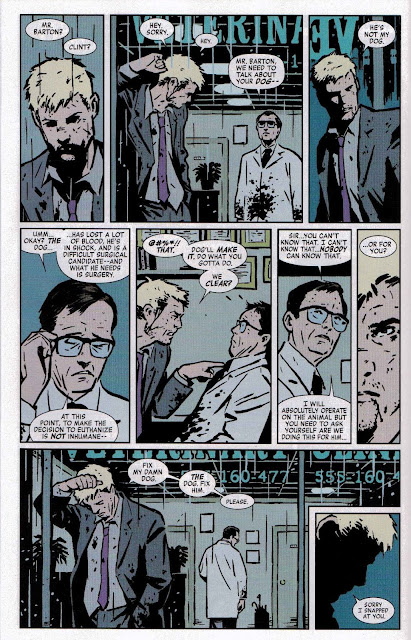 The good points here are how the vet talks to Clint.  I've had similar conversations myself and agree with the vet's approach to the case.  I also understand Hawkeye's stress and applaud the writers for having him apologize after the outburst.  The bad point?  Do you see how much blood he has on his lab coat?!?!  No matter the case I would NEVER walk into my lobby looking that bloody.  How hard is it to switch coats or just take it off?  There is always time to look professional, or at least not look like you stepped out of a butcher's shop, before talking to a client. 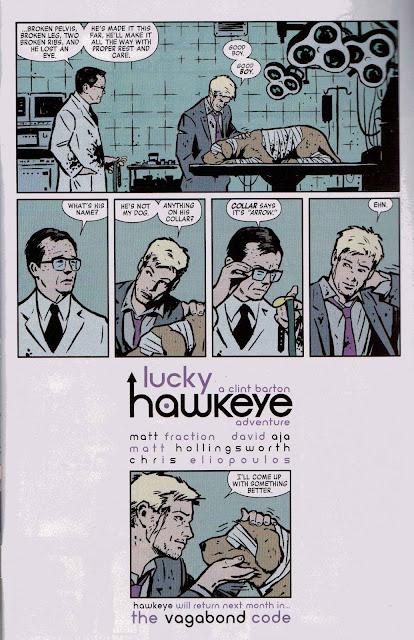 Yay, the vet saved the dog!  But he still has on that bloody, gory coat.  Really?  After surgery and recovery he is still wearing that coat?  In order to do surgery he would have had to take it off, so he willingly put it back on again!  I tell you, that stain is never coming out at this point.  And what's up with the care?  A broken pelvis, yet he's lying awake on a surgery table?  I can't see any signs of surgery on the pelvis, though perhaps it's on the right side where we can't see.  It could be the same situation with the broken leg, because those bandages aren't sufficient to stabilize such an injury.  Lastly, check out that eye patch and bandage.  Yes, that's how they do it on humans, but if we have to remove an eye we don't put any bandage on at all.  The lid will be sewn closed but the surgery area will be exposed.  The artist may have the basics of dog anatomy down, but he obviously didn't think out how the heck that bandage is supposed to go around the head.  Let me tell you from experience that such a bandage would be quite difficult as the anatomy of a dog's head doesn't really allow such a wrap.  In any case I can't think of any circumstance where I'd try to place something like this.

Over-critique?  Absolutely!  I should just be glad that they had a vet in there.  But when it's your profession that is portrayed it's hard not to see flaws in the details like this.  Still, I'll certainly continue to pick up this title.
Posted by Chris Bern, DVM at 11:00 PM