I enjoy surgery, especially soft tissue.  So when a dog came in with a large mass on his jaw my associate had me take a look to see if I could remove it.  The dog was a sweet, older lab mix, and the mass had started as what appeared to be an insect bite or small puncture.  It grew quickly and didn't respond to antibiotics, so the decision was made to remove it.  By this time the mass had gotten large and was tightly attached to the jaw.  After the exam I decided that I could probably take it off, but it was going to be tricky because there wasn't much loose skin.  This meant that I would have a challenge trying to close the wound I would make.

Here is the "before" picture.

As you can see, this was a really nasty mass that had eroded through the skin.  It was deep enough that I was worried about having to scrape the bone once I got in there.  For days before the surgery I kept running through my mind how I would put everything back together.  It was a daunting task, but I like a challenge and like this type of surgery.  I wasn't completely sure how it would go until I started cutting.

Here's some intraoperative pictures.  I got a new phone that I'm using to take pictures, and it made this look redder than it actually was.  However, this absolutely was a bloody surgery. 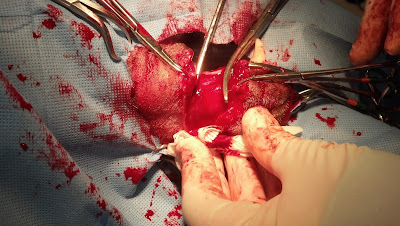 The mass went quite deep, but didn't quite reach the bone.  And you can see that there is a significant gap that I had to pull together.

That's where a bit of creativity comes in.  The skin doesn't stretch enough in this area to get the edges together.  So I cut the corner of the mouth and loosened the tissue so I could advance the skin forward.  To allow for a relatively normal ability to open the mouth I sutured the top of the incision backwards, preserving the anatomy pretty well.  Here is the post-operative appearance. 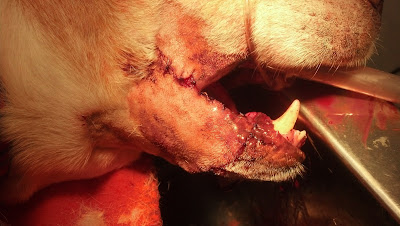 The dog recovered well and was doing well a the time of the suture removal ten days later.  Unfortunately the case doesn't have a happy ending.  The biopsy report came back as squamous cell carcinoma, an aggressive cancer.  It has a low risk of spreading in dogs, but still isn't a good thing.  A couple of weeks later he came back because he was having difficulty walking in his hind end and seemed possibly painful.  He was placed on pain medications and antiinfalmmatories, but this didn't improve his condition.  Less than a week after the medications he was unable to move his hind end or stand.  When I examined him he seemed to have neurological deficits related to his spine.  I suspected that either there was spread of the cancer to his spine, or a blood clot had lodged in his spinal cord.  Regardless of the cause it wasn't good, and the owner decided to euthanize him.

Even when a surgery goes well the case may not end happy.  Those are the ups and downs of being a veterinarian.