A Citizen Of Ladonia

There are some quirky things in this world, and I enjoy learning about most of them.  Recently I developed a passing interest in "micronations".  These are small countries or principalities not formally recognized by other nations.  For example, there is the Principality of Sealand, established on a tower platform off the coast of England.  And the Republic of Molossia, consisting of a house and yard in Nevada.  Some of these are created on a whim or as a joke, some exist for the purpose of parody or to prove a political point, and some are legitimate aspirants to nationhood.  Some of these micronations issue stamps, currency, and passports, though these are not recognized anywhere outside of that "country".  If you do a little research you'll be surprised at how many you'll find.

In researching the topic I came across the micronation of Ladonia.  One of the first things that intrigued me was that it was set in a nature preserve on the coast of Sweden, my father's home country.  Ladonia originated after a dispute between an artist, Lars Vilks, and the local council who objected to him erecting some driftwood sculptures in the preserve.  After they told him to dismantle them he created Ladonia in 1996 in protest.  For a complete timeline of important events see Ladonia's official website.

Ladonia has a Queen as well as an elected president and vice-president.  In fact, elections are soon to be held, something common in other constitutional monarchies.  There is a national anthem and an official flag:  a green Nordic cross on a green background. 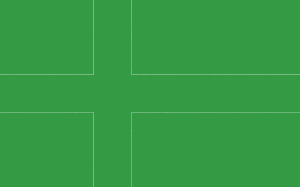 An interesting thing about Ladonia is that you can request citizenship and even pay to be nobility.  Not wanting to invest money but curious, I applied for and was granted citizenship.  State Secretary Vilks is in charge of such things and was able to process the request.  So now I have dual citizenship in the United States of America and Ladonia!

So the question is probably being asked...why????  You can't live there (it even says so on the Ladonian web site) and it's not an official nation, so why bother?

There is an interesting point being made about art versus municipal rules, which is what started the whole nation.  It has now spread to over 16,000 people in over 100 countries who claim Ladonian citizenship.  But more importantly (to me, at least) it's simply fun.  There may be a focus on the sculptures Vilks made and the freedom to be an artist, but to me that's not as important.  I get to be a part of a sort of social experiment, something that 30 years ago wouldn't have been possible.  I am able to interact with other Ladonians around the world through the nation's Facebook group, and even participate in elections.  There is a sort of odd joy in the fantasy of a new country populated from every part of the globe.  Yes, it's a bit silly (the current elected president is an old pair of shoes living in Sweden and the national anthem is the sound of a stone being thrown into water), but without a little fun in life things get rather boring.

So here's to Ladonia!