Last week my father lost one of his best friends.  Tucker was originally my dog, having adopted him about 12 years ago.  He was being fostered by one of my staff and I fell in love with him.  I don't typically like chihuahuas, but he was not like others of the breed.  He was friendly, sweet, and patient, and seemed to love everyone.  He was a great part of our life and was there when both of our children were born.  About eight years ago my parents were watching our dogs while we were on vacation at the beach.  My mother, who had been fighting cancer, fell and broke her pelvis, ending up in the hospital.  A short time after that she passed away.  My parents had been married almost 40 years, so that left a big emptiness in my father's heart and home.  During that sorrowful time Tucker was a blessing to him, giving him unconditional love and attention.  After some discussion, my wife and I decided to let my father keep him.

For the last several years he has been my father's constant companion, going with him almost everywhere.  Everybody who met him loved him.  A few years ago he developed a mild heart murmur that had worsened in the last year.  More recently he had been placed on medication but took a turn for the worse last week.  My father took him to his vet (we live in different states) who gave Tucker great care.  Unfortunately it may have been a little too late, as he passed away from heart failure late that night.

My father is 81 and lives by himself.  He's still quite capable of fending for himself, but the house is now very lonely.  For the first time in at least almost 50 years my father is the only one in the home.  No people or pets are there to greet him when he comes in.  He told me that he'll get another friend eventually, but the loss of Tucker is still hard.

A neighbor and friend sent him this poem, which he shared with me.  This is for Tucker, and for everyone else who has lost their best friend.

For Tucker
There is a pretty place up in the sky,
Where special dogs go when they die.
A place to stay and wait all day
Until their master comes their way.

For some the wait is short and sweet,
For others time drags on leaded feet.
Row upon row by heaven’s gate
The noble, furried creatures wait.

For a certain footstep that they know,
For a certain voice to say, “Let’s go.”
And so you left us on this day
For a place of no pain, to run, to play.

But keep your eyes upon the gate,
I’ll try not to be too late.
I’ll softly call your name and then,
Together, life will be good again. 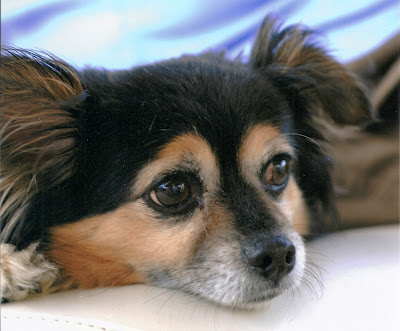