My daughter is a rather unique little girl.  She's 10 years old, but isn't typical for a girl her age.  Yes, she likes My Little Pony, anything colored pink, shoes and clothes, and lots of sparkles.  She's silly and cute and for all the world often seems like the little princess. 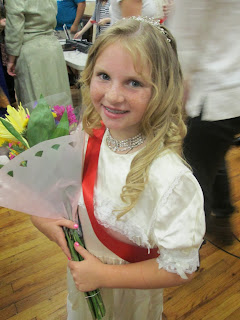 But she also has a rather creepy, darker side.  Over the years she has shown a growing interest in monsters, zombies, and other things that go bump in the night.  This year we began watching episodes of The Walking Dead together, and she loves the show.  She's really into the Monster High line of dolls and Vamplets stuffed creatures.  She has a pet rat and loves snakes, spiders, and other creepy-crawlies.  Nothing seems to phase her, including monstrous costumes we see at Dragon*Con every year.  So we decided to really put her to the test.

Near Atlanta is one of the country's biggest and scariest haunted attractions, Netherworld.  Each year it ranks in the top haunted houses in America, and has amazing special effects, animatronics, and Hollywood quality makeup.  Adults will run screaming in fear through this attraction.  I've always kind of liked haunted houses and have been eager to visit it, but had never been able to.  For the last year I've worked on my daughter, eventually convincing her to try it.  We did a minor haunted house last year and she wasn't scared or impressed.  So I thought that surely Netherworld would make her tremble. 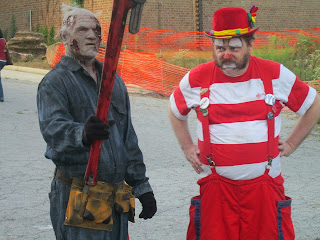 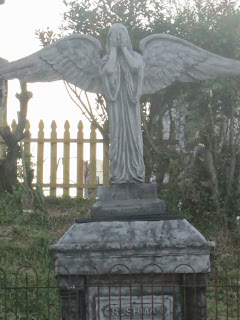 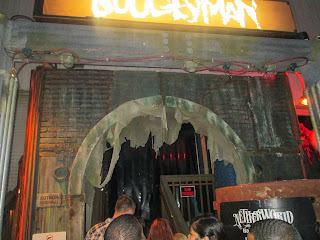 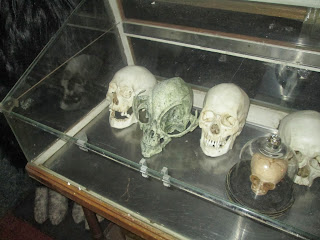 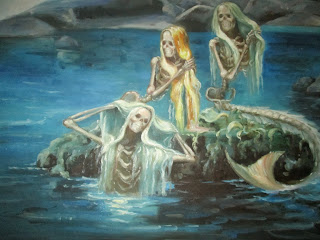 There was no fear in her as we drove to the attraction, and when she saw some of the actors in costume she became more excited.  She had already thought it through, planning on dressing in her cutest pink outfit so that the monsters would expect her to be frightened. 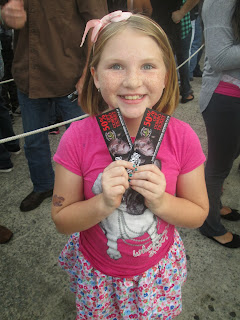 Does that look like someone worried about seeing some of the best that American haunts have to offer?  Yeah, that's what I thought.

None of the characters outside bothered her at all.  Two of the creepiest actually were her favorites and she deliberately went to talk to them when she saw them from a distance. 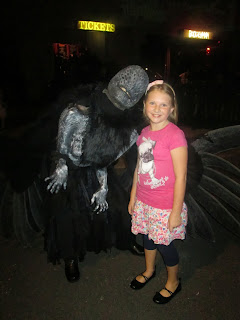 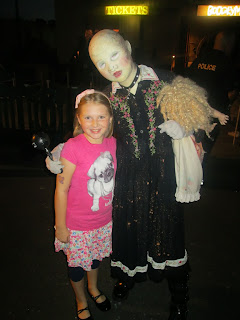 So we went into the two sections of Netherworld.  One was smaller ad dealt with the Bogeyman and primal fears.  The other was a pretty standard haunted house with mirror mazes, monsters, dead bodies, and plenty of people jumping out to scare us.  Yes, there were moments that she and I were startled, but at no point were we really scared.  I think she threw most of them for a loop because when they came out at her she would just give her brightest, cheeriest smile, wave, and say "Hi!"  One of them leaned over her with claws bared and a menacing growl, twisting his head back and forth in an effort to intimidate her.  She just calmly looked up at him and twisted her head to mirror his motions.

I really think she surprised the actors, all of whom are used to teens and adults screaming and running in fear.  But then this cute, petite blonde comes through, bedecked in pink, and they can't make her jump.  After failing to frighten her, some of the characters would give her a high-five or fist-bump, impressed by her bravery.  One of them told her that she was braver that most of the adults that came through.  Netherworld had someone going through taking videos, and he followed us for a short distance.  At one point he came closer to me and commented that he couldn't believe how brave and unfazed she was.

By the end I realized that she simply couldn't be scared.  In fact, she was fully in her element!  She kept talking about wanting to work there and was describing how she was planning on creeping up to people and scaring them.  In fact, she became "pinky buddies" with the troll! 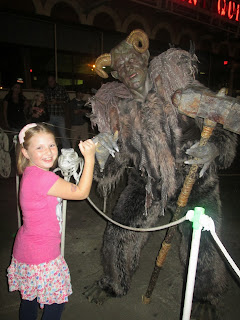 I can imagine that some of the actors may have gotten together after it shut down for the night and started talking about how things went, especially since this was opening night for this year......

"Okay, good first night, everyone.  Let's talk about how things went.  Anyone have anything strange to report?"

"Um, yeah.  There was this little blonde girl in pink.  I'm not sure what happened, but I jumped out and growled, and she just smiled and said 'Hi'!"

"Dude, yeah, I saw her too!  My best growl and howl and it didn't phase her!  She just grinned and waved.  Maybe I'm losing my touch."

"Okay, so how many of you saw her come through?"

"And how many of you were able to scare her?"

While my daughter is not typical in any sense of the word, I'm proud of her.  She exudes self-confidence and revels in her weirdness.  She has figured out her own style and way of being, and doesn't want to march to the beat of anyone else's drum.  That's hard to come by in this world, and I really hope that she continues to defy convention and peer pressure to become her own person.

And yes, we'll be going back to Netherworld again next year. 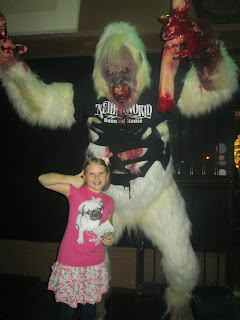