One of my long-term clients brought their dog to me for a broken leg after being hit by a car.  She had let the dog, an older poodle, outside when the dog wandered too far and got into the road.  A car hit her but didn't stop.  The dog was limping and the leg had an obvious break, so she brought her in.
On the initial exam the dog was breathing heavy but was alert and stable.  There was a bad fracture in the middle of the left tibia, something that I could tell just on palpation.  Surprisingly there didn't seem to be any worse injuries and I was hoping that it was just a broken leg.  In order to assess the damage and see what would be needed for treatment we took some x-rays.

Here's the leg.  This is a bad fracture, but not irreparable.  A splint/cast alone probably wouldn't stabilize the bone well enough, but a pin or plate would result in a very good chance of healing and normal use for the rest of her life. 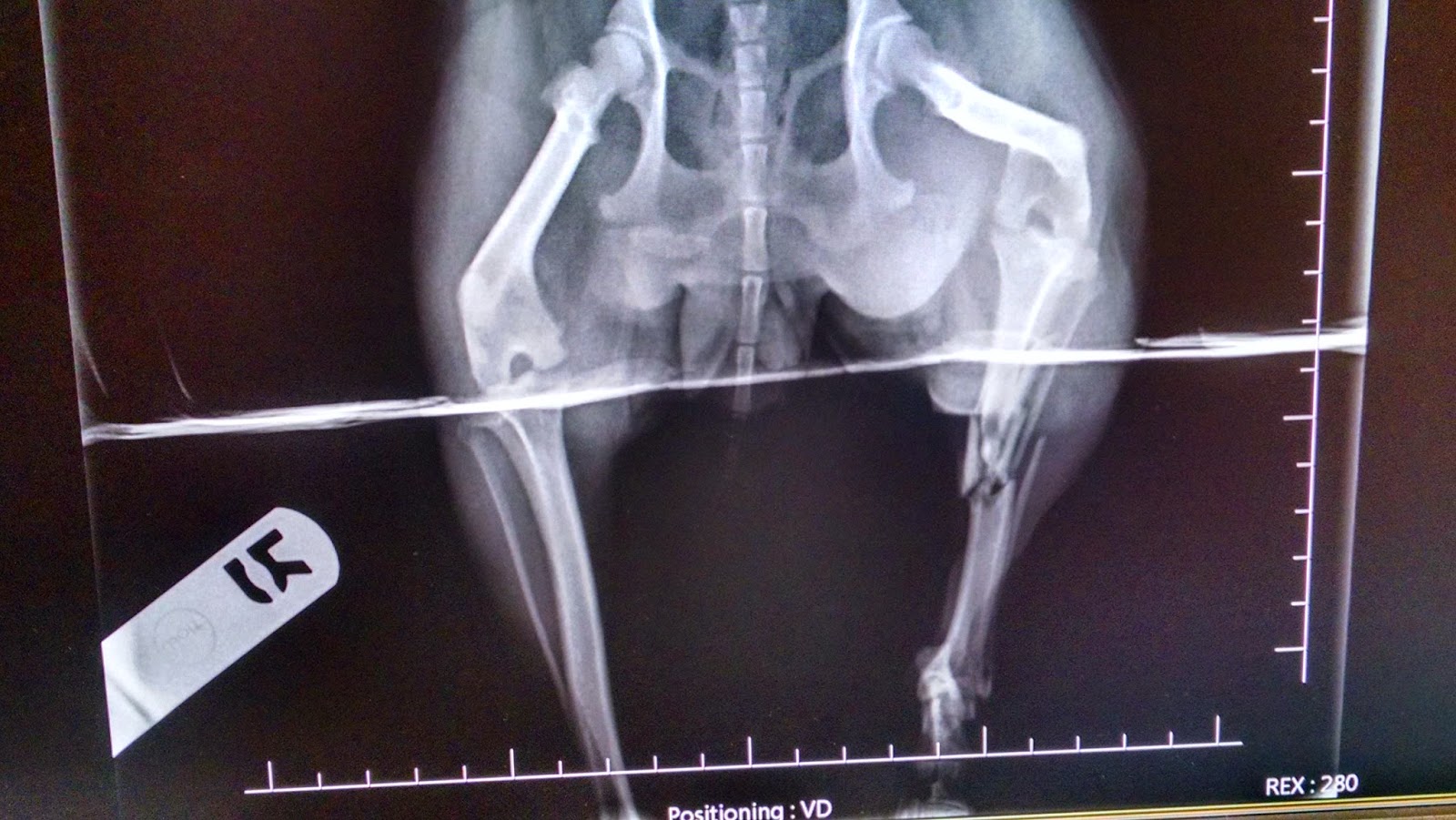 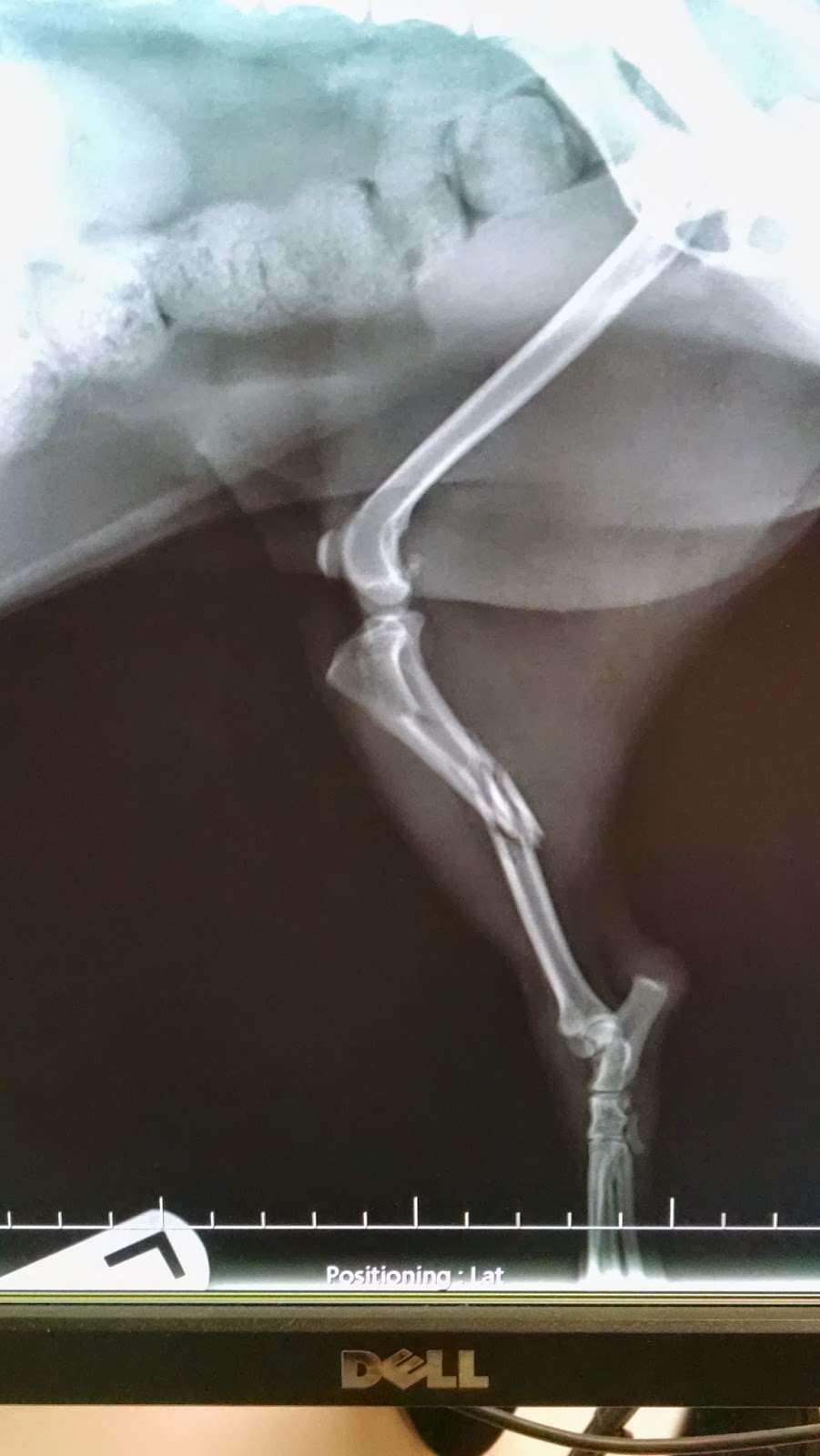 This is the point where instinct and training take over.  With just the exam I could tell that the leg was broken and there weren't obvious injuries otherwise.  So it would make sense to take radiographs of the legs.  However, a thorough doctor will be aware of other possibilities.  And just to be on the safe side I took some views of the chest. 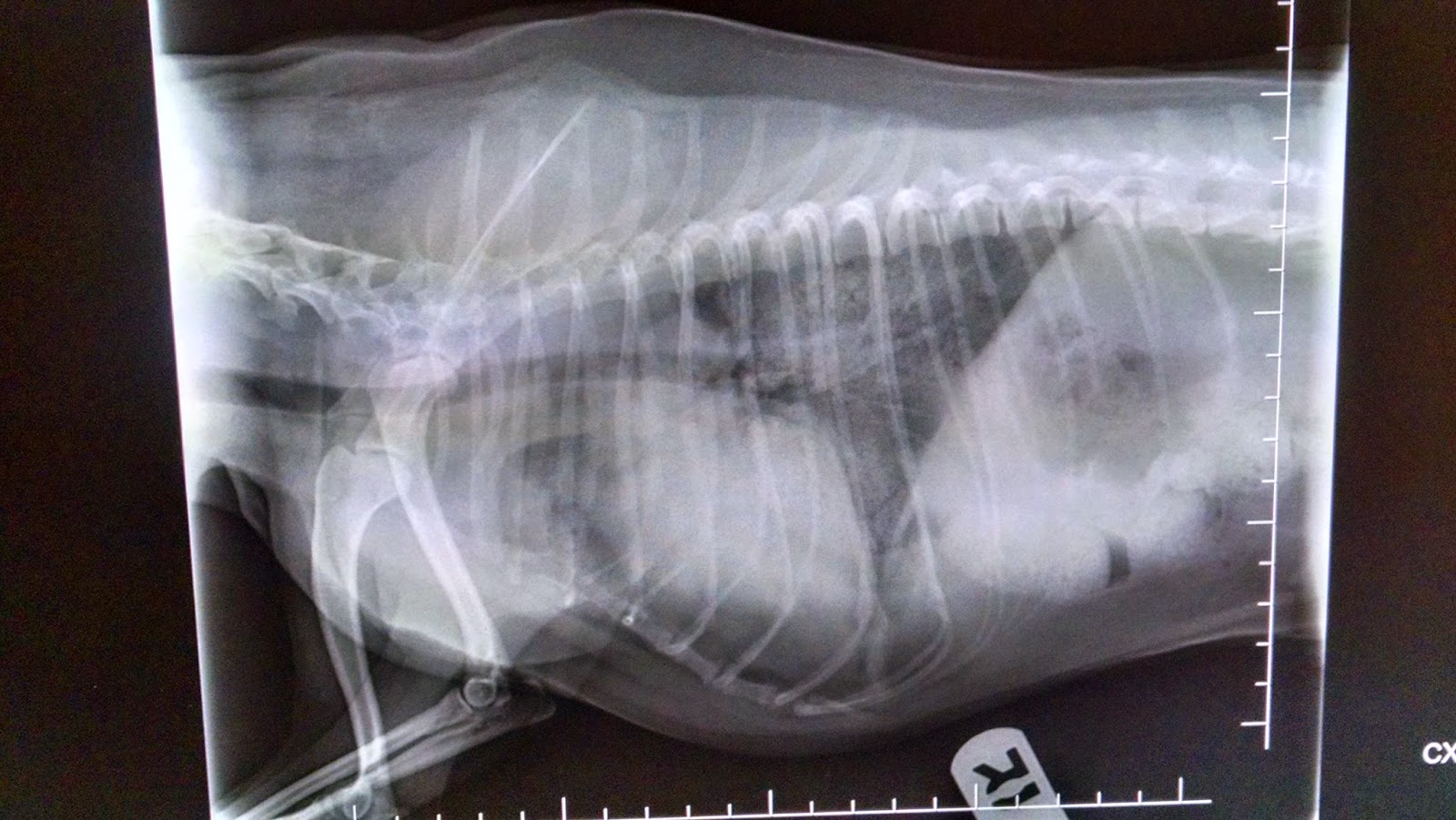 Notice the haziness in the area of the lungs between the heart and the spine.  This should be much more black, representing the air in the lungs.  Also look below the stomach in the abdomen.  You'll see some hazy, mottled objects running along the direction of the body.  These are feces in the colon and they should not be in that location.  At this point I knew what had happened, but I took the last view. 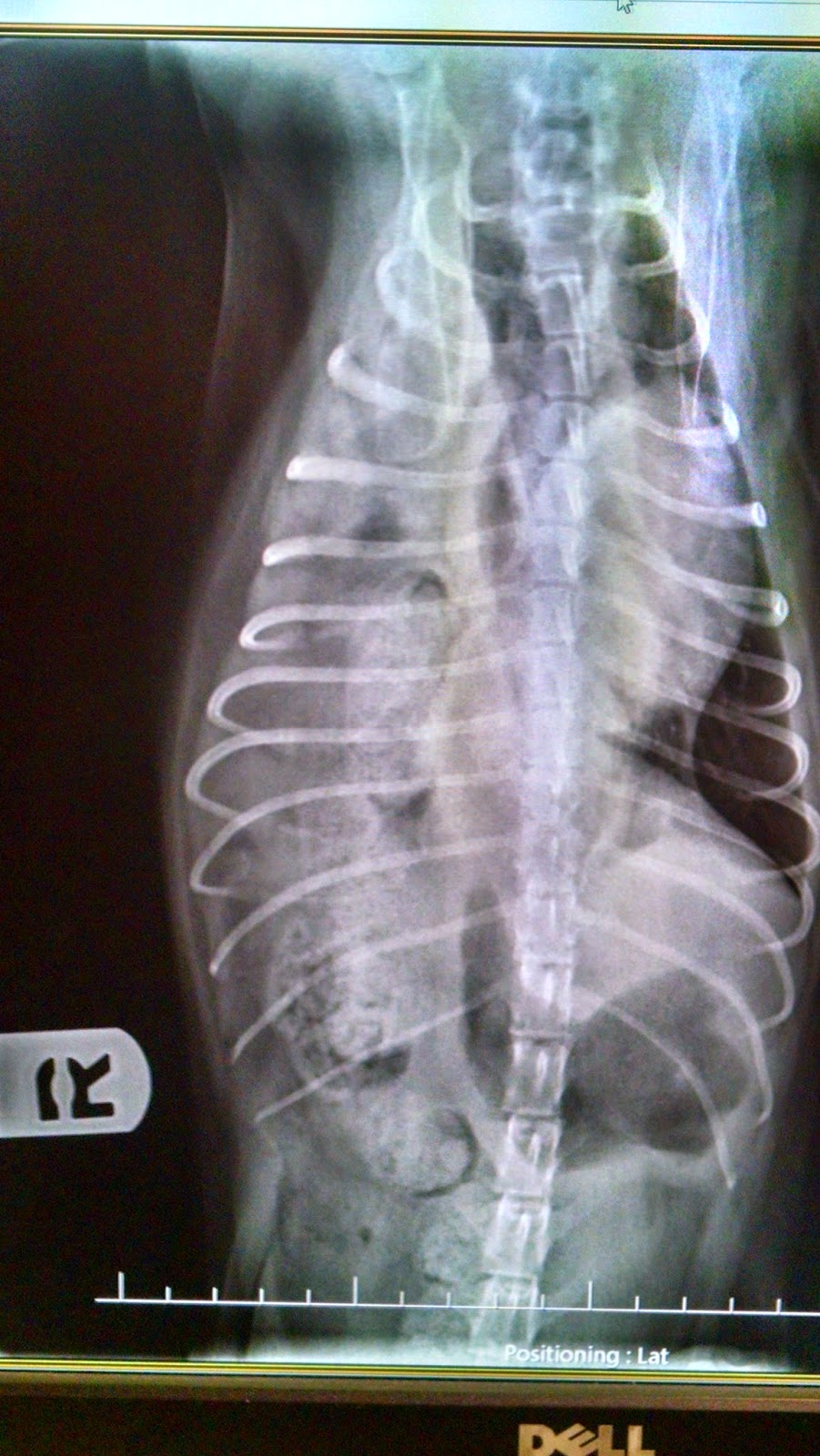 Even if you know nothing about reading x-rays, I'm sure you can tell that the right side of the chest is just "off".  What's going on?  Those are abdominal contents in the right half of the chest.  Feces within the colon show how that part of the intestines is now within the space normally occupied by the right lung lobes.  Notice the air-filled (blacker) object on the right-hand side of the image at the last ribs?  That's the stomach.  Follow it to the right side of the body and you'll see a finger-like projection pointing "up" into the chest.  This is not normal, and represents the pyloric region of the stomach, which should empty into the upper small intestine. That part of the stomach is now going into the chest.  And lastly, look at that oval whiteish object in the center-left of the chest.  That's the heart, and it's being pushed from the center until it is touching the left wall of the thorax.

This is a diaphragmatic hernia, and was the reason I decided to view the chest.  When there is a hard, sudden impact against the body, the force can push the air and organs against the diaphragm, causing it to "pop" like a balloon. The diaphragm is a muscle, so this results in a tear and hole in the structure.  The inside of the chest has negative pressure in order for the lungs to be able to inflate without pressure around them.  That small vacuum helps to suck abdominal contents into the chest.  Once the diaphragm ruptures it's pretty simple for liver, stomach, and intestines to move through that hole.

A diaphgramatic hernia is much more serious than a broken leg.  This dog had difficulty breathing because at least half of its normal air space was taken up by abdominal organs.  It should be obvious that she couldn't live well this way.  That being said, I've known cases where a hernia of the diaphragm goes unnoticed for a long time because the dog compensates for its breathing.  This is not an ideal situation, so surgery is always strongly recommended.

I've done this surgery, but it's a very risky one.  It involves opening the abdomen pulling everything back into the proper place.  This allows the thorax to have exposure to outside air, collapsing the lungs.  You have to forcably breathe for the patient and remove excess air from the chest afterwards.  Depending on the size of the herniation it can be difficult to pull the liver back into the abdomen.  There is also a very important nerve along the diaphragm that can be damaged, resulting in paralysis of the breathing muscles.  The surgery carries a lot of significant risks, but not doing it is even riskier.
In this case the owner didn't have good options.  She simply didn't have the money or credit to do any kind of surgery, let alone the thousands of dollars it would have cost to repair the diaphragm and leg.  This little girl ended up being euthanized so that she wouldn't suffer.

Not all traumatic injuries are obvious on first glance.  A broken leg is bad enough but it's not a life-threatening injury.  Please be careful with your pets.
Posted by Chris Bern, DVM at 4:08 PM