The Best Star Wars Toy Ever?

Anyone who reads this blog for long will quickly realize what a geek I am.  And I wave my geek flag proudly!  One of my favorite fandoms is Star Wars.  I've never really gotten into the "extended universe" novels and comics that became popular over the years, but that's not a bad thing for me since the new Star Wars movies and tie-ins are pretty much ignoring that in favor of a new canon.  But I've see the movies more times than I can remember, and have bought every version on VHS and DVD.  I remember seeing the original Star Wars movie in theaters in the '70s, and ended up watching it three times, something pretty much unheard of at that time.  I've seen every new Star Wars movie in the theaters since then, including any re-releases.  I had countless Star Wars action figures, and a Millenium Falcon, Snow Speeder, and Slave 1 to go along with them.
So of course I'm really excited about Star Wars Episode VII: The Force Awakens being released in a few months.  I've watched every teaser and trailer that's been put out so far, and am especially happy about the fact that they have most of the original actors returning to reprise their roles of Luke, Han, Leia, and Chewie.  For someone of my generation, this brings back some of the best memories of our childhoods, and really taps into some of our happiest moments.  How can one of us watch a trailer like these and not get excited? 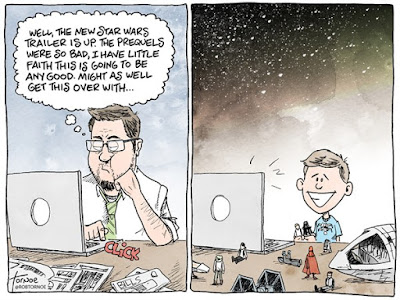 On September 4th there was a huge marketing push called "Force Friday" where all of the new product tie-ins for the upcoming movie were released on the same day.  Yes, I went by the local stores and got to see some of the new merchandise in person, and yes, I was drooling over them quite heavily.  I already have a good bit of memorabilia in my home and my son has all of my old Star Wars action figures, but I can see myself getting some of these toys in the upcoming months.

There was a standout star, however.  The new droid, BB-8, has been making the headlines among Star Wars fans, in large part because he is a real effect like R2-D2 and not just a practical effect.  I have a feeling that he'll come to become as popular as R2 has been, at least if his personality is as strong.  I would have loved to have been there when the movie makers proved to the fans that they had build a working droid that rolls like that!

On Force Friday it was revealed that a company had made a real, working replica of BB-8 as a toy.  And it looks amazing!  I've been reading some of the online reviews, and this looks to be a big leap forward in toy robot technology.  Plus, he is so cute!

Even though it has a $150 price tag, I really want this toy.  And my kids do too, so I'm thinking about this as a joint Christmas gift to each other.  That is, if we can find it!  Apparently this toy has been the hottest thing on the market and everyone has sold out almost immediately after it went on sale.  The prediction is that this will be THE toy of the holiday season, and I can see why.