He's Neutered, So Why Is My Dog's Penis Swollen?

Many times over my career I've had clients come in with their neutered dog, worried because they thought he still had testicles.  Or they may have thought that there was a tumor growing.  Thankfully most of the time this is a simple issue because people don't know canine anatomy.

Dogs have a structure at the base of the penis called the bulbus glandis.  This is a knot of tissue that surrounds the penis and becomes enlarged during erection.  In intact (un-neutered) males this is the "knot" that locks them into a female during intercourse. 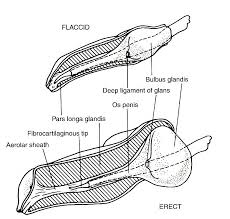 So why does this structure enlarge in a neutered dog?

Growth of the bulbus glandis does not happen in a neutered male due to sexual activity.  With a lack of significant testosterone levels they don't feel sexual attraction or excitement.  However, "excitement" can be due to non-sexual reasons.  When a male dog gets happy and excited due to play, the bulbus glandis can become swollen.  Typically when I see this it's in a very energetic, happy-go-lucky young dog that loves attention and play.  Having this happen is normal and nothing to worry about.

The key to recognizing the bulbus glandis is that it comes and goes.  When your dog is resting or asleep it shouldn't be enlarged.  If the swelling is persistent under any circumstances, or if you're simply not sure what it is, have your vet take a look.
Posted by Chris Bern, DVM at 6:38 PM