In my last post I talked about when waiting to do surgery is sometimes in the best interest of the patient.  However, that's certainly not always the case.  As a contrast, I want to talk about another real-world case where the opposite situation occurred.
The patient was a five month old mixed breed dog.  She came in for vomiting, not eating, and seeing some cloth in the feces.  The clients were limited on funds and couldn't do much on the first visit, so one of my associates gave her some symptomatic treatment for an irritated digestive tract but told them that they needed to watch her closely.  Two days later she wasn't any better and came back.  This time the client allowed us to do x-rays.  There was certainly something unusual in the abdomen, though we couldn't identify exactly what it was.  In the cranial (front part) abdomen there was  an unusual pattern on the x-ray, which made us suspicious.  We really thought that we needed to do an exploratory surgery, but the owner didn't think they could do that.  We ended up having to send her home again to let the owners discuss the situation.
Thankfully they came up with the funds and the next day I did surgery on her.  Once I got into her abdomen I quickly saw three parts of the small intestine that were folded in on themselves, (called an "intussusception".
[Sorry that I don't have any photos for this case, but my phone was messing up and wouldn't save any pictures.  I ended up having to replace the phone.] 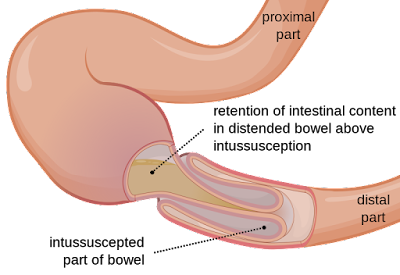 Source: http://1.bp.blogspot.com/-YVe66VJZetE/UxO-R2TXWwI/AAAAAAAAAEs/iQZ5AX4ozw4/s1600/Intussusception_EN.svg.png
This is a very, very bad condition.  If it goes on long enough intussuscepted part of the bowel can lose blood supply and start to die.  The back-up of intestinal contents quickly becomes worse and stretches the bowel.  So when I saw three of these areas my heart skipped a few beats.
As I explored more I saw that these areas of intestine were inflamed, but still had a good blood supply.  Our first big break!  As I inspected the intestine I felt something firm and long inside, what we call a linear foreign body.  These are dangerous kinds of foreign objects, and are typically something long and thin such as string, rope, etc.  The object itself doesn't pass through easily, and as the normal contractions of the intestine (peristalsis) moves along it the intestine starts to bunch up.  Imagine a thread through the pleats in a curtain.  When you pull on the string to open the curtain, the curtain bunches up and folds.  This also happens to the intestine.
I found a picture from another site that shows a different vet with a similar case.  Notice the smooth, flat part of the intestine on the lower left of the picture.  That's the normal section.  The top and right of the image are bunched up, which is due to the linear foreign body.  In my own case this resulted in a full inversion of the intestine. Source: http://farm7.staticflickr.com/6218/6359321375_606e0ccdaa_z.jpg
As I continued to explore I saw that there was a very long section of intestine that was affected and which contained the foreign object.  I finally found a larger ball of material at the far end, which indicated the extent of the problem.  From that point I was able to make a small incision in the intestine and slowly removed the object.  Our second big break was that I was able to slowly work this very long material out of a single incision.  Sometimes we have to cut the object into small pieces and make several small incisions in the intestine, but in this case I was able to work with only one area, which significantly lowers the risk of complications.
The rest of the surgery went well and was uneventful.  Once the object was removed the intestines quickly started returning to a normal appearance and the swelling started to decrease slightly.  After closing her up and ensuring she was recovering well I examined what I had removed.  This is where I wish I still had those photos!  The foreign object was a strip of women's underwear about 18 inches (45cm) long!  As it was chewed it unraveled and turned into a long strip, which then caused the obstruction.
The clients and the patient were very, very lucky.  This was a case where we did NOT want to wait on surgery to see if the object would pass.  We were already in a risky situation because the surgery was delayed by several days.  I don't really fault the client, as they weren't financially prepared to handle that kind of crisis, and thankfully were able to come up with the money.  If they had waited a few more days we may have had permanent damage to the intestines resulting in a perforation of the bowel, or the need to remove a large section of intestine (a much more expensive and risky procedure).  Doing the surgery right away was necessary to save the dog's life.
These two cases show some of the challenges of being a vet.  When do we decide to postpone a surgery?  When do we jump in immediately?  What is best for the pet?  Sometimes it's not always clear-cut, and I've had situations where we did an exploratory but found nothing, as well as situations where a dog died because the owners postponed surgery.  Sometimes we can get a better idea with ultrasound as well as x-rays, but most vets don't have an ultrasound machine.  In the end it comes down to a risk assessment based on the clinical presentation, lab tests, and to some degree the vet's experience and instincts.
Posted by Chris Bern, DVM at 5:24 PM