It's a great line from one of my all-time favorite movies...

Dr. Peter Venkman: Or you can accept the fact that this city is headed for a disaster of biblical proportions.
Mayor: What do you mean, "biblical"?
Dr. Raymond Stantz: What he means is Old Testament, Mr. Mayor, real wrath-of-God type stuff. Fire and brimstone coming down from the sky! Rivers and seas boiling!
Dr. Egon Spengler: Forty years of darkness! Earthquakes, volcanoes...
Winston Zeddmore: The dead rising from the grave!
Dr. Peter Venkman: Human sacrifice. Dogs and cats living together. Mass hysteria!

The implication is that the idea of dogs and cats living in harmony is pretty ridiculous and isn't likely to happen under normal circumstances.  However, many of us know better.  And obviously the writers of Ghostbusters never visited a home like mine.  I have three cats and two dogs, for the most part living together well.  But one of the closest bonds is between one of my cats, Ash, and my oldest dog, Guinevere.

Guinevere has always been a very sweet girl, and is friendly towards pretty much any person or other animal.  She loves getting to know new pets, and is very low-key for a Labrador retriever.  When we first brought Ash home a couple of years ago she was curious but willing to let the newcomer be.  Ash was a bit freaked out by this big yellow dog, and would hiss at her for the first few days in our home.  But he quickly became used to her, and somehow they became friends.  That bond continues to this day, when we will see them laying together and see Ash grooming his big doggie friend.  It's really heartwarming to see how closely these individuals from traditionally antagonistic species have bonded. 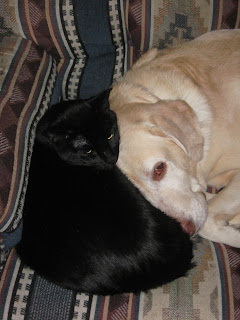