I've seen a lot of bad things in my 30+ years in veterinary medicine.  Plenty of neglect, some malpractice, carelessness, stupidity, and lots of things that aren't the fault of an owner.  I've become used to handling situations like these, and even perhaps a little jaded from so many years of seeing them.  We've come a long way in pet care just in my lifetime, let alone within the last century, so it somewhat surprises me when I see people still doing things that were a bad idea 50 years ago.

Recently a client brought in their brand new puppy.  They had picked her up just a few hours before and noticed that something wasn't normal with the tail.  They were told by the breeder that they had "docked" the tail themselves.

Let me pause for a moment to describe exactly what tail docking is.  Typically this is done in certain breeds when a dog is three to five days old.  There is no medical benefit for doing so, and it's only because people have come to expect a breed to look a certain way.  If done appropriately a vet will see the puppy, do a surgical scrub to disinfect the tail, and then use a sharp scalpel blade to cut through the skin and muscle and between the bones in the tail.  This hurts very briefly and there is minimal bleeding.  Either some surgical skin glue/adhesive or a quick stich are used to close the wound, and the puppy is put back with the mother.  The procedure takes no more than a minute or two in skilled hands, and within a few minutes afterwards the puppy is acting normal.

But there are older "country" or "redneck" ways to dock a tail.  The most common is to tie a rubber band tightly around the tail at the desired level and just leave it there.  The idea is that blood flow stops and the end of the tail past the band simply falls off.

Let's evaluate this method for a bit.  First, it's often done on older puppies who have thicker tails with more tissue.  The larger tail makes it more difficult to achieve the desired results.  But even so, stop and think for a minute.  Doing this is exactly the same as if you tied a rubber band around your pinkie finger and it eventually fell off.  How long would this take?  How much would it hurt?  How much risk of infection would there be?  I don't think any sensible, rational person would ever think that amputating a finger should be done with a rubber band.

The band constricts blood flow.  Without blood supply the tissues die.  With enough time they will deteriorate and fall off.  But the nerves aren't initially damaged so it will hurt quite a bit.  It's not natural for tissues to die in that amount, and restricted blood flow is not healthy.  You are not getting closure of the skin so a combination of dead/dying tissue and open wounds results in a high risk of infection.  If the tail is particularly thick you may not even get complete destruction of all tissue, leaving some muscle and the bone while the skin falls off.

Can you see how cruel and ridiculous this is?

Now back to the puppy.  And as I'm sure you can guess, what I described above is what happened.  She was about six or seven weeks old and when I saw her this is what the tail looked like. 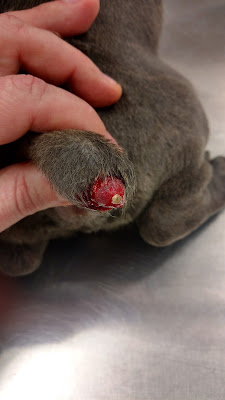 That white tip on the end?  That's bone sticking out.  And the whole thing looked worse than how it appears in the picture.

Immediately upon seeing it I knew what had happened, and this was confirmed when I found this elastic band around the base where the viable skin stopped. 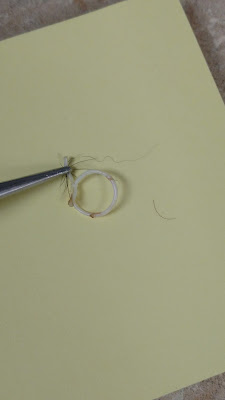 I'm a very even-tempered, good-natured person, and it really takes a lot for me to get angry or lose my temper.  When I do get upset, I tend to get very quiet and stern.  One of my techs noticed this as I was describing to some of the staff what I was seeing and what had happened.  She said "Uh, oh.  Dr. Bern is quiet.  He has his mad face on."  And she was right.  I was royally ticked off at the breeder for having done this, and was working on how to remain professional yet honest when I told the new owners what was going on.  In fact, I can't remember the last time I was that pi**ed off at work, especially over a client situation.  My staff has rarely ever seen me get like that so they knew something big was going on.

The puppy had been left with us for a little while so when the owners came back I went into the room with them.  They confirmed that the breeder had told them that they had been the ones to "dock" the tail, and the clients knew something wasn't right when they saw it, which is why they brought the puppy to me.  I started to explain to them exactly what had happened and showed them the elastic band.  I was polite but very firm and blunt.  I could see the husband's face becoming like mine had been just a few minutes before, and the wife looked ready to cry.  He had suspected something like this but couldn't believe that anyone could actually do it.  I told them that I had heard many times of this being done, but this was the first time I had seen it in person.

Then I had to drop the other shoe.  A problem like that won't heal with just antibiotics and a bandage (if a bandage will even stay on a tail like that, which it likely won't).  She is going to need to have the tip of the tail surgically amputated and the skin closed over it.  We really can't save the tail tip and if surgery isn't done soon she risks worse infection.  So not only had they spent money to purchase this dog, but they were now going to have to spend $600-800 or more to have the tail fixed.  All because some dip-wad jerk thought they could shorten a tail by cutting off the blood supply with a rubber band.

This upset them even more, but not at me.  And I could tell that they honestly felt bad about what happened and that it wasn't their fault.  The husband said that he thought she might need surgery so while my comments bothered him they didn't surprise him.

The three of us shared several moments of being furious over what the breeder did to this poor puppy.  They were in a tough situation because they had only had her for a few hours and were now faced with expensive surgery.  At the same time they couldn't bring themselves to take her back because of fear of what would happen to her then.  So they made the decision to keep her and fix the tail.  I was really impressed with their commitment and compassion for this little pup.

Part of our discussion was around the cruelty of this breeder.  And I'll be very, very blunt.  I consider this animal cruelty without any doubt.  I don't see how any reasonable, compassionate person could think otherwise.  If anyone reading this is one of the breeders who does such things, I would say the same thing to your face.  This is inexcusable, intolerable, and unnecessary.  That puppy was put through pain and developed an infection because a human wanted their tail to look a certain way and took it upon themselves do try and cause physical change in a way that would make cavemen cringe.  It's one thing if a veterinarian performs surgery in a sterile way and manages pain.  It's another thing to simply tie a rubber band and wait for the tissues to die and fall off.

We did discuss contacting the local police department animal control division to report the breeder for animal cruelty.  The clients seemed very ready to do this, and I hope that they did.  The breeder needs to never have dogs around them again, and absolutely should never be allowed to breed anymore.  There needs to be consequences for such inhumane actions.

I haven't seen the puppy for a follow-up because they have a different vet they normally see and we just happened to be close by and open on a Saturday.  But the clients said that they knew she'd be just as upset.  With proper care this puppy should end up being fine in the long run, and I think she has the kind of people who will do whatever it takes.

I'm glad that there are people like those clients.
Posted by Chris Bern, DVM at 6:51 PM