Being a vet can teach you unexpected skills and bring unexpected dangers.  Here's a typical case....

Last week one of my techs was trying to restrain an unruly dog.  He wasn't aggressive, just very wiggly and didn't want to stay still.  We did what we needed to do with him, but she had difficulty getting him still enough and he kept trying to get out of her hold.  She managed to pick up a few new bruises and some minor scratches.  But one of the worst things that happened was that the dog got a foot in the pocket of her scrub top and tore the stitches from a corner.

Okay, so it wasn't a life-threatening problem.  And it was only the corner of the pocket.  But that's where the unexpected skills came into play.  I didn't want her to spend the rest of the day with a dangling pocket, so I got to work.  I've removed spleens, kidneys, and bladder stones and do surgery several days per week.  So I pulled out a pack of suture, some needle holders, and started a "laceration repair". 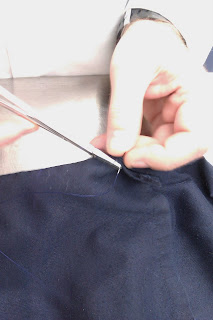 Dark purple suture doesn't show up well against navy blue scrubs, so it isn't easy to tell.  A simple continuous suture line and a few minutes later and the pocket was as good as new.  And believe it or not this isn't the first time I've performed this particular procedure.  I've sutured my lab coat pockets on more than on occasion.

Yet another unexpected life skill learned by being a vet.
Posted by Chris Bern, DVM at 12:47 PM