This weekend my family was at ConNooga, a smaller sci-fi/fantasy/anime/geek convention in Chattanooga, Tennessee.  It's one of our regular events, and we have a lot of fun there.  We go as part of a Christian fan group, Fans For Christ, and set up a table to talk to people as well as hold a church service.

But this year was special for a few reasons.  First, my wife finished her Rapunzel costume (from the recent movie Tangled) in time for the con, and it looks great!  Next she's going to work on a Flynn Rider costume for me so we can go as a pair. 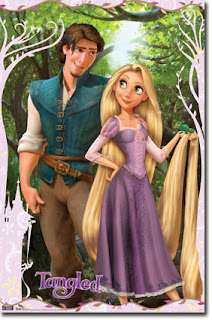 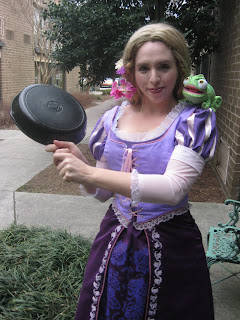 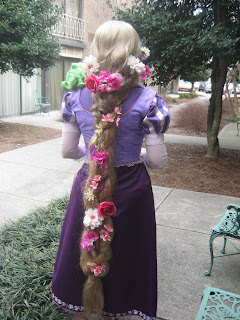 The other big thing was that I finally was given permission to build my own droid.  For the last several years I've slowly gotten to know some of the guys in a local chapter of the R2 Builders Club when they were set up at the con.  These people build full-size, functional, mobile, working astromech droids like R2-D2 in the Star Wars movies.  As a huge geek, I would love to have a working R2 unit in my possession.  My son also wants to help me build it, so it could be a bonding opportunity for us.  Some fathers and sons work on cars, play football, or other things.  We'd be building a Star Wars droid.  However, my wife was worried about the cost and time, so wouldn't let me do it.  This weekend she got to know some of the guys and their wives, learning that they're really nice people.  She also learned that the cost doesn't have to be as much as some people.  While some droids can cost $20,000-40,000, others can be done for less than $2000 (such as the ones at the con this weekend which still looked great).  It all depends on the materials used and what kinds of functions you want.

The defining moment came when I was talking to one of the guys in the club.  I told him that my son wanted to make an all-blue R2.  Dan walked me over to a nearby dealer that was selling Star Wars toys and showed me an action figure for R2-B1.

This figure struck me for a couple of reason.  First, it was the blue that my son wanted.  Second, it had yellow accents.  My father is from Sweden and I'm very proud of that Swedish heritage.  This droid is the color of the Swedish flag!  Lastly, this is R2-B1, and my last name begins with the letter B.  It was meant to be!

Don't recognize him?  He's actually briefly in The Phantom Menace, as one of the droids that goes out to fix Queen Amidala's ship as they're fleeing Naboo. 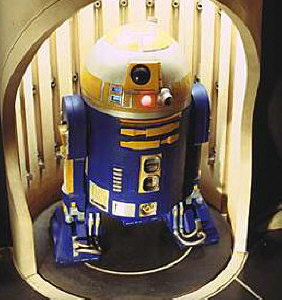 This will be a long, slow process, and will probably take a few years to complete.  It will also be strange as I have minimal to no abilities with electronics and mechanical devices.  I can remove a spleen and fix a ruptured diaphragm, but I'm not even comfortable replacing the wiring in a light switch.  Still, it will be so cool to have my own R2 unit.  Periodically I'll post pictures as the process continues.

Remember, there is much more to a veterinarian than being a vet!
Posted by Chris Bern, DVM at 12:56 PM