Sometimes I want to throttle pet owners and take their pets away.

This past Saturday a client walks in, says their dog was in a fight and asked if we could see her.  We were busy but something like that needs to be seen right away, so we said we would.  The dog had to be carried in on a gurney from the car because she wasn't able to walk.  This was a 70-ish pound female pit bull and we could quickly see that she was in bad shape.  She was covered in blood and we knew this wasn't a simple bite wound.  Apparently she had been attacked by another dog in the family and was brought in quickly.

One of my associates was the primary doctor on the case but we worked on her together due to the severity of the case.  As we examined her we could tell that there were numerous small to medium puncture wounds on her body, legs, and ears, all which were oozing blood.  None of them were serious by themselves, but added together they were a sign of a severe attack.  If it was just a few we knew we could sedate her, use local anesthetic, and quickly clean and suture the wounds.  But due to the sheer number of wounds it was obvious that it would take a long time to fix her, requiring general anesthesia.  We gave her some potent pain medications and a sedative while we were trying to work with the client on what needed to be done.  Here is what she looked like at that point. 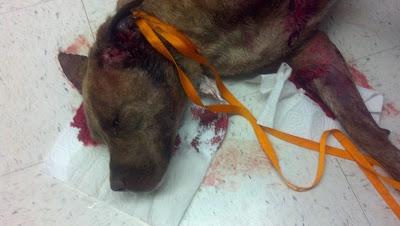 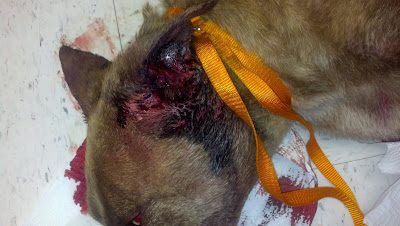 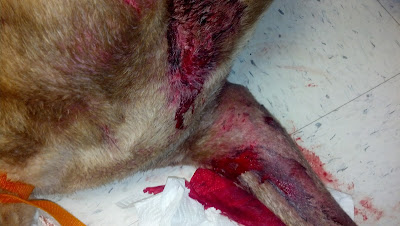 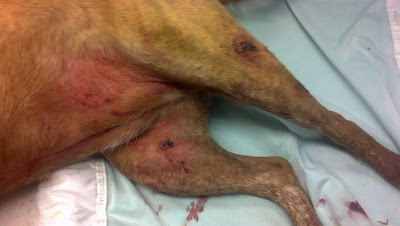 Believe it or not, the pictures don't really do the injuries justice.  And through all of this she never stopped wagging her tail!  She was the absolutely sweetest dog, and despite being covered by bruises and bites whenever we would talk to her or touch her she would immediately wag her tail.  All of us fell in love with her.

We were amazed at how many small punctures there were, but at the same time we knew this was a fixable situation.  With proper care she would likely be just fine.  It would take some work, but we knew we could do it.

The total for anesthesia, disinfecting the wounds, suturing the large ones, antibiotics, and analgesics came to over $700.  The actual owner was in California, the opposite side of the continent and country, and a friend of his was watching the dogs.  When my associate called him to discuss the case and get authorization to treat, he told us he didn't have the money and to just clean her up and send her home.

Even though the wounds were not immediately life-threatening there were so many openings into the muscle that systemic infection was a real and serious concern.  If we didn't treat her properly she could possibly die from infection.  This was also a case where it really had to be all-or-nothing.  We needed to do the expensive care in order to save her life.

We didn't know what we were going to do.  In good conscience we couldn't just let her go home like that.  We do have funds for situations like this, but in order to make sure they are available for pets who really need it we require the client to apply for Care Credit first, with people who are declined then having to meet financial needs requirements before being given the funds.  With these rules we keep people who have the money or credit from taking funds that other people need more.  This guy wouldn't even bother to try applying for Care Credit.  A nearby local shelter offered to take her if the owner would sign her over, but then when they saw the bill they said they didn't have the funds for that much care.  We were all extremely frustrated at the situation and couldn't believe how callous the owner was being.  The friend also didn't seem to be offering any solutions.  The whole time this dog was suffering.

I was on the verge of calling Animal Control and talking to them about whether they would intervene as an animal neglect case.  I've never come closer to doing so and trying to get law enforcement involved, but this was a moral issue as well as a medical one.  I also think I would have had a mutiny on my hands from my staff if I simply let them walk out.

Thankfully we managed a work-around.  When we send someone to collections for an unpaid bill it is first handled in-house through our own financial staff (we are a large practice with several satellite clinics, so we do things a bit differently than many vets).  Our own financial department gives the owner three months to pay their debt.  If it isn't paid off during that time they get sent to an outside collections agency and affects their credit.  This option was discussed with the client, who agreed to pay $100 and get sent to "collections" for the rest, planning to pay it off during the three months.

This meant we could get to work on her!  She was anesthetized, the wounds cleaned, and the long process of suturing begun.  It took somewhere around 30-45 minutes to get finished and my associate counted a total of 35 puncture wounds!  Here's a look at some of them. 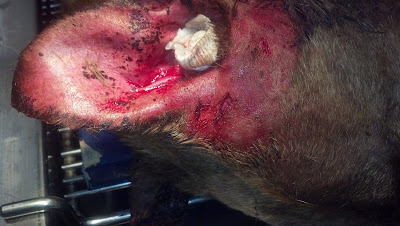 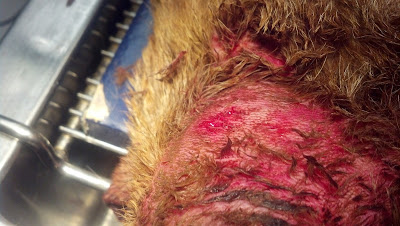 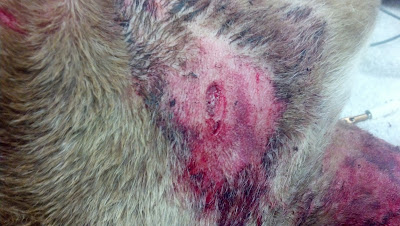 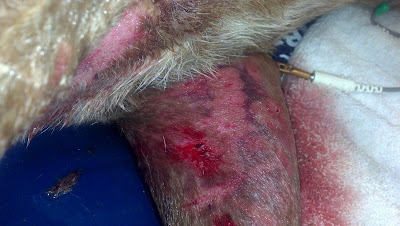 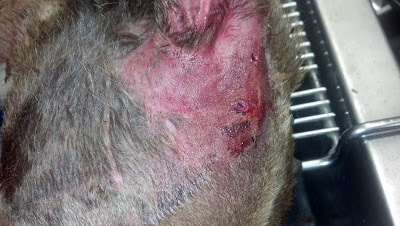 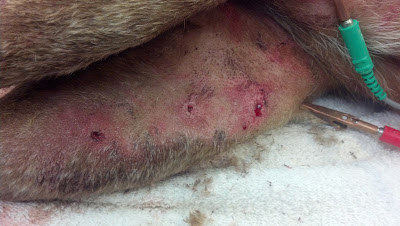 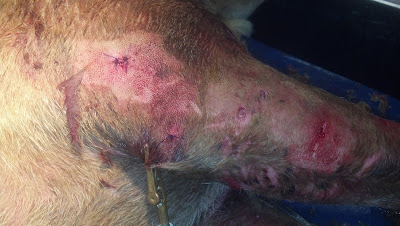 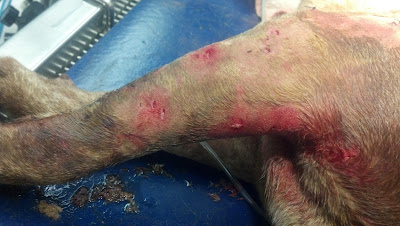 Later that evening she walked out of the clinic wagging her tail.  Yes, that's right.  Despite all of the injuries and deep bruises, despite hobbling out on four injured legs, her tail was wagging furiously.  Through all of the pain nothing could stop her spirit.  To me, that was the most amazing part of the whole ordeal.
Posted by Chris Bern, DVM at 9:59 PM