TPLO For A Dog's Knee

One of the most common orthopedic injuries in dogs is a rupture of the cranial cruciate ligament (CCL).  In humans this is the anterior cruciate ligament, or ACL, and is a very common sports injuries.  Just about everyone I've met has known someone who ruptured their ACL or did so themselves.  Dogs and cats can also cause damage to this structure, especially certain breeds such as Labrador retrievers.  When we see a dog come in with acute single hind limb lameness this is the first injury that we consider.

The main function of this ligament is to give the knee joint stability in a forward-to-backward motion.  The knee should have minimal movement in this direction and if the ligament is torn you have sudden instability.  You also get significant inflammation due to the damaged tissues.  In really bad cases the meniscus (cushioning pad in the joint) can also be torn, further heightening the damage.  This kind of injury typically occurs suddenly and after activity such as running or jumping.  The patient is painful, the joint becomes swollen, and there is usually noticeable movement of the joint (something called "drawer motion").  The combination of these symptoms results in the pet not wanting to put any weight down on that leg.  The nature of the damage also means that this does not get better in a day or two.

As with humans this virtually always needs surgery to correct.  Cats actually may not need surgery due to their size, less stress on the joints, and some minor differences in the flexibility of their joints.  If a dog doesn't have surgery they are looking at months of slow, gradual recovery and a joint that will always be unstable and possibly always be painful.  I have seen dogs go on to be normal after a CCL injury without surgery, but the it too a long time and the joints always developed arthritis earlier than would otherwise have happened.

There are two common ways to fix this injury and several less common ones.  The most tried-and-true is what we call an "extra-capsular" repair.  In this case the surgeon goes into the knee, removes any damaged tissue, drills a hole in the tibial crest, and places high-test nylon wire or suture in a pattern around the knee joint.  Removing the tissue debris allows the inflammation to resolve.  The nylon provides stability to the joint and once healed allows normal movement and weight-bearing.  This is a surgery that can easily be performed by a skilled general practitioner and there is rarely a need to have a specialist surgeon involved.  But not all vets are comfortable doing this procedure.  I'm one of them!  I can take out a spleen or kidney, remove bladder stones, repair a ruptured diaphragm, and similar soft tissue surgeries, but I just do not like orthopedic surgeries and don't do them.  While possible for a non-specialist to perform, and while being the least expensive of the CCL repair surgeries, this technique does carry the highest risk of complications.  The nylon suture can rupture at some point and therefore would need to be taken out and replaced.  You can also have more likelihood of arthritis in the joint compared to other procedures, but not as likely as if surgery was not done.  This is still a viable option if you cannot afford a more complex procedure.

The other common technique, and one most recommended by surgical specialists, is "tibial-plateau leveling osteotomy", or simply TPLO.  This is a much more complicated surgery as it requires the bone of the tibia to be cut, rotated, and held in place with plates and screws.  The goal is to change the angle of the "plateau" of the tibia (the part at the joint with the femur), preventing the femur from sliding along an angle when weight is placed on the leg.  This change in angle provides more stability and less slipping stress than other procedures.  The long-term outcome tends to be much better than with an extra-capsular repair and recovery is much faster.  The down side is that it can cost around  twice as much and often requires going to a specialty facility.

Such a procedure needs to be done by someone highly trained in the technique and with good experience.  Definitely not something the average veterinarian will do!  Typically this is done by a board-certified surgical specialist, though in some areas your vet may know someone who is highly trained as a surgeon but isn't actually certified.  I use that kind of doctor in my area because he will come to my clinic, and he's an awesome surgeon.

Besides education, why bring this up now?  One of my staff recently had this done.  What's interesting is that her dog had an extra-capsular repair on his left knee several years ago by a general practitioner.  Recently he tore the CCL in his right knee and needed another surgery.  The staff member is considering going to vet school in a few years and is well-versed in the field.  She did a lot of research and decided that she wanted a TPLO done on the newly injured knee.

The surgery went well and his recovery was fast.  I saw him around a week after the surgery and he was starting to bear weight on the leg.  Much faster than I've seen with techniques other than a TPLO!

A week or so after that he jumped up and down when someone came to their house, and then became lame again.  One of the most important parts of recovery for this surgery is keeping activity minimal until full healing has occurred.  We were worried that his jumping had torn apart the surgery and he'd have to go through it again.  Here are his x-rays, clearly showing the technique of the surgery (which is a main reason for the post....x-rays are cool!).  Please pardon any blurriness, as these were taken with my phone pointed at the computer screen. 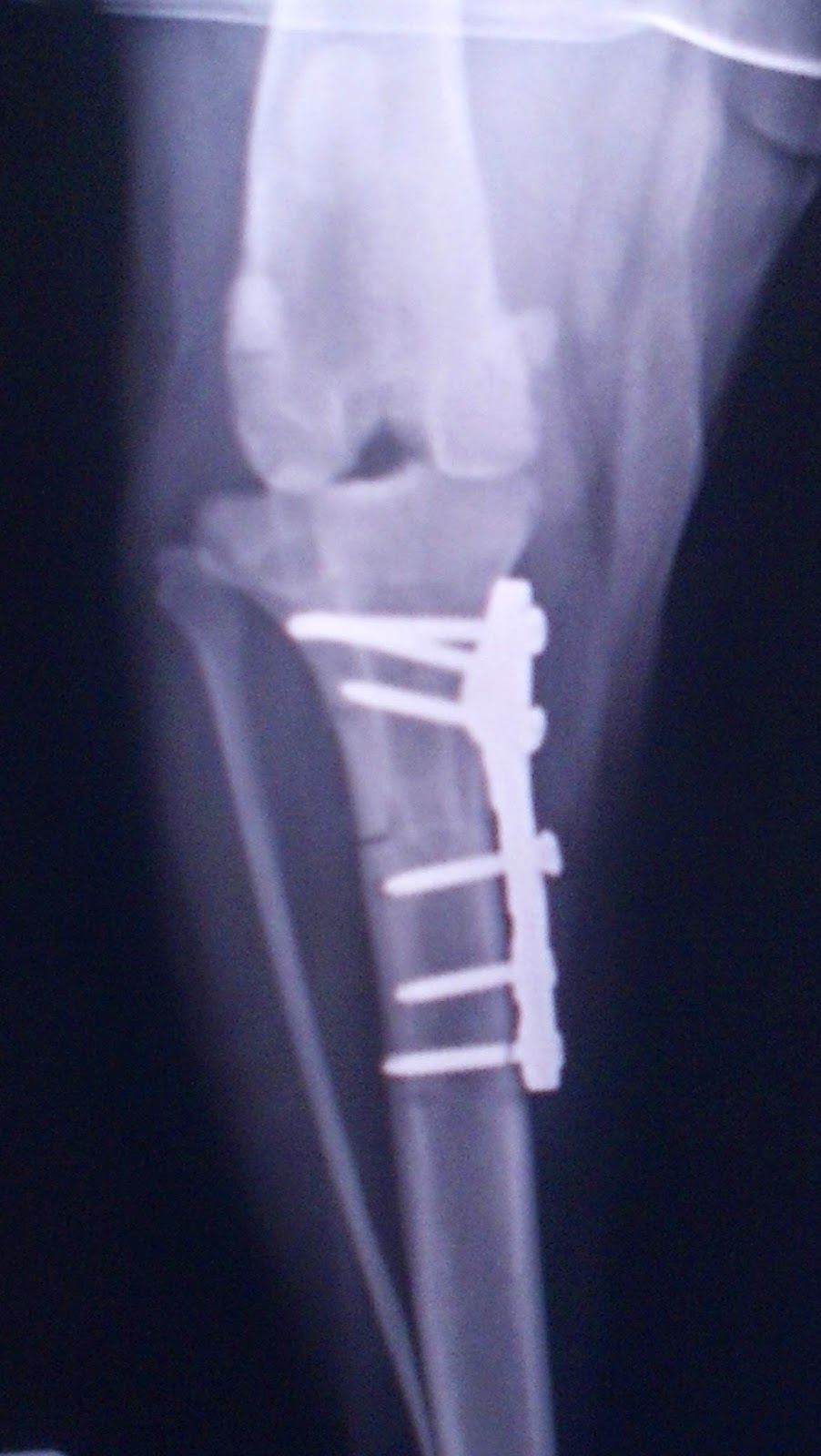 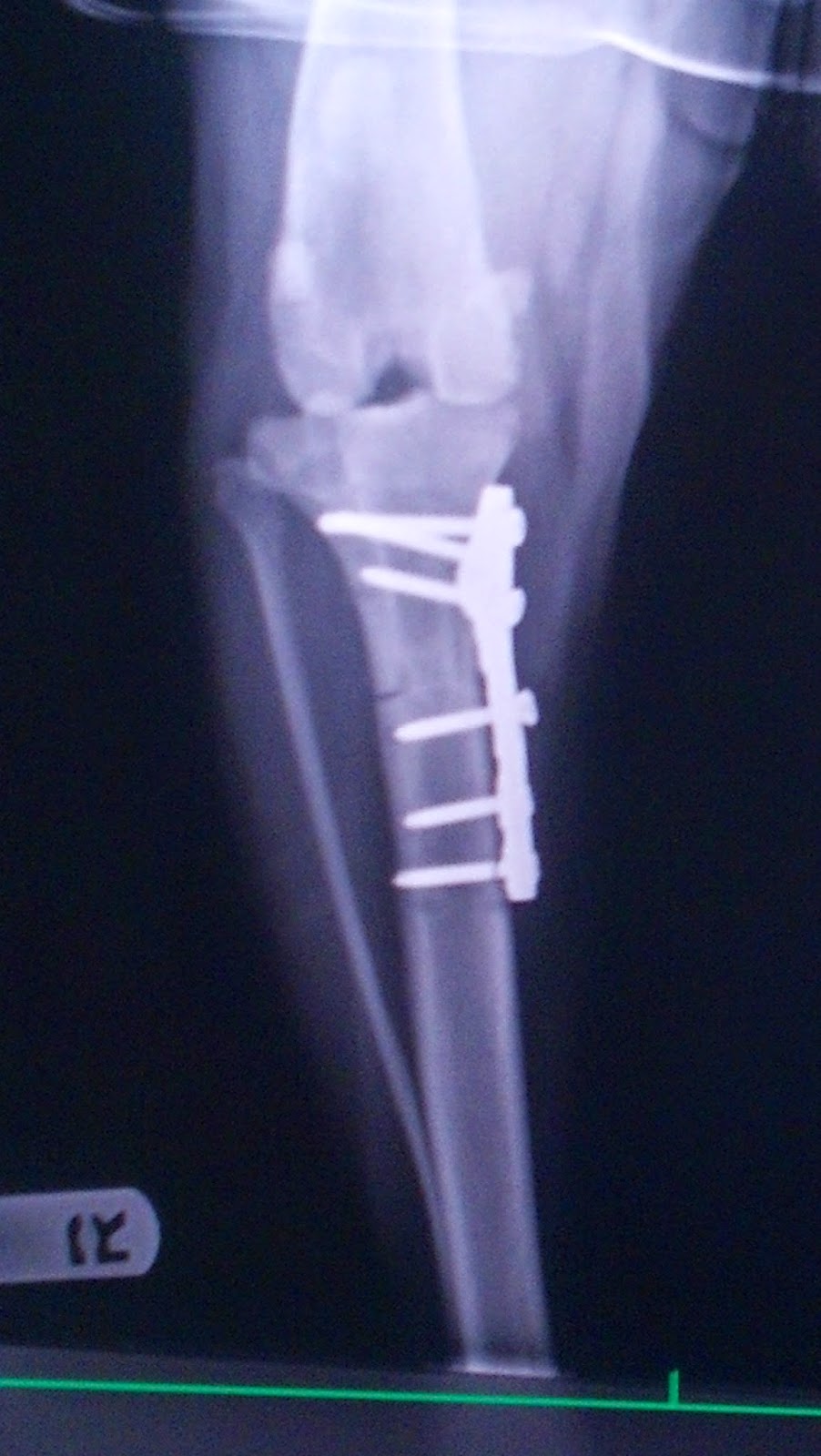 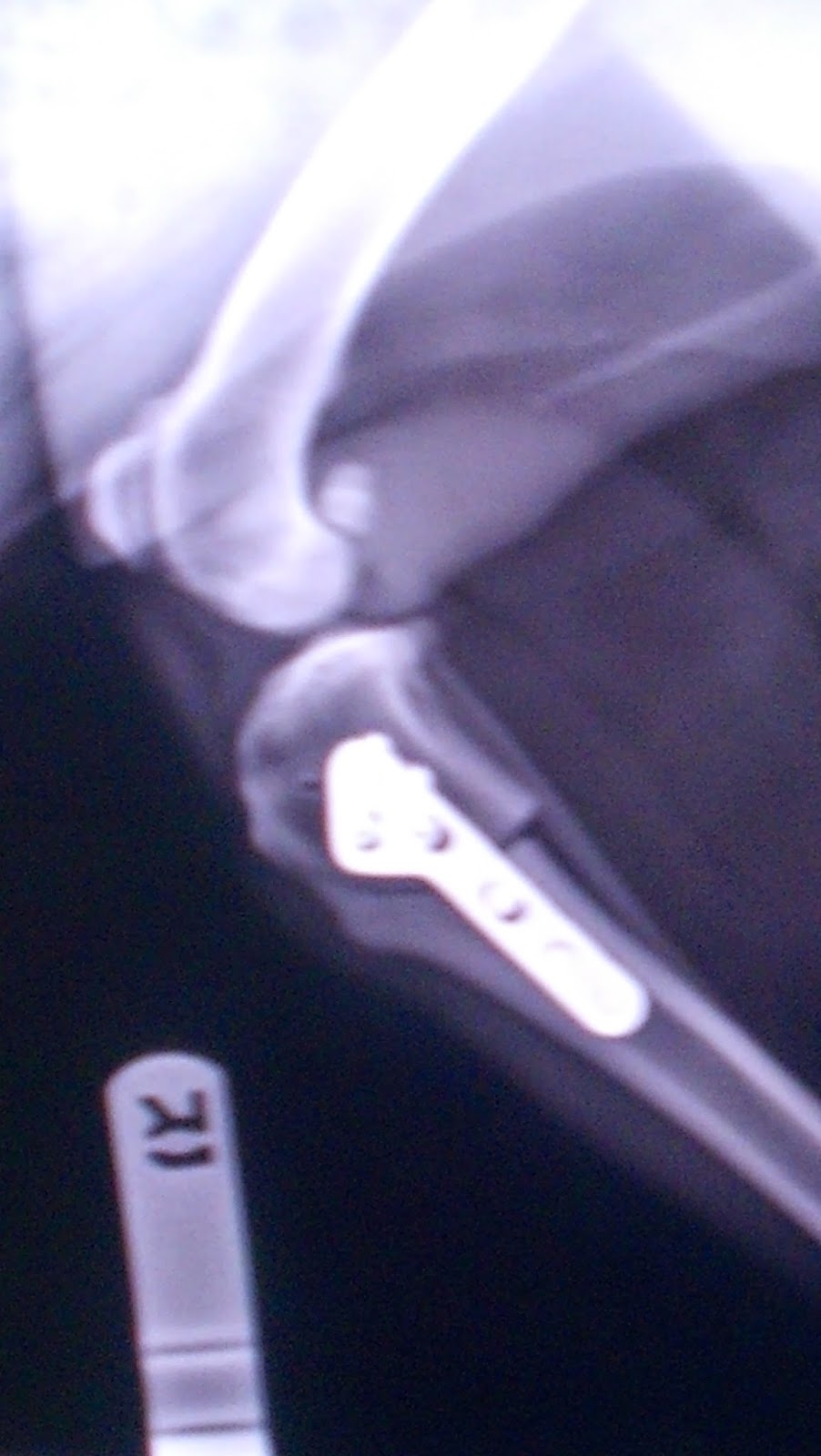 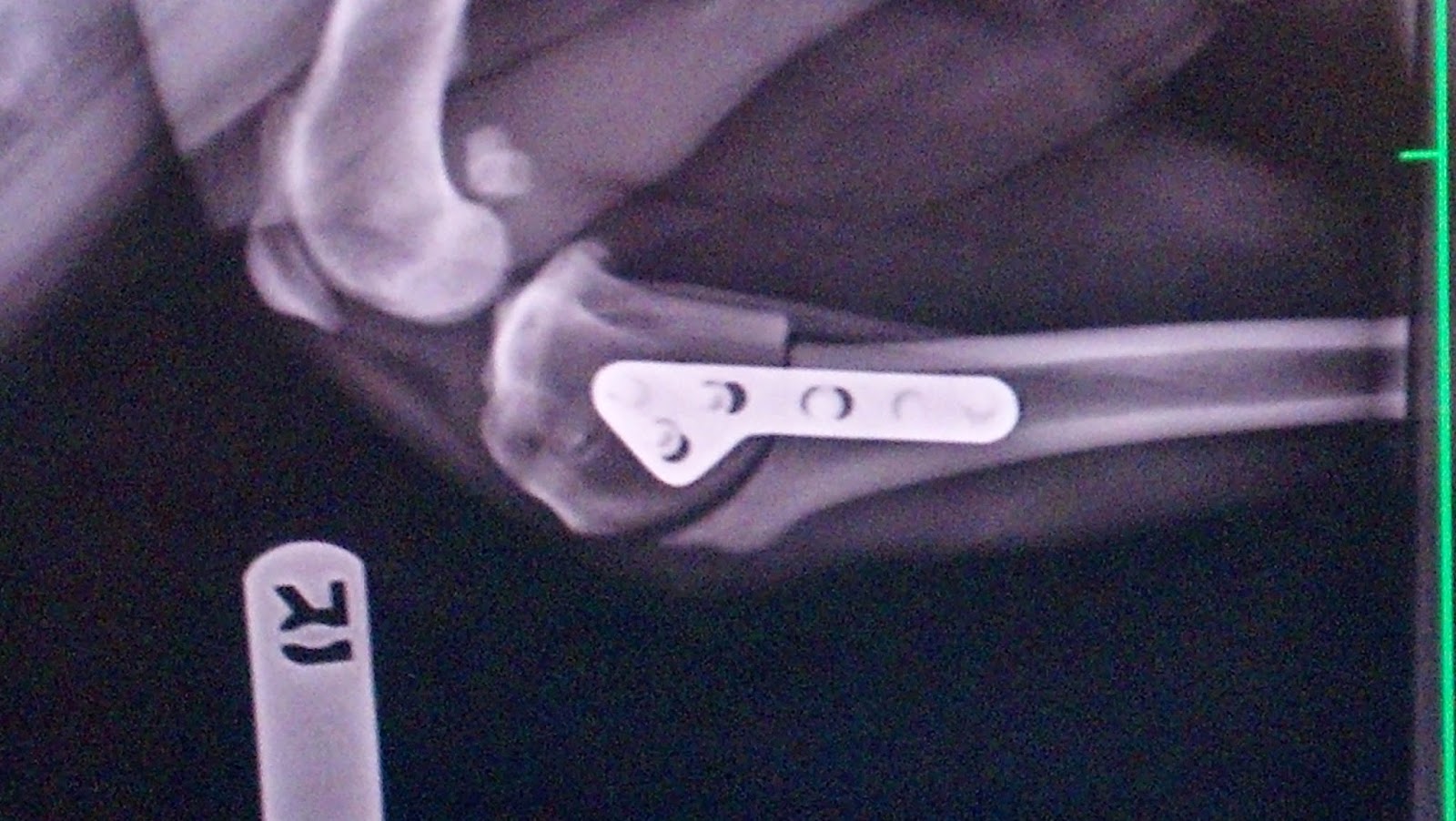 Thankfully everything looked good.  We put him on pain medications and anti-inflammatories, then went back to earlier rest and physical therapy.  Within a couple of days he was feeling better.  His owner was very happy that nothing had moved and he wasn't going to have to have another surgery.

Personally I think the TPLO procedure is better than extra-capsular, especially in large breed dogs.  But many people can't afford the $2000-$3000 price tag (depending on regional variation in prices), in which cases the extra-capsular surgery is still acceptable.

This is yet another reason why having pet insurance and setting money aside for pet emergencies is such a good idea!