Tonight I'm sitting on my back deck as I type this (thank you, wi-fi!).  The humidity and temperature are surprisingly low for this time of year and there's a mild breeze blowing, making the conditions exceptionally nice.  I bought a new grill today because my old one was literally falling apart from rust and a new one was overdue.  We didn't do anything big or special today, but sat on the deck under the table umbrella, talking and eating supper.  Afterwards we played a card game as a family.  Honestly, this was a wonderful evening.  Just me, my wife, and our kids, enjoying some relaxing time as a family.  Even now we're all on the internet together!  Yay, 21st century family!

Around us we can hear fireworks and can occasionally see flashes in the sky.  We don't go to official fireworks displays because of the crowds, though I'm sure my kids would like to.  On one hand the noise is a little annoying and breaks the peace of the evening, drowning out the crickets and tree frogs.  On the other hand it reminds me of the reason for the celebration.

To all of my international readers....please forgive me a moment of patriotism for my country.  While the US is far from perfect and we have made mistakes as a country both internally and externally, I do think we are the best country in the world.  I don't discount the worthiness and greatness of other countries, as my father is an immigrant and I've visited several places in Europe.  But at the time it was founded the US was utterly unique and unprecedented.  While we had some shaky moments in our first 100 years, we started to come into our own in the 20th century and with our technology, industry, and politics helped shape the world in modern times.  Without our intervention in both World Wars we would live in a much different global civilization and Europe would look much different.

I believe that our Founding Fathers, those who authored the Declaration of Independence and Constitution, were men of exceptional intelligence and wisdom.  They made rules and laws that formed this country, and while they had their own individual failings they also created something that lasted for centuries and influenced every other country in the world.  Since those times there have been countless lives lost in the defense of our country and freedoms.  My grandfather fought in World War I and I had two uncles in the Pacific theater in World War II.  I have had numerous friends over the years in various branches of the US military.  I am so grateful for the men and women who have served and sacrificed in order to preserve our way of life.

Yes, I'm a patriot and proud of the US, even with all of our failings and warts.  I certainly wish our political leaders would do certain things differently, and I do worry about certain parts of the future of our country (such as consistent overspending by both major political parties).  But I still wouldn't want to live anywhere else.  And if our country was so horrible, why do so many people still want to immigrate.

So Happy Birthday to the US of A!

And as a vet, I'd be remiss if I didn't at least briefly mention the countless dogs cowering in closets, under beds, and behind couches tonight.  While most of us like the fireworks, many of our canine companions really have serious anxiety issues and lost dogs are particularly common this time every year.  Take care of your pets! 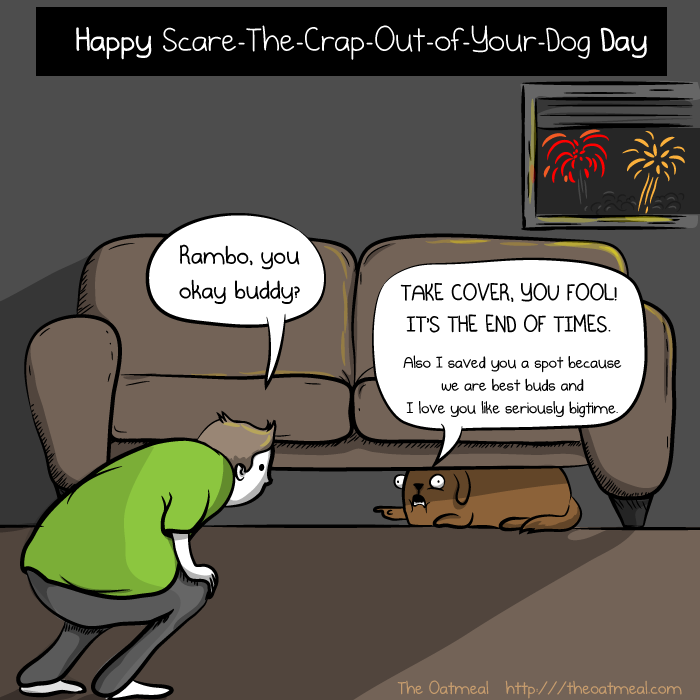