Boxers are great dogs, but unfortunately are prone to numerous diseases, including heart disease and cancer.  One of the more common disorders is overgrowth of their gums, a condition called gingival hyperplasia.

"Hyperplasia" simply indicates higher than normal growth or development.  When it affects the gums it will result in thick, lumpy, overgrown tissue.  In mild cases this just looks odd and by itself isn't harmful.  But in more severe cases it can cover the teeth and provide deeper pockets where food and bacteria accumulate, significantly increasing the risk of infections.  Very mild cases often don't need treatment but the aggressive ones always do.

Because this is a breed-related genetic disorder there isn't anything that can currently be done to prevent the problem.  The cells in the gums simply over-grown and over-produce tissue, ignoring the normal signals to stop growth and development.  Without somehow changing the genetic structure of those cells it isn't possible to stop it from happening.  The only option is treating it as the problem develops.

Treatment is rather simple and straight-forward.  We remove all of the excessive gum tissue.  This can be done with a laser, with a cauterizing tool, or simply with a scalpel blade.  There is more bleeding with a  blade than with the other methods, but it is never enough to be dangerous and will stop rather quickly.  The goal is to cut away the overgrown tissue until you have a relatively normal level of gums around the teeth.  In some cases this can result in quite a lot of tissue being removed, but results in a healthier, more normal mouth.

Here is a picture of a recent patient of mine, showing more severe gingival hyperplasia during a dental cleaning and before we removed the extra tissue. 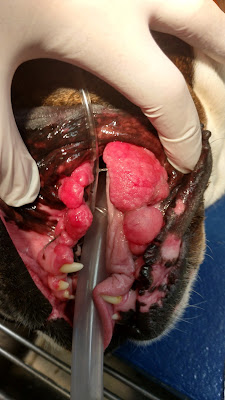 Here is the same dog after we removed the excessive gums but before we cleaned the teeth and the mouth.  You can see that there is some blood but the teeth are visible at a normal level.  Notice how much calculus and tartar is on the teeth that were covered by the hyperplastic gums. 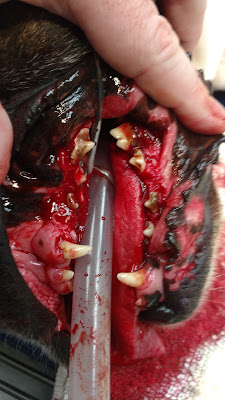 My patient recovered normally and went home without any bleeding from the mouth.  We did send her home with antibiotics due to some infection, but she made a full recovery and was eating normally within a few days.

The unfortunate part of this condition is that it is always recurrent.  We aren't removing the cells that trigger the hyperplasia, so it always comes back.  Most of these patients require some degree of annual removal of excessive gingiva for the rest of their lives.  That seems a bit brutal, but it is better than the discomfort and infection that they can suffer without the procedure.  If they are examined twice per year and have a dental cleaning annually, the amount of tissue that needs to be removed is less than if it goes for a few years without treatment (as it was in the case above).

I want to mention that there are oral tumors that can be quite aggressive and malignant, so simply seeing lumps on the gums isn't always benign hyperplasia.  If there is any doubt at all the tissue in question should be sent off for a biopsy.  If you see any kinds of lumps or growths on your dog's gums, take them to a vet right away to have it evaluated.
Posted by Chris Bern, DVM at 12:52 PM