Today in the US we remember those who have fallen and died in service to our country.  There is a saying, "freedom isn't free", and it's so true.  Without the service of the men and women in the military, past and present, we would not have the freedoms we have.  No, our country isn't perfect, especially nowadays.  But we have incredible freedoms to speak and argue because people have been willing to sacrifice themselves to protect those of us back home.  From the Revolutionary War, through the War of 1812, American Civil War, both World Wars, Korea, Vietnam, the various conflicts in the Middle East, and numerous smaller fights around the world, our military has defended the freedoms of ours and many other people in different countries.  Sure, we've made mistakes and haven't been perfect, but the brave, self-sacrificing military personnel far outweigh the bad apples.

I had two uncles who served in the Pacific theater in World War II.  When I was in high school I interviewed them for a US History class project, as well as a friend of theirs who was in a German prisoner of war camp.  Hearing their personal stories made a big impact on me that I can still feel 30 years later.  My Uncle Dan told me about having to dive into a ditch when Japanese fighters strafed his base.  My Uncle James told me about seeing a Japanese plane fly into a ship near his own.  Their friend told me about life as a prisoner to the Germans.  All of that made me see the daily life of soldiers, sailors, marines, and airmen/women.  It made me so proud that my family had served with distinction, and gave me an appreciation for what the military has to go through to keep the rest of us safe and free.

In my adult life I have had friends, relations, and clients who have served in more modern conflicts, from Vietnam to Afghanistan, and I owe so much of my ability to live and work in a free country to them.  I am truly appreciative of those who take time out of their lives and make the choice (remember, the US has an all-volunteer military....there is no required service) to defend our way of life.  Those who have died as a part of this service are especially deserving of our honor. 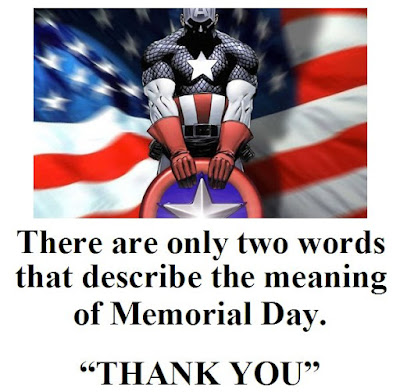