Here's the case that kept me from getting to the dog I mentioned in yesterday's blog.

A client of ours had found a little stray kitten and brought her in for the first exam and vaccines.  At first glance she seemed a little dirty, but overall a sweet little four month-old kitty.  We proceeded to collect blood for a feline leukemia and feline AIDS test, ear swab to check for mites, and a fecal sample.  As I started my exam, things seemed okay until I listen to her chest.  Very quickly I noticed something strange.

Like humans, dogs and cats have hearts that are in a position slightly to the left of the midline of the body.  This means that in a vertically-positioned chest, the heart sounds louder on the left side of the body.  When I used my stethoscope on the kitten, I found it very difficult to hear the heart at all on that side.  As I started listening to the opposite side, I suddenly heard the heart much louder than it should be.  The more I listened, the more it became clear that the left side of the chest was very muffled and the heart was pushed to the right.  There are only a few things that could cause this, especially in a young kitten.  I knew that there was something that was filling up the left side of the chest and pushing organs to the right. The most likely possibility was a herniated diaphragm with abdominal contents in the chest.

The main purpose of the diaphragm is to allow movement of the chest to facilitate breathing.  But the diaphragm also separates the chest from the abdomen, keeping organs where they should be.  A sudden trauma can put enough pressure on the body or abdomen to "pop" the diaphragm, similar to a full balloon being stepped on. Once the it has ruptured, the contents of the abdomen can spill into the chest.

Here are the kitten's radiographs. 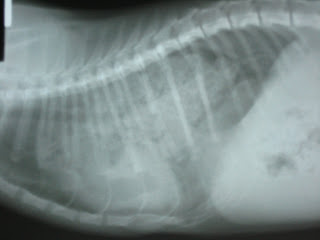 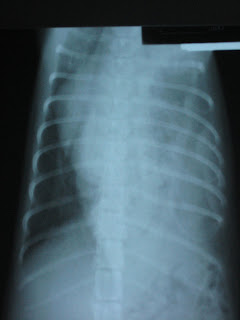 On the top image you can trace the line of the diaphragm and see the place where the normally sharp border becomes distorted and indistinct.  If you look at the left side of the bottom image you will see compressed but otherwise normal lung tissue.  The right side of that image is very hazy and opaque.  The astute observer will notice patterns of gas from the small intestines.  So it was very quickly evident that small intestine and possibly liver and stomach were sitting in the left side of the kitten's chest.  Such an problem compromises the ability of the lungs to inflate, making it difficult to breathe.  There is also the risk of some of the abdominal contents becoming "pinched", cutting off blood supply.

Surgery can be done to correct this type of injury, but it is risky and expensive.  I've performed this surgery successfully several times, once on a kitten this small.  However, the client didn't have the money and didn't want the kitten to suffer, so they elected to have her euthanized.  Her two children were in the room as we talked about this and they began to cry.  I was trying to help her explain to them that as sad as this was, putting the kitten to sleep was the best thing for her.

And it was while I was handling this case that the shih-tzu owner I talked about yesterday came in all upset because I didn't have time to come right out and speak to her.
Posted by Chris Bern, DVM at 9:35 PM