The Play's The Thing

Regular readers may have noticed that my posts have been a little less frequent this month.  And there's a good reason for that.  My wife and I do community theater and have been in a production of Is He Dead?  Rehearsals have been fast and furious, and last week was the play's opening.

The play was written by Mark Twain, but never published or produced.  It was found in an archive of his works, adapted by modern playwright David Ives, and first produced on Broadway in 2007.  To quote a description of the play...  "Richly intermingling elements of burlesque, farce, and social satire with a wry look at the world market in art, Is He Dead? centers on a group of poor artists in France, who stage the death of a friend to drive up the price of his paintings. In order to make this scheme succeed, the artists hatch some hilarious plots involving cross-dressing, a full-scale fake funeral, lovers’ deceptions, and much more."

Somehow I got wrangled into playing multiple roles, apparently a tradition developing.  I portray an English art buyer, a French reporter, the king of France, a "gorgeous flunky" (yes, this is how the script describes the part), and a surprise twist at the very end.  A total of 4 1/2 characters, each with a different accent and mannerisms.  My wife says that they finally found a role for all of the voices in my head.

The play is very funny, and as much work as it's been, I've thoroughly enjoyed being a part of it.  Here are a few choice pictures... 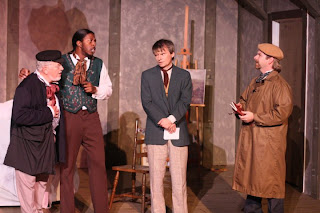 Me on the right as "Claude Riviere, journaliste from 'Le Figaro'." 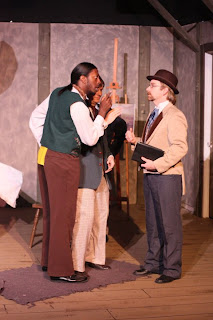 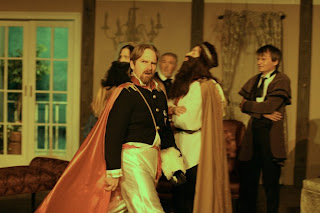 The King of France, unhappy about the circumstances. 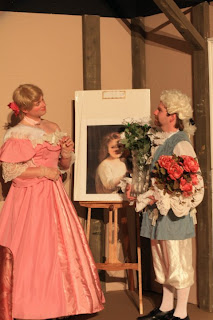