Today's post is about a Siberian husky named Diesel.  He's a sweet six-year old boy that first began having problems in late 2012.  At first there was just some inflammation noted in his eyes, which we treated and it seemed like everything was okay.  Two months later, in December, he came in for more eye problems.  It didn't take long to determine that his eyes were painful and his eye pressure was very elevated.  A rather simple diagnosis:  glaucoma.  In his case there was still some inflammation within the eye (uveitis for the medically-minded) and I suspected that the glaucoma happened secondary to the first problem.  Whatever the cause, it needed to be treated and quickly.

I sent him to a local veterinary ophthalmologist the next day and she began treatment with multiple medications.  Over the next several months we slowly got his glaucoma under control with a few setbacks here and there.  The owners hated having do use 4-5 different eye drops every day, but they were willing to do so if it helped him.  Unfortunately he stopped responding as well, which brought us to May.

He made another visit to the specialist a couple of weeks ago and it was determined that his left eye had lost all vision and the right eye had only minimal vision along with a displaced lens.  The left eye was not salvageable, and the best thing to do was to remove it.  However, the right eye was mostly blind and the ophthalmologist gave it a guarded prognosis at best.  He could only see shadows to a certain degree and there was a high likelihood that the "good" eye would fail at some point in the future.

This situation led to a discussion between me and the client.  It was obvious that we needed to remove one eye.  But there was a strong justification for going ahead and removing the other one at the same time.  Both eyes were causing pain and discomfort.  He also did not like the multiple medications used to even somewhat control the glaucoma.  This was a lot of hassle, time, and expense for something that wasn't completely helping the problem.  We began to talk about doing a bilateral enucleation (fancy medical words for "removing both eyes") since there was a good chance that in six to twelve months we'd have to remove the other one anyway.

This was not an easy decision and I'm sure it sounds radical to many readers.  But in circumstances like Diesel the eyes are more of a problem than a benefit.  Neither of them was functioning well and he was effectively 80% or more blind already.  We think about it in our own terms and can't imagine not having our eyes.  Even if we were blind, removing such an important organ makes us cringe.  But with Diesel removing the eyes would be helping his comfort in the long run, and given that he is only six years old he still has a lot of life left in him.  The client thought long and hard and finally decided to go ahead with the surgery.

Here he is before the surgery.  You can tell that he is squinting his eyes more than a normal dog would, and that's due to the pain from glaucoma. 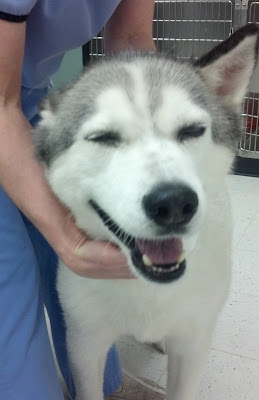 Here is a close-up of the left eye.  It's a little difficult to tell from this photo, but the eye is very cloudy and the pupil is dilated. 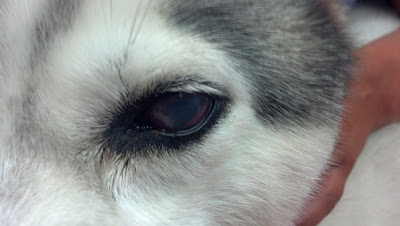 I've performed enucleations before, but this is the first time I've removed both eyes on the same pet.  As far as the technical aspects of the surgery, it went very well and without any complications.  In this kind of surgery we remove the eye, muscles, and tear gland (along with the associated third eyelid membrane).  We cut the edges of the eyelid and then sew them together so that there is no longer an opening.  Some specialists may place an artificial eye in the socket just to maintain a more normal, rounded appearance, but this is purely cosmetic and doesn't affect the surgical outcome.  It's also something I don't do.

Here he is immediately post-operatively. 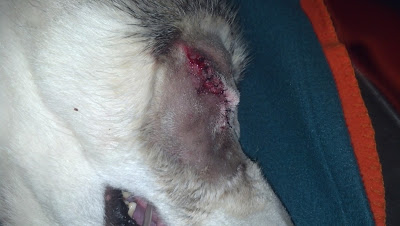 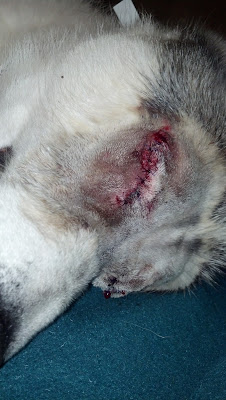 The initial recovery period was a bit rough, despite extensive pain medications.  But he started coming around and relaxing.  My entire staff kept talking to him and when they were available would open his cage and pet him.

By the end of the day he was ready to go home.  He even wagged his tail as we walked him out to his owners! 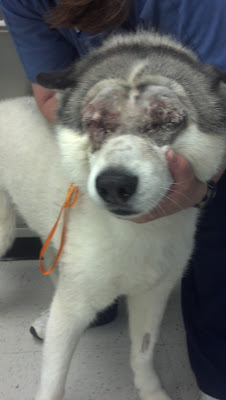 I have known other dogs who have had double enucleations.  They actually do very well and learn to cope well with their new life and lack of vision.  They can still have a great quality of life and be very happy.  While I only recommend doing this radical of a procedure in extreme circumstances I also feel that this is not unfair to the pet and really is helping them.

Diesel and his people will have an adjustment period.  He will have to learn to get around without any sight or light at all.  The owners will have to learn to be patient and not move furniture around a lot.  But once he heals from the surgery he will be pain-free and will no longer have to deal with the hassles of eye drops.  We anticipate continuing to see him for many years to come.
Posted by Chris Bern, DVM at 9:42 PM