No Eyes? No Problem!

A couple of weeks ago I blogged about Diesel, a Siberian husky whose eyes I had to surgically remove due to uncontrolled glaucoma.  Last week I saw him for his final post-operative follow-up visit, and he is doing absolutely great. 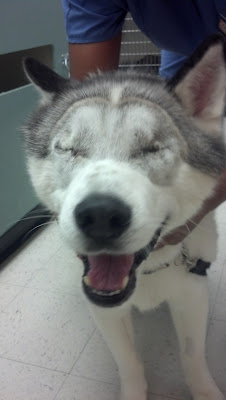 He was wagging his tail and giving us kisses, obviously very happy with life.  His incision healed perfectly and he had no post-operative complications.  The owners said he was perfectly content at home and was taking stairs without stumbling or running into things.  They were surprised at how well he was maneuvering their home and were preparing to start taking him for walks around the neighborhood again.  One of their initial concerns was that he would be more cranky and nippy towards their young children, even though he was extremely docile beforehand.  But his personality never changed and he acted just as sweet after the surgery as before. 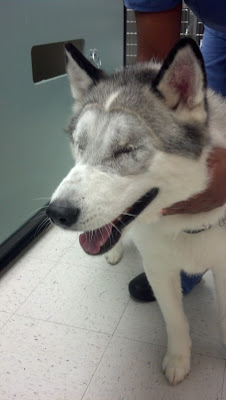 The owners are extremely happy with the procedure and his outcome.  He is no longer in pain and they don't have to put multiple medications in his eyes several times per day.  He can now go on to live a normal life as he is healthy in every other way.  The owners have their dog back with just a few missing eyes. They are very grateful that we were able to help him and that he is doing so well.

Being a veterinarian can be an extremely frustrating, draining job.  Every day we have to deal with clients that  refuse our recommendations, argue with us over costs, or simply don't want to do what's best for their pet.  We see pets and their owners suffer because they can't afford necessary treatment even though they want to.  We watch pets die and help people let go of their best friends.  I face bodily harm literally every day I'm at work as we always have dogs and cats that want to scratch or bite us.  The money isn't great for the amount of education and debt we have.

Here we had owners that really wanted to help their pet and followed all recommendations, even when it was frustrating giving all of the medications and they questioned if it was really necessary.  Spending the money on specialists and surgery wasn't easy on their budget, but they found a way to do it.  The dog was super-sweet, we got to do a very cool (to us) procedure, and he recovered perfectly.  This was one of the most rewarding cases I've had in a long time.  The pet was suffering and we were able to help the entire family.  Yes, it was radical surgery, but it made such a positive difference in his life and his humans that it was all worth it.  Writing about him makes me smile, and I know we'll be seeing him for years to come.

This is what being a vet is all about.
Posted by Chris Bern, DVM at 3:44 PM