Timing can be a funny thing sometimes. Two days ago, after I made the decision to euthanize Perceval, my wife mentioned that we could get a new kitten. I nixed the idea right away. It was a bit odd to think of doing that so close to Percy's death, and I also wasn't eager to go through the kitten stages again.

Yesterday a kitten was found abandoned by a nearby dumpster, and somebody brought him in to be checked over. He was about six weeks old, and overall good condition. He was also a little cutie. We knew the person who brought him in and knew that she was looking for a home for him. All of my techs immediately started trying to get me to take him. I, of course, said no. Every time he would meow, my lead tech would say "Daddy" in a little voice and hold him towards me. We agreed that we help to try and find him a home.

Now normally I'm not that big of a softie and I'm good at resisting abandoned pets. I've been in the veterinary field for 25 years, and during that time have only taken home one homeless pet...and that was Perceval. In that time I've only been tempted a handful of times, and always been able to pass on the opportunity. But as I held that little abandoned kitten yesterday, something inside me melted. There was a certain something about him that drew me to him, and I became really tempted. Somehow I thought that I might be jumping the gun and getting a new pet too soon, or that I would be doing a disservice to Percy. But the more I was around him and the more I thought about it, there was just a feeling and a bonding I felt. I called my wife and she was surprised that I was actually considering adopting him. When I told her about this feeling I had, she said it was meant to be.

So I have a new kitten now. Yes, I caved in and took him home today. It was a bit strange in a way, as I also buried Percy today. But right now he is asleep on my shoulder, and seems to be very drawn to me. My wife is determined to make sure that he is my cat, even though he will be around the family. She knows it will help my loss of Perceval to have another kitty friend.

The little one's name is Tristan. When I first started getting cats I established a theme of Arthurian knights (Galahad, then Perceval), and decided to keep with that. The other cats, Ash and Pooka, are not so sure about him. Guinevere is her usual sweet self and has taken to trying to lick him silly. Inara is very curious and wants to play, but hasn't learned that her normal rough play like with her big sister is too much for little Tristan.

Perceval will always be remembered, and will have a very special place in my heart. But I think that Tristan will become a new close friend, and will help with some of the sadness. 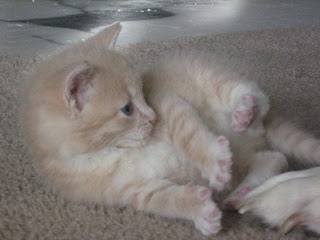 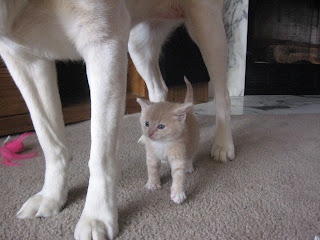