A while back I had a small leak from my bathroom shower that dripped down into the ceiling of the laundry room underneath.  It was a very slow leak, but enough to drip on the ceiling tiles (it's a drop ceiling) and through them.  One of the tiles closest to the wall became soft enough to eventually crumble, leaving a small gap.  I finally figured out where the leak was coming from and fixed it, but still haven't gotten around to replacing that tile. 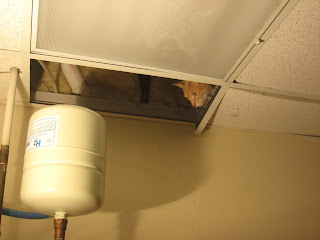 That's when I discovered that one of my cats, Tristan, decided to make the area in the ceiling his personal play place.  One day we heard him meowing but couldn't find him.  It took a while of searching before we heard him walking above our heads.  Lifting up a tile, we quickly found him looking down at us curiously.  It seemed like he was saying, "Hey, guys, look what I found!  Isn't it cool!"  To get up there he jumps on the washing machine, then onto a shelf just above that appliance which also happens to be just below the opening.  Since our discovery, whenever we wonder where he might be, he can inevitably be found hunting for who-knows-what in the ceiling. 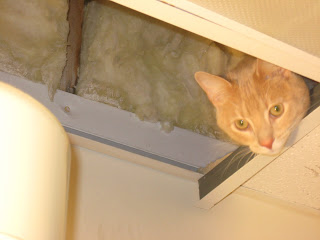 Thankfully, there really isn't anything up there to hurt him, so I haven't worried about it.  I did buy a replacement tile, but haven't gotten around to putting it into place.  Tristan has had access to the ceiling space for a few months now, so I know that when I finally do fix the tile he's going to be surprised and probably a little miffed.  Until then, he gets to have his own private play-place. 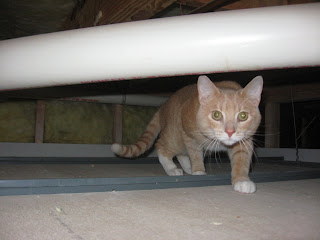