In the northern hemisphere it's now spring, and that means it's also allergy season.  For some parts of the US this is simply a nice time when plants bloom and the weather starts to warm up.  But for other places, such as where I live, it means that we get to pay attention to daily pollen counts.  The worst part is the layer of yellow that coats everything:  cars, streets, porches, and pretty much anything that spends even a few moments outside. Thankfully my seasonal allergies aren't too bad.  But that pollen gets into some amazing places.

One of the most common tests we do is a fecal exam, looking at prepared fecal samples for parasite eggs or other microorganisms.  One of the routine findings during this time of year is pollen. These small particles have been swallowed by the dog or cat and made their way completely through the digestive tract.  They're easily identified, as the most common kinds look very similar to a Mickey Mouse head. 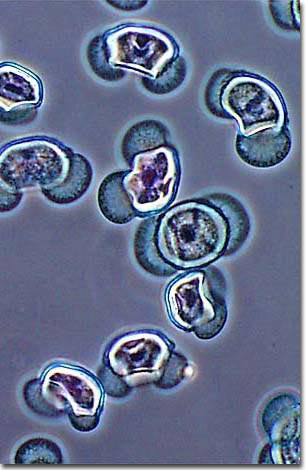 Today I actually found some pollen on a skin scraping.  This is a superficial scraping of the skin with a dulled scalpel blade to look for skin mites.  It was surprising to see such a large amount of pollen, though the dog had been outside during the day.  However, I shouldn't have been so amazed, as pollen contacting the skin is a common cause of allergy disorders in pets.  Contrary to most people's beliefs, most pollen allergies cause itchy, irritated skin rather than the sneezing and itchy eyes that people get.

So here we are, having to deal with the ubiquitous yellow powder over everything, including our pets.  It's an annual event that won't go away, no matter how much we complain about it.
Posted by Chris Bern, DVM at 9:54 PM