Anyone who has birds should know about blood feathers.  This isn't a disorder and is a natural part of the feather growth.  However, broken blood feathers can be a big mess.

When a new feather starts to grow in, it has blood in the shaft to give nutrients during the growth phase.  The blood gives the shaft a dark blue appearance and is very distinctive.  Here are a couple of pictures. 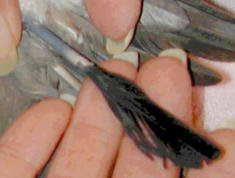 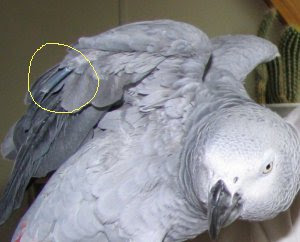 Once the feather reaches full growth, the blood recedes, leaving the shaft hollow and clear.

Problems can happen when the blood feather breaks.  This can occur when the wing or tail beats against the side of a cage or other hard object, during rough handling, or during a wing trim.  Since the shaft is filled with blood and has a connection to the rest of the circulatory system, there can be a lot of bleeding.  Luckily, there is rarely any life-threatening blood loss.  However, this can be very messy and certainly cause the bird owner a lot of concern.  So if this happens there are a few things you can do at home.

1.  Wait.  Many times the bleeding is minimal and will stop on its own.
2.  Apply flour or cornstarch with some direct pressure at the break.  This isn't quite as good as styptic powder, but virtually everyone has one of these ingredients in their cabinets, so it's something that can be used in a pinch.
3.  If the bleeding won't stop, you can pull the feather out yourself.  This isn't easy for many people, and usually involves one person holding the bird while the other plucks the feather.  At home the best tool is needle-nosed pliers, but a pair of hemostats is easier and what I use in the clinic.  Grab the broken feather at the base and pull hard with a solid, steady yank.  The idea is to pull the feather out on a single pull, rather than drawing it out slowly.  Usually removing the feather stops the bleeding.  If any bleeding remains, do step #2 on the area where the feather used to be.
Posted by Chris Bern, DVM at 10:07 PM