This Is Why You Spay...**GRAPHIC IMAGES**

We veterinarians talk to clients all of the time about spaying pets.  It's one of the most frequent recommendations we make, and we have very good reasons for doing so.  Even though spaying helps prevent numerous serious medical problems, many people don't do it.  And that can lead to disaster.

A couple of weeks ago we had an 11 year old German shepherd come in for lethargy and vaginal discharge.  She was unspayed because the owners originally had intended to breed her.  This never happened (as is usually the case...most clients who tell me that they may breed never end up doing so), but they never had her spayed.  A few x-rays and lab tests later and we validated our suspicions...she had a pyometra.

Pyometra is the medical term for a uterine infection.  This isn't like a urinary tract infection, skin infection, or sinus problems where we can prescribe antibiotics and everything will be fine in a few weeks.  In a case with a pyometra the uterus fills with pus and is something that rarely responds effectively to antibiotics alone.  This is a life-or-death situation that requires immediate emergency surgery.  If surgery isn't performed quickly the uterus could rupture, releasing pus and bacteria throughout the abdomen and almost assuredly resulting in death.  The surgery itself cares a high degree of risk as the uterus is usually very fragile and could rupture during routine handling. Also there is a risk of pus and infection leaking from the cut areas of the uterus, resulting in contamination of the abdomen.  Serious problems!

Thankfully the owner agreed to the surgery.  When I got inside, the uterus was large and distended with pus just like I expected.  Here's what we found...WARNING...The following images are graphic photos of the surgery and are not for those offended or nauseated by such images.  Scroll down at your own risk!!!! 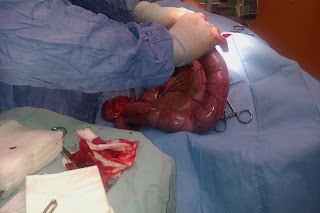 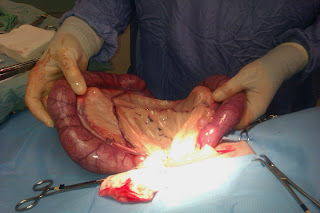 This uterus is many, many times larger than it should be.  A normal uterus in a dog this size and age should be somewhere between the size of a large pencil and a small marker pen, or similar in diameter to one of the instruments in the picture.  However, this is not the largest pyometra I've dealt with.  And this wasn't the only problem. 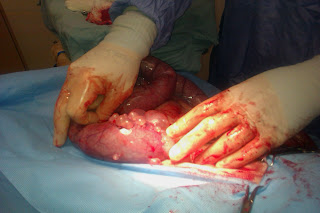 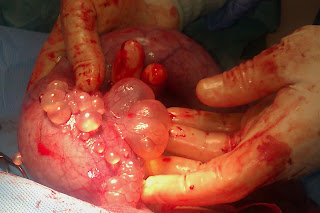 Sometimes I'll see cysts on ovaries when I'm doing a spay, especially on an older pet.  Normally there are just a couple of cysts, usually no more than 2-4.  This dog had literally around 20 on each side, and whereas cysts are normally on the ovaries, in this case they extended along the uterus itself.

Thankfully the surgery was as uneventful that we would want, the uterus didn't rupture, and the patient did spectacularly. Here's the uterus once it was removed, again many times larger than it should have been. 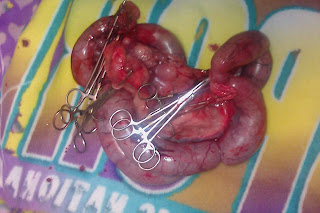 I just saw her a couple of days ago for her 10-day postoperative recheck, and she was in great condition, wagging her tail and acting like nothing had ever happened.  This was a very successful surgery with a great outcome.  But there was no reason why this needed to have happened.

Situations like this one are why we recommend having pets spayed.  A routine spay at our clinic runs around $350.  This client paid around $1400 for diagnostics, surgery, and medications.  That's more than four times what she would have paid if she had simply had her dog spayed!  She would have also prevented the life-threatening risk to her pet.  Thought this turned out well, it may not have and could have resulted in the dog's death.