**CAUTION**  Graphic images of surgery are presented on this entry!  Viewer discretion is advised!

Though no surgery is without risk, some are certainly higher risk than others.  I had two similar cases a couple of months ago that each had very different outcomes.

The first case was a young American bulldog.  A little over a year ago he had surgery to remove a rock lodged in his small intestine.  He presented to me with similar symptoms, lethargic and vomiting.  The owner was concerned that he ate part of a cloth toy.  The first set of x-rays didn't show anything, so we did a barium series which showed a blockage in his upper GI tract or stomach.  The owner gave the go-ahead to do surgery.

First I explored the stomach because that was where the barium seemed to stop.  He was a large, deep-chested dog so I had to work in a bit of a hole.  If you've ever wondered, here's what the inside of the stomach looks like. 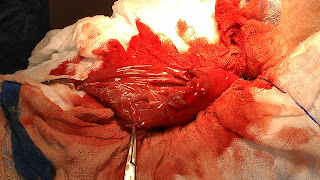 I spent a good bit of time emptying his stomach and both looking and feeling around.  About 30 minutes later and I had to conclude that the obstruction wasn't there.  I closed up the stomach and went looking through the rest of the GI tract.  It didn't take too long to find an obvious abnormal object in the small intestine. 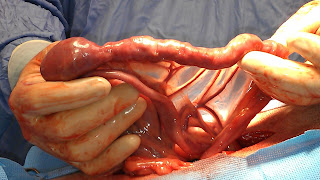 It took a couple of incisions, but the object came out and I closed the intestine and the patient.  Here's what was in there. 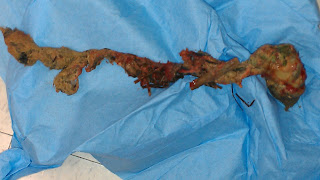 He did well immediately post-operatively and we had the owner take him to the closest after-hours clinic for monitoring since it was such a major surgery.  Over the next few days he didn't seem to be doing well, then ended up at the emergency clinic again.  This time he apparently had peritonitis (infection within the abdomen) from a possible leakage or other infection.  Due to the costs and the prognosis, the owner elected euthanasia.

A week later I saw a cat that was acting the same way.  The owner did have ribbon around but had always been very careful with it since the cat had a tendency to chew on it.  She even cut the ribbon off her children's' balloons to keep them from the cat.  An x-ray didn't show anything but the owner was worried enough that she wanted exploratory surgery.  Once I got in there it didn't take long to find an obstruction. 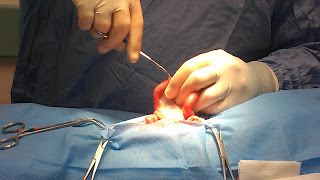 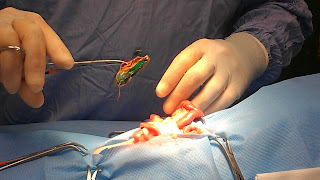 Here's a better view from post-op. 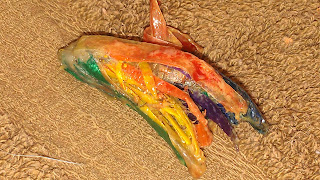 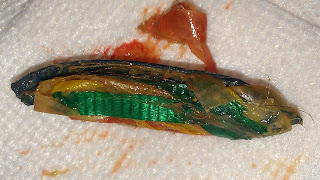 Yes, that's ribbon.  And the owner couldn't remember having any ribbon of those colors, especially together.  The cat did better, recovered quickly, and looked great on the 10-day post-operative recheck.

Two intestinal surgeries, same surgeon, two very different outcomes.  Unfortunately we can't say that every surgery will do well and there will never be complications afterwards.  Even the best surgeon can only minimize risks, rather than eliminating them.  Surgery on the stomach and intestines is always very risky, but usually is better than death.  Numerous things can go wrong, even if the surgery is done properly.  Even if you're careful, an incision may leak, especially if there is a lot of movement afterwards.  The dog did vomit a little within 24 hours of recovery, which might have pulled on the stomach sutures.  If there is damage to the walls of the stomach or intestines the risk is higher, though this wasn't a problem in these cases.

Another lesson can be learned in these cases.  Be very careful about what your pet has a chance to chew on!  In the dog's case this was his second GI surgery and there was some internal scarring from the first one, which may have affected his outcome.  Both pets were known for chewing on things and the owner didn't see them actually swallow what I removed.  The other lesson is to not automatically assume the pet didn't swallow something just because you didn't find anything missing or chewed on.  The cat's owner never figured out what ribbons the cat had gotten into.  I have seen more than one case where the owner insists their pet didn't eat anything yet we find it on x-rays or in surgery.
Posted by Chris Bern, DVM at 8:20 PM