Our two-year-old lab, Yvaine, is a sweetheart and a bit of a coward.  If she hears a noise she'll bark loudly at it and then often squeeze her 65 pound body under our bed.  She is my wife's baby, having been picked out when she was two weeks old.  And yesterday she was a hero.

My wife was in the bedroom working on her laptop.  Yvaine comes into the room barking and acting really strange.  She wouldn't stop barking and wouldn't settle down.  She didn't act really fearful, but also wasn't simply barking at a noise.  So my wife got up to try and figure out what was wrong.  Yvaine went downstairs, still barking and acting restless and odd.  This wasn't even her typical attitude when she heard a noise and my wife couldn't figure it out.

Once downstairs she noticed our other dog, Inara, standing and looking out of our back door.  She was calm and not barking, though was interested in something outside.  My wife went over and started to look outside.  That's when she noticed that the back door wasn't completely shut.  It was closed enough to not appear ajar at first glance, but wouldn't stay closed if pushed against.  Apparently when our son let the dogs outside to use the restroom he didn't close it completely.

Yvaine was still barking behaving strangely.  My wife opened the door, looked outside, and saw one of our cats, Pippin, crouched at the edge of the deck.  He was very obviously freaked out, as he's never been outside.  She picked him up and brought him inside.  Then Yvaine stopped barking.

This is one of those very odd tales that is absolutely true.  Yvaine doesn't normally bark and carry on like this, even with noises.  She had noticed Pippin outside and was apparently really freaked out by this.  She acted this way to alert my wife to the fact that the cat was somewhere he shouldn't be.  I know it's anthromporphising a bit, but it was like Yvaine was saying "Hey, Mom!  Hey!  Um, my buddy's outside and he shouldn't be!  Hey!  Go check on him!  Hey!"  Without the barking my wife may not have noticed the missing cat until he had run off.

Pippin and Yvaine actually are buddies and will sometimes snuggle together.  She was just worried about her kitty friend, and we're glad that she's smart enough to let us know. 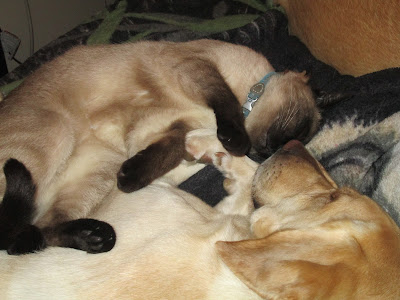 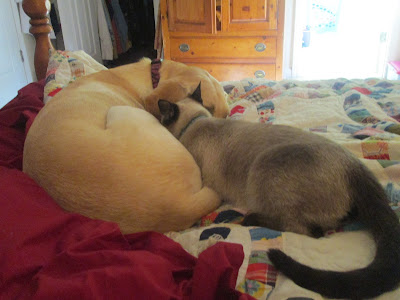