This Is Why She Can't Swallow

**WARNING** Mildly graphic images of surgery.......proceed at your own discretion.

Recently one of my associate doctors saw an elderly lab mix because she was drooling and was having difficulty swallowing.  She couldn't eat well and the owner couldn't figure out why.  On the initial exam a mass was noted far back on the base of the tongue, but my associate couldn't determine whether or not it was an abscess, inflammatory lesion, or tumor.  The dog was placed on antibiotics and initially seemed to improve, but then worsened again.  The growth was so far back in the throat that it was difficult to see the full extent.  She was scheduled for a day when I was in so that she could be anesthetized, the mouth more fully examined, and a biopsy sample taken.

When I first examined the dog I had a hard time seeing much in the mouth.  She was actively resisting me, making it difficult to get a good look at that part of the tongue.  There was no way I was going to be able to really know what we were dealing with until she was unconscious.

We induced anesthesia and I opened the mouth to intubate her and look down the throat.  This is what I saw. 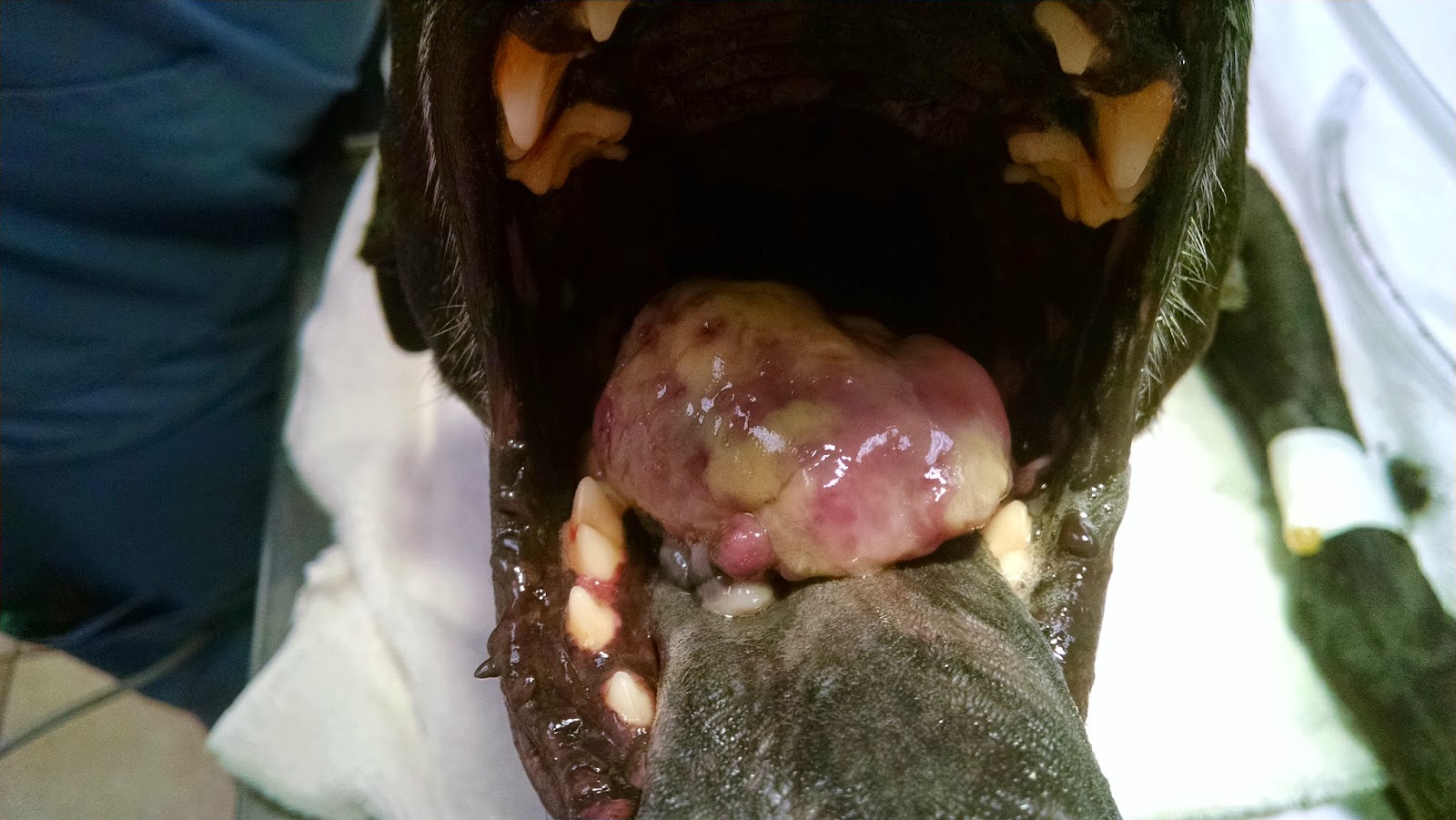 When I pulled on the tongue a little more it made the mass more visible. 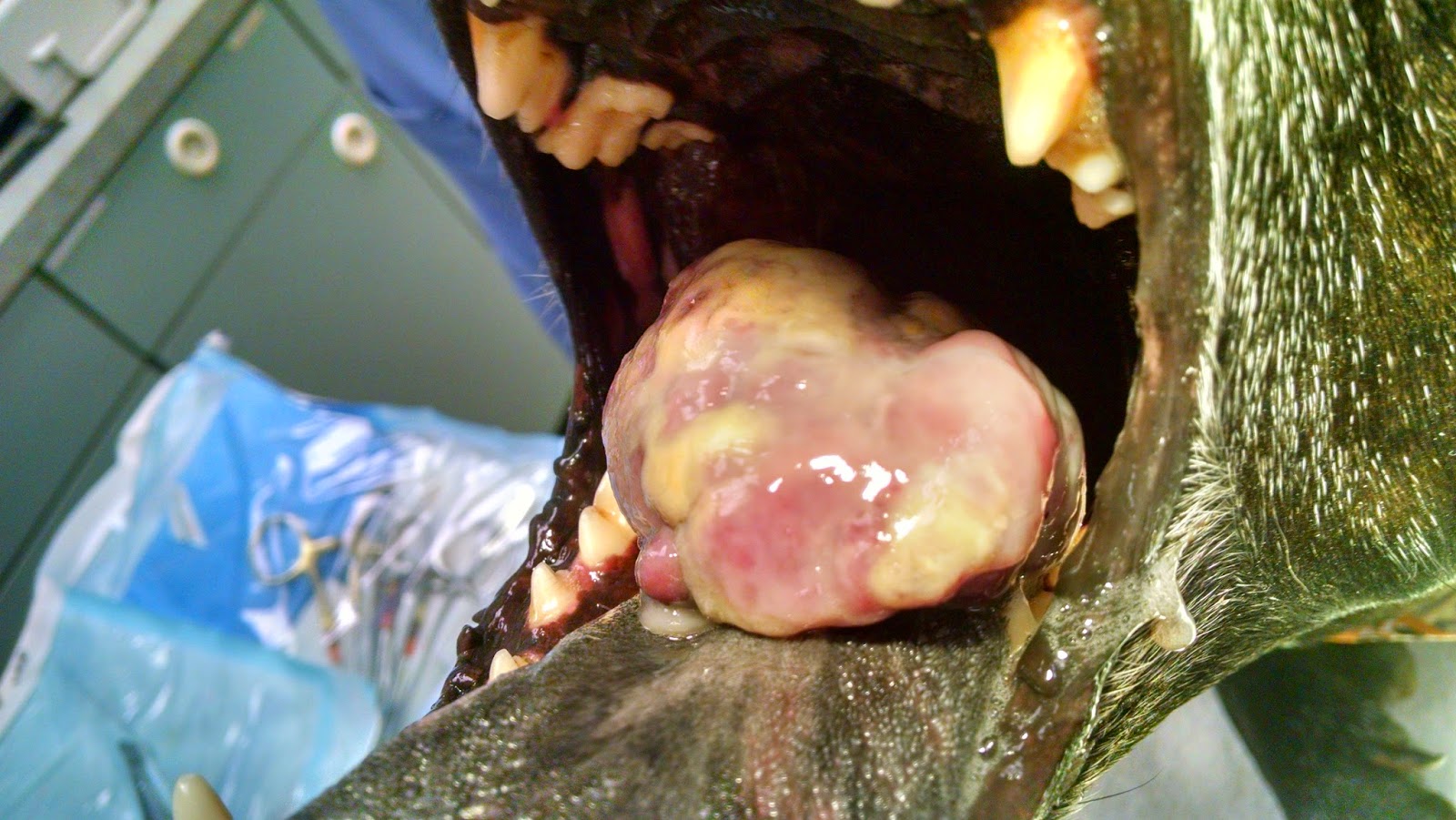 No wonder she couldn't swallow food!  This was growing from the very back of her tongue, essentially down in the throat.  It was big enough that it was blocking the back of her throat, allowing very little to pass by it.

I was very concerned, because as large as it was and in that location it was essentially inoperable.  It covered enough of the surface of the tongue that I wouldn't really be able to remove enough without taking a considerable amount of the tongue with it.  But as I felt around and examined it I realized that it looked worse than it really was.  There was a surprisingly narrow stalk growing from the surface of the tongue and then the mass bloomed outwards kind of like the structure of a mushroom.  In fact, it was narrow enough that I thought I'd be able to remove the whole thing with minimal damage to the tongue itself!

After a quick call to discuss the new findings, the owner agreed to let me try and take it off completely.  Here's what it looked like just prior to surgery. 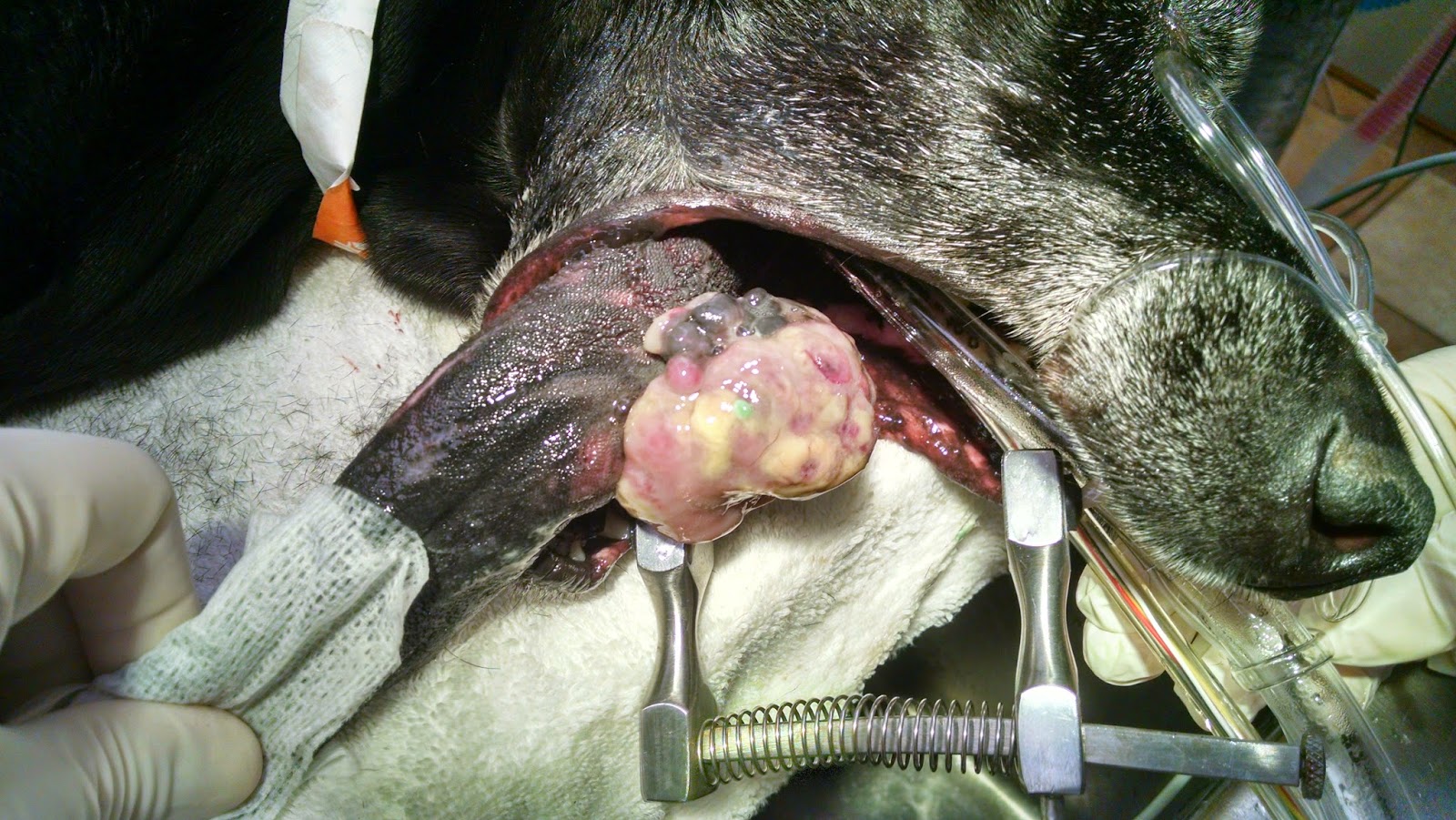 And just after I removed the mass. 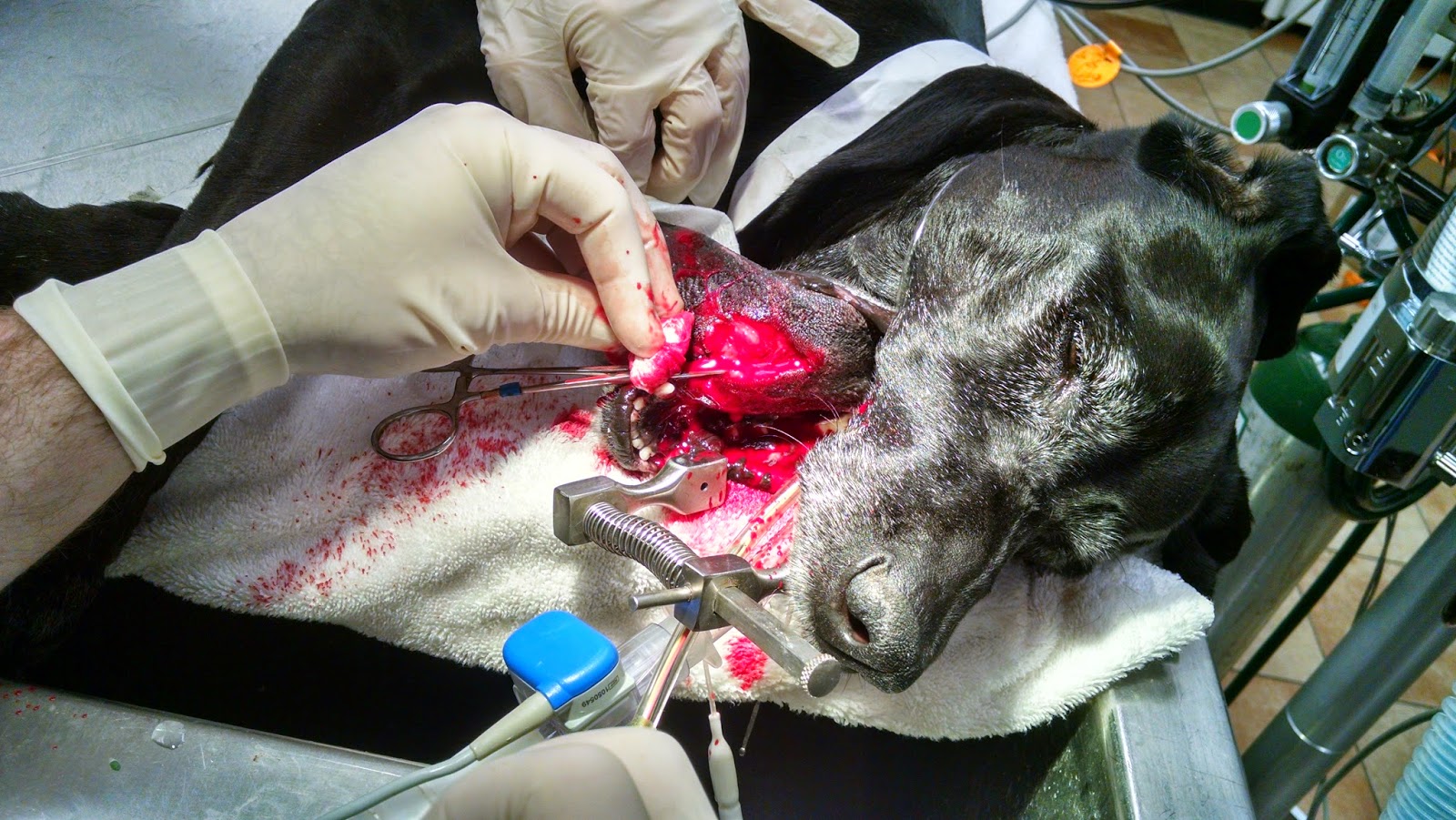 It appeared to be growing superficially and didn't obviously penetrate deep into the muscle of the organ.  I was able to get a small distance around the base, though I couldn't get the 2 cm margins that we ideally want when removing an unknown tumor.  The tissues came together nicely and the bleeding stopped quickly.  Here is what it looked like immediately after surgery was completed. 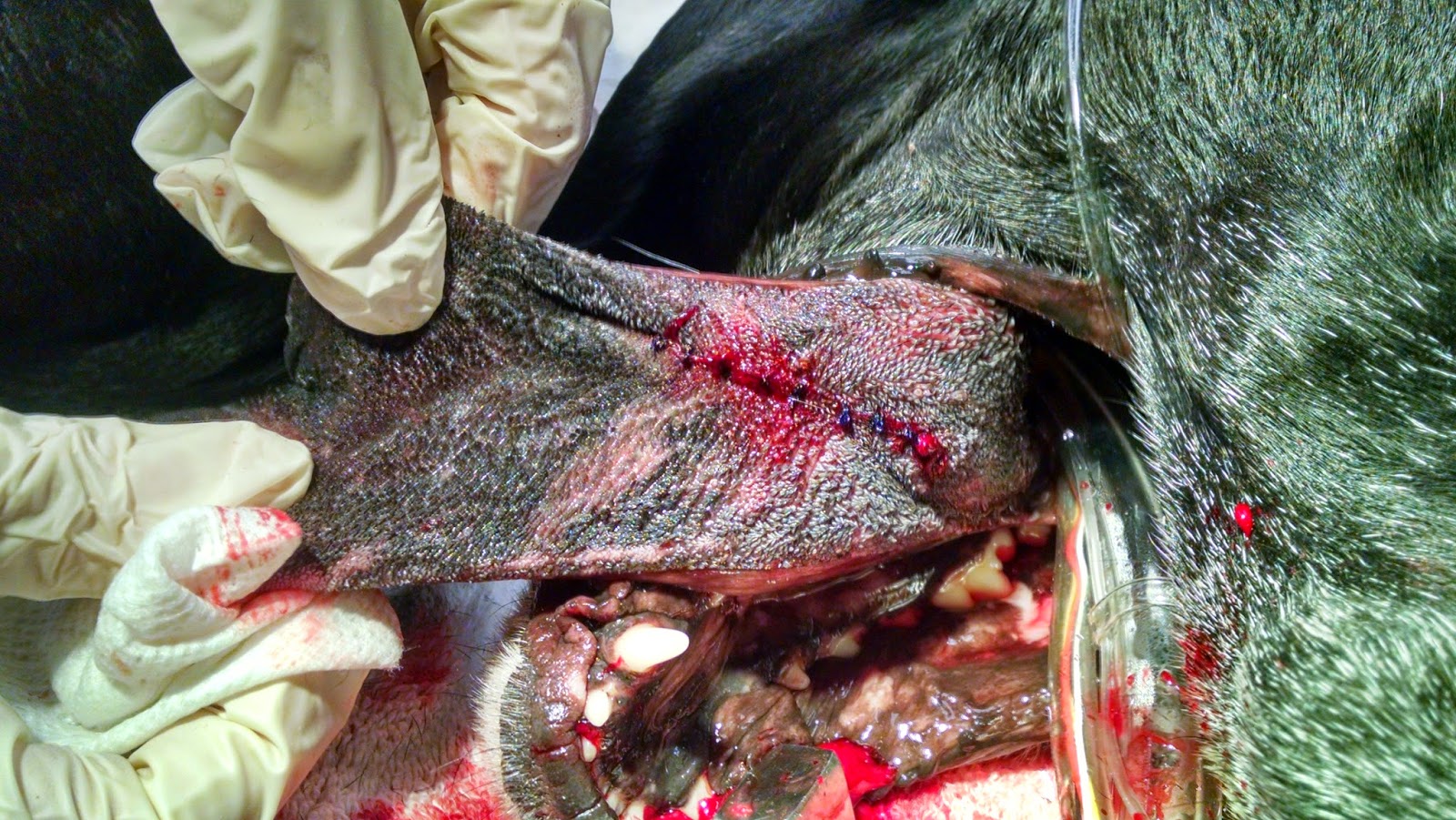 Here's a better look at the tumor itself post-operatively.  The whole thing was about 5 cm in diameter. 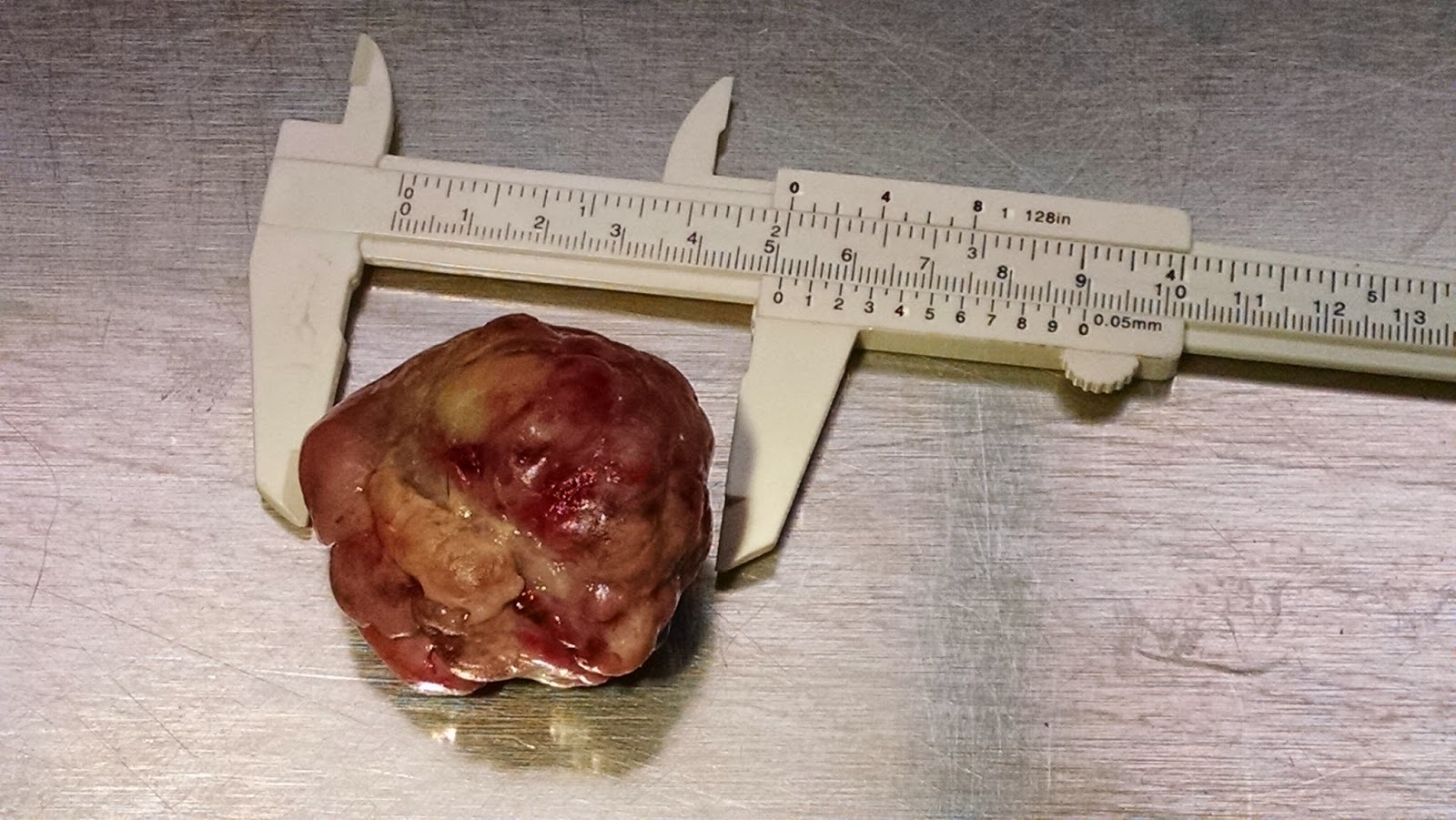 This is the underside of the mass, with the calipers showing the diameter of the tissue I actually removed.  The stalk itself was only about 1 cm wide, about 20% of the total size of the mass. 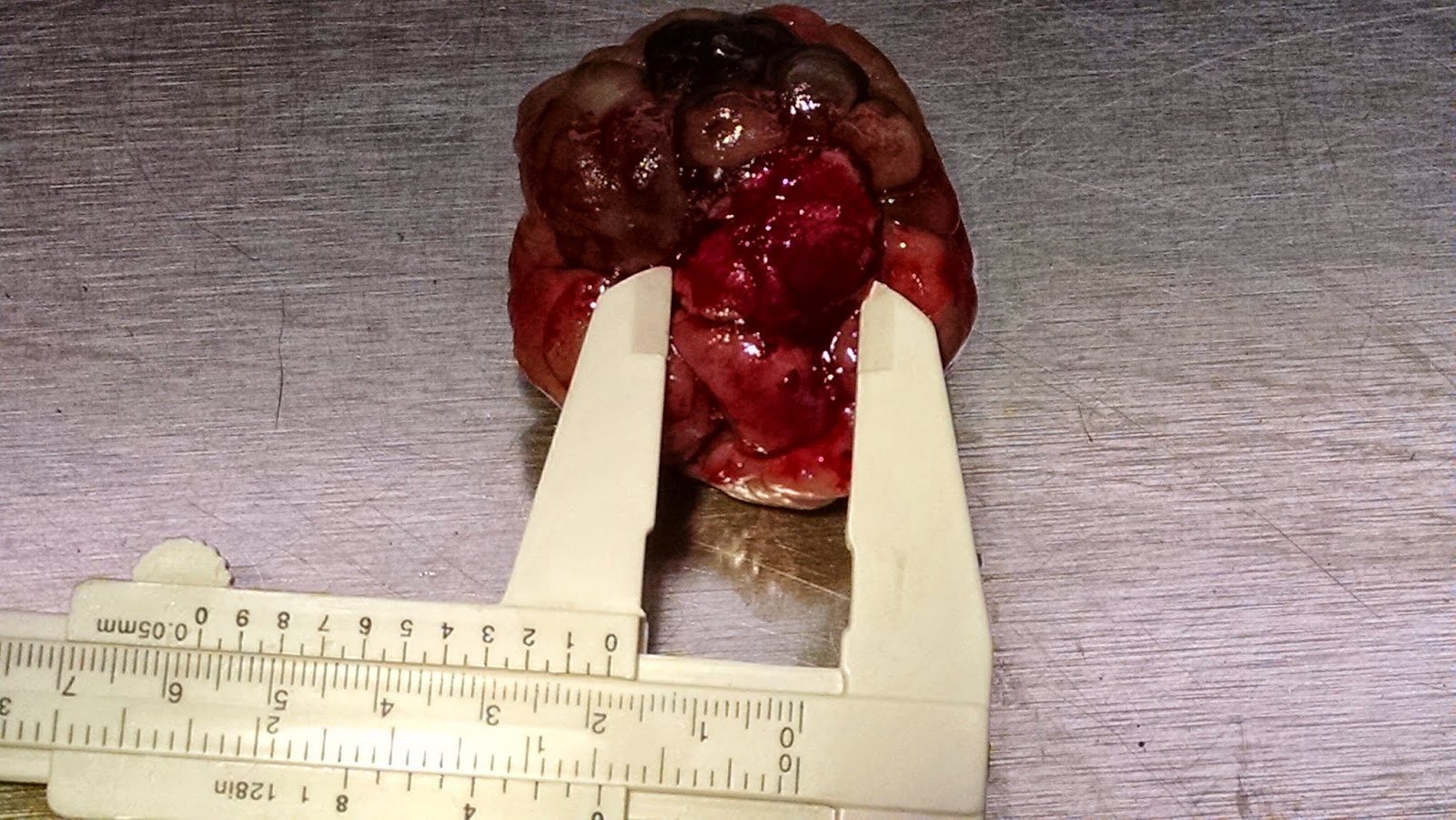 The dog recovered well and went home that night.  We talked to the owner the following morning to check on her, and they said that she ate like crazy that night.  Even with the soreness of the tongue, she was finally able to pass food down her throat!

The biopsy report came back as malignant melanoma, which I had strongly suspected based on its appearance. Thankfully the surgical margins were clean and there was no evidence of invasion into lymph tissue, so we may get lucky and not have any recurrence.
Posted by Chris Bern, DVM at 6:52 PM