Lessons From The Flu Outbreak

A few months ago I blogged about the recent canine influzena outbreak that happened here in the US.  At that time I had few concerns and worried about the panic that the media seemed to be fostering.  Little did I know that I was going to face the problems in my own clinic and have some of my views changed.

The last time I blogged about this issue we had barely started seeing any cases in the Atlanta area.  Back then I had no idea that we would become the number two hot-spot for canine influenza in the country.  Several local boarding facilities had outbreaks and had to temporarily shut down in order to to thoroughly clean and disinfect.  It hit the news outlets and resulted in numerous calls to area veterinarians.  At my own clinic we diagnosed a couple of cases and had others that we suspected of being influenza.

I've been practicing for 18 years and I've never seen a disease spread this quickly and this widely.  It happened so fast that I don't think the profession was really ready or knew how to prepare.  The distribution of the cases has also been odd, with the two worst affected areas being over 600 miles (965 km) apart.  I haven't heard of anyone confirming it, but I suspect that it has to do with the large airports in both cities.

Because of the severely contagious nature of influenza we were telling people to keep their pets at home if there were only mild symptoms such as coughing or sneezing, but the dog was otherwise doing well.  If we had a more severe case we treated it with utmost care.  My staff wore disposable protective gowns, gloves, and limited suspected cases to a single exam room.  For cases that needed to truly be hospitalized for supportive care we planned on referring to local specialty clinics who had set themselves up as true isolation facilities.  Thankfully we didn't have to go that far, but the disease is extremely contagious and we didn't have the setup to keep them ourselves.  If we had tried to hospitalize an influenza case ourselves we would have put every other dog at risk.

The veterinary college at Cornell University has been tabulating and monitoring the spread of canine influenza across the US, with the most recent data released July 28th.  The patterns are interesting. 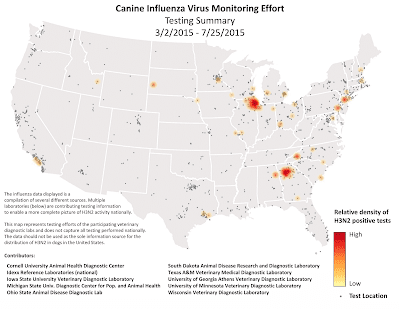 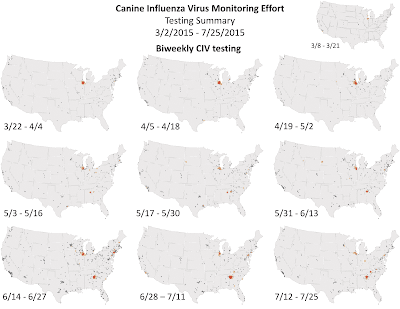 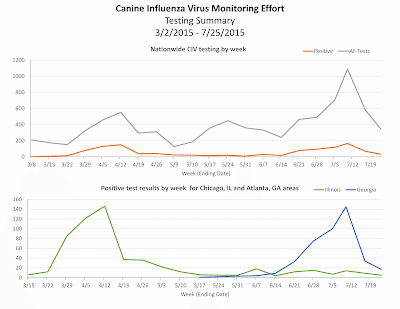 You can see that even though Atlanta and Chicago were hit hardest, there are multiple pockets of infection throughout the country.  There is a strong likelihood that we will continue to see outbreaks and new areas affected.

In my area the immediate crisis appears to be over.  However, the virus is now in the environment and the dog population.  We're now going to have to continue to watch out for pets presenting with possible flu symptoms and handle them appropriately.  This is a new normal for the veterinary profession.