As I've posted about several times, my whole family is involved in community theater.  It's a really fun hobby and I've been involved in everything from Shakespeare to farce comedies.  My wife and I do two to three shows per year, and are currently about to open on our latest one, The Crucible by Arthur Miller.  It's a classic story with some incredible language.  I have a relatively small role, that of Thomas Putnam.  Here's a photo of me (on the left), having grown out my beard for the show. 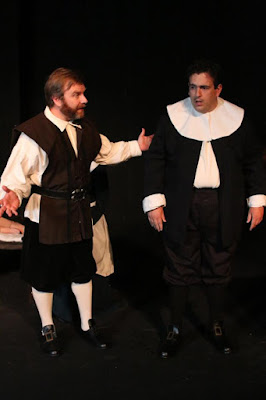 While acting is fun, it can be quite a stressful time when combined with my regular job.  This week we've been in "Tech Week", or as it is often called, "Hell Week".  For those of you who aren't thespians, this is the period just prior to the first performance where you rehearse every night in full costume to try and work out the kinks, lighting, sound, and so on.  It is a lot of work but it is important to get everything as perfect as possible before we have an audience.  My problem is that I've been doing it after a full day at work.

I leave for work about 8:15 in the morning so that I can get to the clinic before 9:00.  I work until 7:00 in the evening, and lately have been busy enough that I haven't been able to take much in the way of a lunch break.  Typically I'm eating lunch while writing up medical notes and calling clients.  I leave work and go directly to the rehearsal, getting there around 7:30.  The show has about a three hour run time, so with a break at intermission and discussions with the director I'm not getting home until after 11:00.

Take a 10 hour work day, add three and a half hours of acting, throw in driving time, and all this week I've been spending a total of nearly 15 hours away from home.  By the time I get home at night I'm absolutely exhausted.  At the end of this week I will have done that for five days in a row.

I'm looking forward to Monday, which I have off work and where I won't have anything to do with the play.  I will definitely be sleeping in that day!
Posted by Chris Bern, DVM at 12:10 AM