My latest foray in acting has me and my wife cast in our community theater's production of A Christmas Carol.  The director wanted me to have facial hair appropriate to the period, and I'm generally game for doing whatever is needed.  After all, facial hair can be cut, trimmed, and regrown.  I've done a lot of different styles over the years, but this was a brand new one for me. 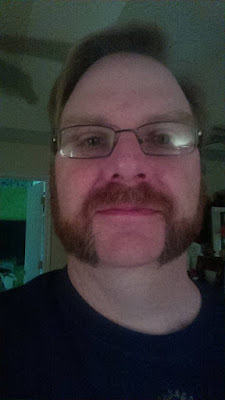 I went from a beard to this yesterday morning.  When I was done shaving we called our kids into the bedroom.  My daughter just stared in disbelief for a full minute.  My son took one look, went into his bedroom and slammed the door.  Neither one of them likes it when I do anything other than my typical beard or goatee.  They think it looks too weird, and I can't say that I blame them.  One of our dogs kept sniffing and licking my chin like she was trying to figure out what had happened to my face.

When I went to work this morning I was anticipating a number of strange looks.  Unfortunately I was rather disappointed.  I did see a couple of double-takes from my staff, but most of them have been with me for several years and have seen various kinds of facial hair styles on me, so I think they just took it in stride.  I'll admit that it disappointed me a bit as I was expecting bigger reactions.

I had several of my regular, long-term clients come in today, and not a single one of them said anything.  I'm sure they noticed, as all of them are used to my beard, and this is a VERY different look for me.  Heck, very few men wear this style in 2015, so it would stand out on anyone.  I'm certain that at least a few of them noticed it and had some kind of thoughts.  But how do you make that kind of comment to your doctor?  How easy is it to bring up your impression of "What the heck is he thinking?"

I think that many clients wonder about these changes, especially when a man makes such a drastic change.  To me this is a bigger switch than a woman getting a perm or shorter haircut.  I know that I'd quickly notice if my own physician suddenly had a bushy beard the next time I saw him, even though I typically only have to go in for an annual physical.  And I don't think I'd say anything to him.  So I'm sure my regulars will notice and remain silent.  Truthfully I wouldn't mind them mentioning it, as it's a great conversation starter and they might want to come to see the show.

Our first performance is this coming Friday and we have a three weekend run.  So it will be another three weeks before I can start going back to my normal look.

My son's still not happy about that.
Posted by Chris Bern, DVM at 11:22 PM