My kids sometimes get the small rubber "bouncy" balls like what you can get in vending machines.  I always warn them to keep them out of reach of our dogs, as I am worried that if one of the dogs swallowed one we would be doing surgery.

One of my clients learned that lesson the hard way.
They brought their husky in because he was vomiting and acting lethargic.  After some discussion I was suspicious that he may have swallowed something that had become obstructed in his intestines.  We took x-rays and here are the results: 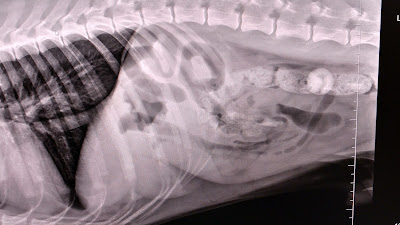 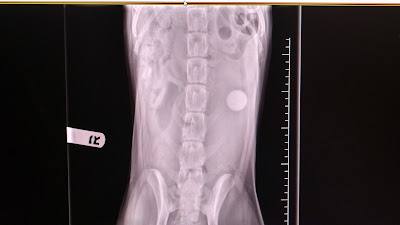 I think even the average layperson can see the obvious round object in the abdomen!  It looked like a ball of some sort and when I showed the images to the owner the son said it looked like a bouncy ball.
We did surgery and I quickly found the object in the intestine.  The surgery was very routine (for this kind of procedure) and there was no damage to the intestine so I thought he would make a good recovery.
Here's a picture of what we found in his small intestine, after it was cleaned up. 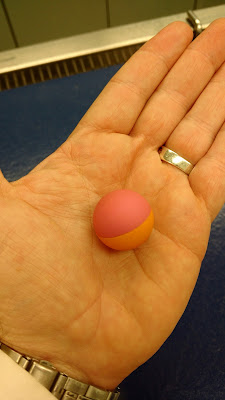 I went home that night and showed the picture to my kids, reinforcing the lesson I had previously given about being careful not to let our pets have access to these kinds of things.
I called the owner a few days later and the dog was doing great, back to eating with no vomiting.  That initial post-operative period is one of the most critical, so I have no reason to think he'll have further problems.  The owners did take home the ball, which I jokingly called their "$1000 bouncy ball" due to the cost of the surgery.  I think they'll be a bit more careful in the future!
Posted by Chris Bern, DVM at 7:01 PM