Waiting On Surgery Is Sometimes The Best Option

I love soft tissue surgery and do some fairly advanced procedures.  I have no hesitation to jump in and open up a stomach or intestines to remove something that a dog has swallowed.  But despite my interest in this part of veterinary medicine I never want to do a surgery without it being absolutely necessary.  Every surgery carries at least some risks, and GI surgeries are riskier than most.

Recently a client came in because her dog had chewed up a toy tire and had vomited up some of the pieces.  One of our associate doctors took x-rays and saw a large number of pieces of the toy in the stomach. 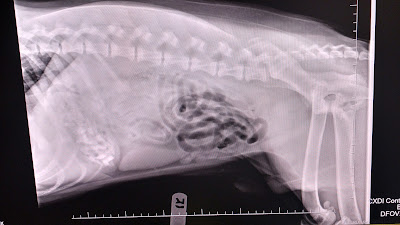 On the above image you can see small white pieces on the lower left side of the radiograph, which is the stomach.  If you look closely you can see that these pieces actually fill up most of the stomach.  And this was the day after the client noticed the pieces that were vomited up.  There was a high likelihood that the toy pieces weren't going to pass through and surgery was going to be necessary.

The other doctor saw this dog later in the afternoon, too late to jump right into surgery.  Since the dog was stable it was decided to wait until the next day when I would be there since I was more experienced with these kinds of procedures.

I saw the dog that morning and he was wagging his tail and acting normal.  I told the client that I wanted to repeat the x-rays to see if there was any movement of the pieces.  They were hesitant to do so because of the additional cost and the fact that 24 hours after chewing it up the toy was still in the stomach, suggesting that it wouldn't pass.  But I explained that if the x-rays showed it was out of the stomach we may not need to do surgery; and even if it had started to pass I'd have a better idea of where to look during surgery.  Finally, though somewhat reluctantly, they agreed.  Here are the x-rays on that day (the day after the one above). 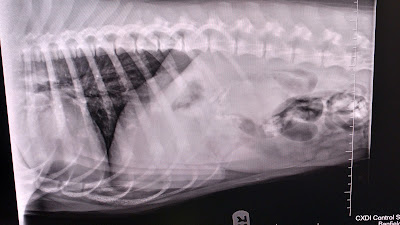 Compare this image to the one above.  The white pieces are no longer in the stomach!  You can actually see them in the intestine on the far right.  So I took some additional views to better see exactly where it was. 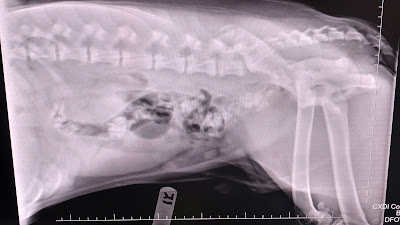 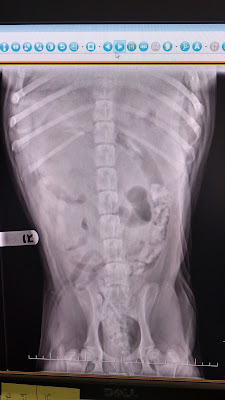 If you look closely you will see that pretty much all of the pieces of the toy are in the lower digestive tract.  Specifically they are in the colon.  This is most easily identified on the lower image with the pieces fully in a tubular shape on the left side of the abdomen (right side of the image).  The colon is the widest part of the intestinal tract, so if something has made it that far it has already gone through much narrower and more winding areas.  So if an object has made it to the colon, it is virtually assured that it will pass the rest of the way in an upcoming bowel movement.

The repeated radiographs showed that no pieces remained in the stomach and everything had passed into the colon.  I said that the next time the dog defecated he would pass most of the toy pieces.  We decided to postpone surgery and watch the dog.  He did fine and was acting normal and eating well the next day.

By spending less than $200 on x-rays we avoided a $1500 surgery and the associated risks.  If I had just gone straight into surgery without repeating the images I would have discovered the pieces in the colon after having found an empty stomach and intestinal tract.  That's not the time that you want to learn that surgery wasn't necessary!  If it had turned out that the pieces were still in the stomach w would have headed to surgery and I would have had a much better idea of exactly what to expect.  Either way the x-rays were necessary and important.

This was a great case of why not immediately jumping into surgery is sometimes the best option.  But that's not always the case.  In my next post I'll talk about a similar situation with a different recommendation and outcome.
Posted by Chris Bern, DVM at 10:24 PM