Macbeth: The Triumphs And Trials Of Live Theater

This past weekend I finished up a run of eight performances as Macduff in Shakespeare's tragedy, Macbeth.  I've acted in community theater for several years and this is my third time doing a Shakespeare play (previously having been in Much Ado About Nothing and Romeo And Juliet).  My wife and I are big Shakespeare fans and love the Bard's works, auditioning for them whenever we can.

Live theater is a lot of fun.  Every night you perform is a new chance to do amazing things.  A good audience will absolutely make you feel energized and can improve your performance.  It's a lot of work, but the payoff can be amazing.

In one scene of Macbeth Macduff's wife and son are murdered, which drives Macduff to hunt Macbeth for the rest of the play.  My wife played my wife and my daughter played the son (she's young and slim enough to pull it off).  As written this is a very short scene without a lot of drama.  But our director expanded it to give the murder more impact.  Rather than just killing the son, the murderers (who in our version were also the three witches) torture him slowly.  Then instead of just killing the wife she is thrown into a wall and dragged through the audience screaming.  Many people said that they cried after seeing this scene, and couldn't believe how powerful it was.

Here are a few photos to show what I'm talking about (from a rehearsal, so these aren't the real costumes). 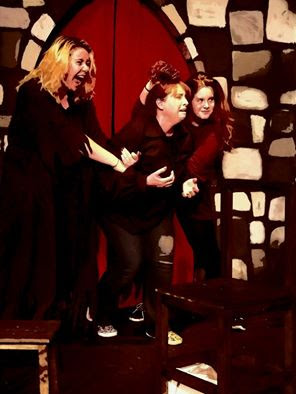 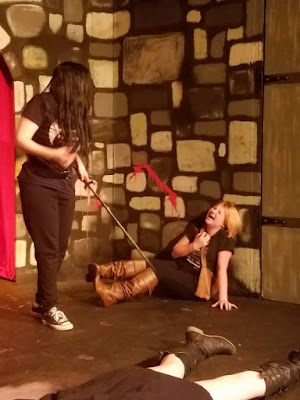 That splash of red on the wall?  That's my daughter's blood.  Or rather, a blood packet that she hides in her hand and squeezes when she is stabbed.

This show had a LOT of blood!  As we were doing this before Halloween the director wanted to emphasize the horror aspects of the story.  So the witches were portrayed as truly frightening and he designed various ways to have blood spray during appropriate scenes. 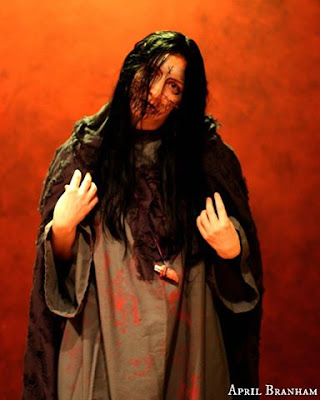 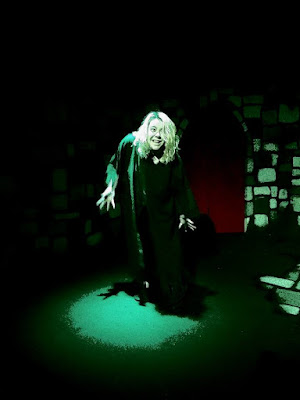 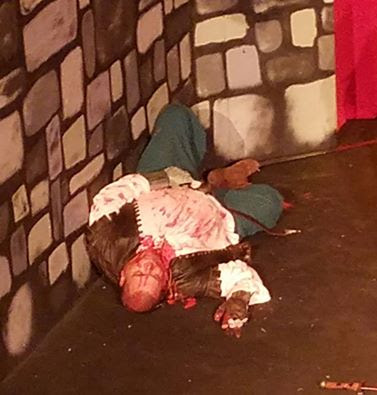 While these scenes were very powerful, they were the source of a few of the trials of live theater.  Since my wife was only in one scene, she doubled as the costume designer and helped prepare blood effects backstage.  Her biggest frustration was that the blood got everywhere!  When we first started dress rehearsals most of the shirts were white.  She planned on cleaning them every night but quickly discovered how difficult that was.  So she ended up dying several shirts red to make it harder to see the spots that she couldn't easily get out.  But blood spots somehow ended up on clothing that was never worn during bloody scenes.  I was never involved in any scenes where any blood sprayed, yet somehow I had a few spots on my shirts.  It drove her crazy having to keep the costumes clean with so much fake blood going everywhere.

That blood also ended up on the stage, which made footing potentially treacherous.  In a few performances there was so much blood before one of my scenes that the actor playing Prince Malcolm and I had to be careful not to step in it, yet because the bleeding happened in a previous scene at a different location we also had to ignore the blood since our characters wouldn't have seen it.  One night going off stage at the end of the scene he stepped in a puddle of blood and slipped, almost falling down.

In live theater you don't get retakes!  If you miss a line, miss a cue, or step in blood, you can't yell "cut" and go back to the beginning.  You have to just keep going on and try to make the best of it.  Good actors can cover their mistakes or those of others, and often the audience never knows that a mistake was made. This happened to me during a few performances, especially when I was supposed to be very intense and passionate, yet I usually only ended up mixing up some words.  If you didn't have a script in front of you the average person would never notice. 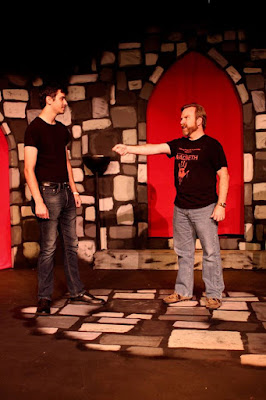 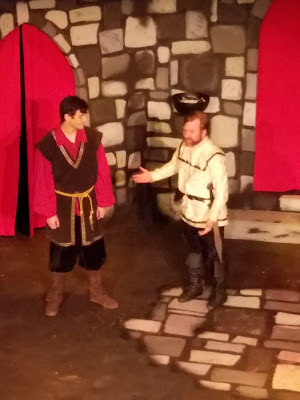 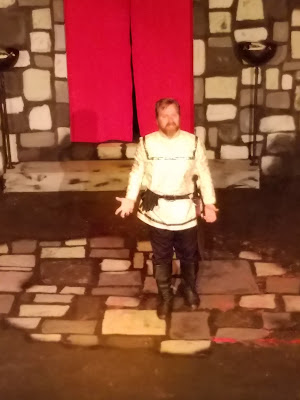 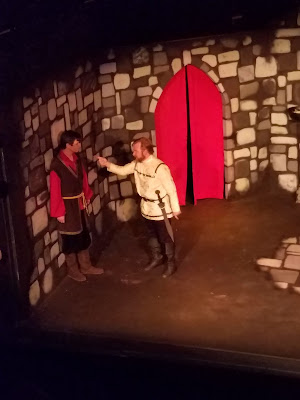 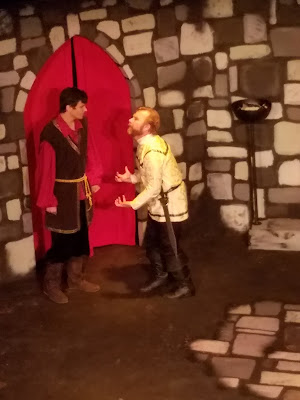 One of the things I loved most about this show was the fact that I got to have a climactic battle with Macbeth, and my character ends up killing him at the end.  I've always loved cinematic sword fights and our director is also a great fight choreographer.  There were many very intense fight scenes and I was in only one, but it was arguably the best one because it was the culmination of the entire play.  Everything led to that moment.  And it was a blast! 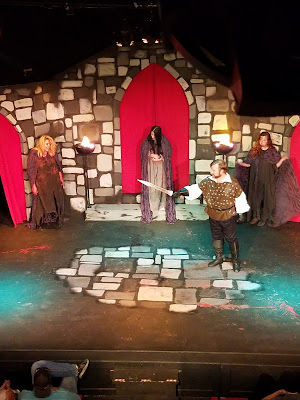 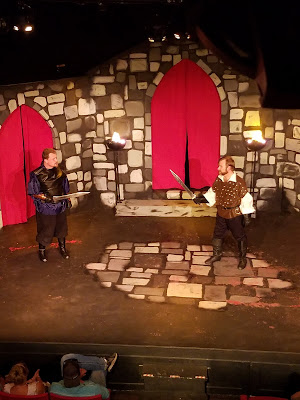 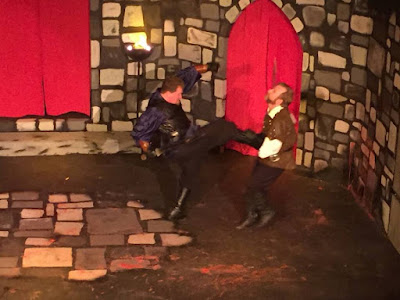 However, as triumphant and exciting as a good stage fight can be, it is also filled with potential pitfalls.  We were using heavy metal swords, and even though they didn't have an edge they could still be dangerous.  We had to practice our moves again and again in order to make it look spontaneous and realistic, yet still be safe.  We also threw punches and kicks, timing it so that it looked like we made contact even if we didn't.  But accidents happen.  During one of the last dress rehearsals a fist grazed my face.  At the time I barely noticed it but a few days later my wife saw that it had developed into a black eye.  A few times on stage either me or the Macbeth actor missed a swing, and we had to try and cover that mistake while still being convincing.  In the opening night performance I stumbled at one point and actually fell down during the middle of our fight.  We couldn't stop, yet we had to be safe.  I managed to scramble back up in time to continue the fight.

Most people seem to think of Shakespeare as boring.  They are probably remembering having to read it in school.  In my opinion, we shouldn't be teaching his plays as literature.  Literature should be read.  Plays should be performed or watched.  There are so many things in a play that don't come across in the written word.  They are only obvious when you have an actor who understands the words and can bring that out with real emotions.  That's how the Bard intended his plays to be enjoyed. 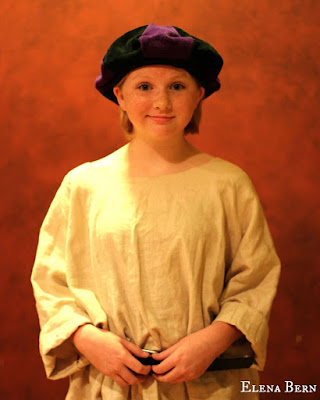 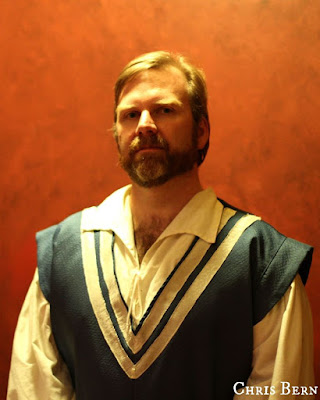 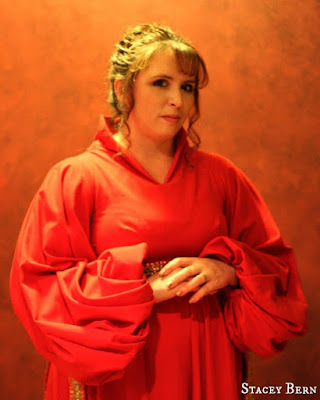