On October 17th my wife and I celebrated 18 years of marriage.  Though it hasn't always been easy (I can be difficult to deal with), it has always been worth it, and I am truly more in love now than back in 1998.  We have a great relationship and still very much enjoy being with each other and doing things together.  She really is my best friend and there is nobody else I'd rather spend time with.  To us, 18 years sounds like a long time but doesn't feel like it.

I had to work part of the day last Monday, though I left work early so we could celebrate our anniversary together.  Part-way through the day I was thinking of what we could do besides going to dinner.  There were no romantic movies in theaters, so that was out.  Then it hit me....tattoos!

Yes, that may seem strange at first glance.  But we've been talking about them for years.  The only reason I hadn't done it yet was because I hadn't decided on something that I could live with for the rest of my life.  Since tattoos are so permanent, I wanted the choice to be something that I was unlikely to regret later on.  I've toyed around with different thoughts and concepts, but one of the things I wanted was something that would remind me of my wife and symbolize our love.  When the idea first came to me that day I really didn't know what I wanted to get, so I quickly jumped on the internet for ideas.

I knew it would likely be something Disney themed since my wife is practically obsessed with that company's movies and parks, and my whole family loves them.  I looked at a few ideas (just Google "Disney couples tattoos"), and narrowed it down to a few.  Then when I got home I sprung the idea on her.

She didn't say no.  After dinner I asked her again.  She joked a bit but still didn't say no.  Earlier in the year I had talked to one of my clients about her tattoos and she recommended a parlor close to where we live.  I drove us over there and and as much as my wife protested she was fully prepared to do it.  We picked a design from what we had looked at earlier, had the artist draw them up, and then sat down in the chair to go through with it.

I have to interject something for a moment.  I don't like needles.  Yes, that's strange coming from a veterinarian.  But when I've had to have blood collected from me I've nearly passed out.  I donated blood several times and each time they had to work to keep me from going unconscious.  I often joke that "I'm great on the giving end, but no so great on the receiving one."  So I wasn't at all certain how I would do and if we'd even be able to finish on me.  I wanted to make the attempt, though.

It hurt.  Not a lot, but it wasn't pleasant.  A few minutes into it I actually thought about telling him to stop as I was feeling warm and clammy.  I've passed out enough times in the past to know what it feels like as I get closer to that point, so I waited a bit.  And thankfully the moment passed and I did fine.  I can't say that I enjoyed the sensation of the needle, but neither did I hate it and I certainly did tolerate it. 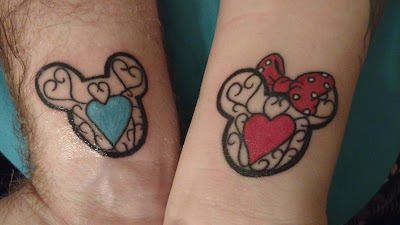 The tattoos are on the inside of my right wrist and her left.  We did it this way so that when we are walking with me on her left side and we hold hands, the Mickey and Minnie will be facing each other.  Yeah, that's a bit sappy and sweet, but that kind of sums up our marriage.

It's only been a week, but so far I have no regrets.  My staff and coworkers think it's really nice and were excited to see me get my first tattoo.  I'm glad that I work in a clinic that actually allows visible tattoos, which wasn't the case until a couple of years ago.  But this kind of body art is becoming more widely socially acceptable, and for over 20 years I've been able to appreciate it as an art form.

I have a few other ideas for new tattoos, but those will have to wait a while.  For now I'm just excited that whenever I glance down at my wrist it makes me think about my wife and our bond.  My wedding band gives me these feelings also, but the tattoo is another visual reminder, and one even more specific to our relationship.
Posted by Chris Bern, DVM at 12:14 AM