A Thespian's Guide To Life

For the last 2 1/2 months my wife and I have been rehearsing for a community theater production of Shakespeare's Much Ado About Nothing.  For the last couple of weeks the rehearsal schedule kicked into high gear as we neared our performance dates (hence my lower posting frequency on this blog).  What an experience this has been!  My wife is the major thespian in the family and has far more experience than myself.  Though I enjoy theater and have a certain amount of raw skill, I don't feel the strong draw to it like she does.  I also absolutely hate memorizing anything, which makes it a challenge to learn lines.

For the past two mornings we have performed for local schools, and tonight we have our first performance in front of a "real" audience.  Two performances tomorrow will finish out this brief run.  And I have to admit that I have enjoyed this far more than I expected to.  The cast is great, and my wife and I have made several new friends.  They are a fun group to be around, and there is a good mix of people, with some having performed for 30 years and others having limited experience like me.  I have done church plays and a couple in high school, but nothing on this scale.  The audience this morning had around 400 students, and were really into the play.  And I haven't had problems with stage fright, which I have been very glad for.

One of the things I realized today is that there is a real energy with a good audience.  I have heard about this, and my wife tried to explain it to me.  When you have an audience that is obviously enjoying the performance, the actors can feel it and draw on that energy to enhance their acting.  This morning's audience was like that.  Much Ado is a comedy, and yesterday's group didn't seem to get that as much.  Today's was laughing quickly and easily, which excited the whole cast.  I started feeling that myself, and couldn't believe how good it was to share that.  I had to admit to my wife that I'm starting to understand why she likes performing, and that I wouldn't mind doing this again.  She takes great amusement from these sentiments, as I complained heartily about having to learn my lines and that I wish I had a smaller part.

In a few hours we step onto the stage again to make some magic.  I'm actually looking forward to it.  So here's a glimpse of my wife and I as Margaret and Borachio. 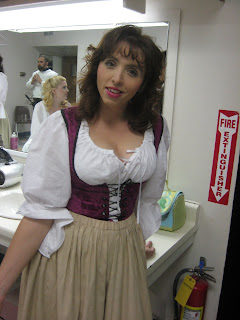 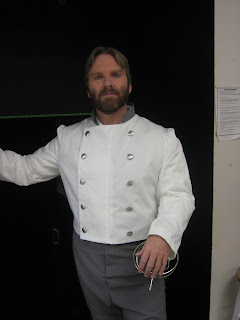